Gonzaga strikes a deal to get more out of tournament success 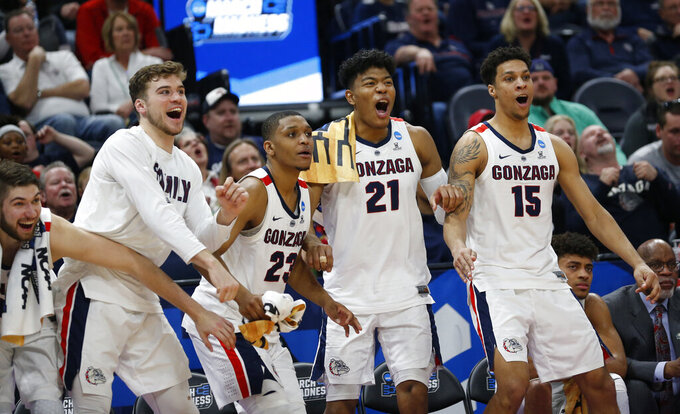 Gonzaga's bench celebrates during the second half against Fairleigh Dickinson during a first-round game in the NCAA men’s college basketball tournament Thursday, March 21, 2019, in Salt Lake City. (AP Photo/Rick Bowmer)

When leaders at Gonzaga were looking to sweeten the pot for their basketball team in exchange for staying in the West Coast Conference, they knew exactly where the money might come from.

With the perennially contending Zags being courted by the Mountain West, athletic director Mike Roth sought a way for WCC teams — namely, his team — to get paid for winning in the tournament, and to move away from the even split of tournament revenue that most conferences prefer, regardless of who wins.

In reality, many conferences' revenue-sharing arrangements aren't all that "American," per se, in that they don't abide by one of the main concepts of capitalism — you earn what your product is worth in the market.

Instead, the Power Five leagues and many of the mid-majors divide money evenly, regardless of how their teams perform. It means that one team's run in March Madness is good for everyone in the conference, but it can also lead to some crazy discrepancies.

For instance, Northwestern, which has been to the tournament a grand total of once, has received $28 million more than it has contributed to the Big Ten coffers via the tournament since 1997, according to an Associated Press analysis of more than $3 billion paid through the system.

Oregon State, another infrequent March Madness participant, has taken in nearly $23 million more in hoops money than it has contributed.

It's not all that big a deal to the big boys, considering the basketball money makes up no more than 10 percent of the overall revenue the Power Five conferences dole out each year; football TV contracts and money from bowl games and the College Football Playoff make up a sizable portion of revenues, which total more than $600 million annually for the biggest leagues.

But in the West Coast Conference, and a lot of other mid-majors that don't have big football television contracts, that NCAA basketball money is a much bigger piece of the pie. The thought of teams in the lower half of the conference making money based on the success of winners doesn't go down as smoothly.

Gonzaga had been in that position for a long time.

According to statistics compiled by the AP, the Zags brought in more than $51 million to the WCC since 1999 based on their success — 21 straight NCAA appearances, one Final Four and, most recently, five straight trips to the Sweet 16.

The NCAA suggests that conferences split the money evenly among all members, which would pay Gonzaga $9.1 million, but the Zags negotiated a new deal to reap an even bigger share starting with money earned from this year's tournament.

Under terms of the compromise, the conference will now divide the first unit of tournament revenue evenly among the 10 teams, but give the teams a larger slice of any additional units they generate by winning games. This year, an NCAA unit is worth at least $1.68 million — an amount likely to grow over six years of payments. Every conference with an automatic bid gets one unit to disperse as it sees fit. Gonzaga has produced a total of 50 units in the 1997-2018 period studied by The AP. The other nine teams from the WCC have combined for 40.

"We all have the same opportunity when the year starts," Roth said. "And we felt that whoever advances should be rewarded more so than they had been in the past."

What passes as a big deal in the West Coast Conference feels a bit more like pocket change to the big conferences.

In the last fiscal year, for instance, the Southeastern Conference distributed $43.7 million to each of its 14 teams. The SEC added Texas A&M and Missouri in 2011 — a move that only added strength to a conference that already had perennial powers in football (Alabama) and basketball (Kentucky).

"Winning's a big deal," SEC commissioner Greg Sankey said. "Whether it's baseball, basketball or football, we're trying to be successful."

While maintaining a successful conference is, of course, a product of everything from NCAA Tournament bids to the size of the TV deals, winning in March Madness has virtually no impact on the revenue distribution for these big conferences.

The SEC doles out its shares perfectly evenly, meaning that Auburn, Kentucky, LSU and Tennessee — all headed to the Sweet 16 — will make just as much for their success this season as will Vanderbilt, which went 0-18 in the conference and fired its coach.

"The rules of engagement are what they are and you do your best to navigate within that," said Auburn athletic director Allen Greene, whose department brought in $147.5 million in revenues in fiscal 2017. "Other than that, I don't really have an opinion on it."

Gonzaga sure did. Over the past several years, it has continually looked for ways to improve its situation, and many of those searches have led to flirtations with other conferences.

The West Coast Conference, however, was reluctant to lose its headliner.

And so, they made a deal.

"We just felt that the more you advance, the bigger the amount should become," Roth said, "because at that point, it's not about the conference, it's the school that's earning it."