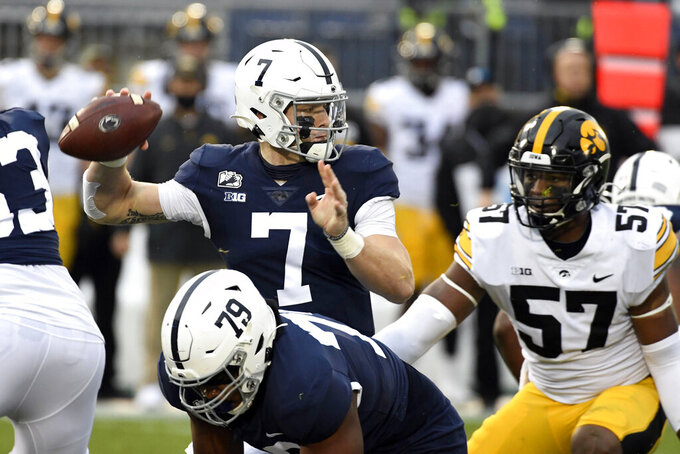 STATE COLLEGE, Pa. (AP) — Spencer Petras smiled and admitted he’s not the strongest runner when he has the football in his hands.

But Iowa’s quarterback doesn’t have to be, especially when the 300-pounders in front of him do most of the hard work like they did on Saturday in Iowa’s 41-21 win over Penn State.

Petras completed 18 of 28 passes for 186 yards and ran for a late touchdown to lead Iowa to its third straight win and first at Beaver Stadium since 2009. The Hawkeyes (3-2, 3-2 Big Ten) got a combined 179 rushing yards and three touchdowns from Mekhi Sargent and Tyler Goodson, who ran through wide-open lanes and cut around missed tackles to snap Iowa’s six-game losing streak in the series.

“A really good team win for us tonight,” Iowa coach Kirk Ferentz said. “I almost forgot how good it feels to come out of here with a victory.”

Iowa players presented Ferentz with the game ball in the locker room after the Big Ten’s longest-tenured coach won his 100th game in conference play.

“We’ll turn our attention to the next opportunity, because it’s going to come fast,” Ferentz said.

The points came quick for the Hawkeyes who scored on their first two drives, forced four turnovers and stymied the Nittany Lions (0-5, 0-5) on a pair of first-half fourth-down tries.

Iowa led 31-7 midway through the third quarter before Sean Clifford replaced Will Levis at quarterback for Penn State. Clifford completed a pair of touchdown passes for 96 yards in a 3:54 span that cut Iowa’s lead to 10 with just over a quarter left.

“We got in this situation together and we’re going to get out of it together,” Penn State coach James Franklin said.

A handful of chunk plays on Iowa’s opening drive set up a 40-yard field goal from Keith Duncan that opened the scoring. Penn State took its first lead since the final minutes of its season opener when Keyvone Lee scored from 6 yards out on his team’s next possession.

The first-half highlights ended there for Penn State who turned the ball over on three of its next four possessions before halftime.

The Hawkeyes took the lead for good on their next drive when Goodson capped a 75-yard drive with a 10-yard sprint to the goal line.

Penn State failed to convert a pair of fourth-down tries and fumbled on a botched pitch from Levis to Caziah Holmes. Iowa’s Zach Van Valkenburg recovered the loose ball and Sargent scored from a yard out to make it 17-7 eight plays later.

Iowa continued to take advantage of Penn State’s mistakes. Lewis added another 1-yard touchdown run, up the middle again behind sturdy blocking to cap a quick drive and give Iowa a 24-7 lead.

“It’s the guys up front,” Petras said. “Just a great job up front getting the push, I’ll take those guys over everyone.”

Petras scored on a 3-yard quarterback sneak in the third quarter before Clifford came off the bench and tossed a 28-yard touchdown pass to Brenton Strange. Clifford’s next pass came after an Iowa turnover and went 68 yards to Jahan Dotson for a score that made it 31-21 with 11 seconds left in the third quarter.

Duncan added a 24-yard field goal midway through the fourth. Penn State was driving into Iowa territory with less than 2:30 left when Daviyon Nixon intercepted a Clifford pass and returned it 71 yards for a touchdown.

At least 10 Hawkeyes had a hand in tackles for loss. Linebacker Nick Niemann led all players with 17 stops, but was more impressed with Nixon’s interception return.

“I don’t know if you guys have until midnight, but that’s how long it would take to tell those stories about him,” he said.

Penn State tight end Pat Freiermuth was not suited up and will miss the remainder of the season with an unspecified injury, Franklin said after the game. Freiermuth is the latest star to go down for the Nittany Lions, who are also without top two running backs Journey Brown and Noah Cain.

Star linebacker Micah Parsons opted out before the season started.

Iowa: The Hawkeyes minimized mistakes and capitalized on Penn State’s errors to stay mostly in control. They’ll get a pair of struggling squads in Nebraska and Illinois next, but will need some help to have a shot at the Big Ten West crown in the regular-season finale against Wisconsin.

Penn State: No Nittany Lions squad has ever been in this situation, winless through the first five weeks of their season. With few standout performances until Clifford entered the game, and with Freiermuth shelved, Penn State is playing for pride.