'This isn't for everyone': A labor of love for football refs 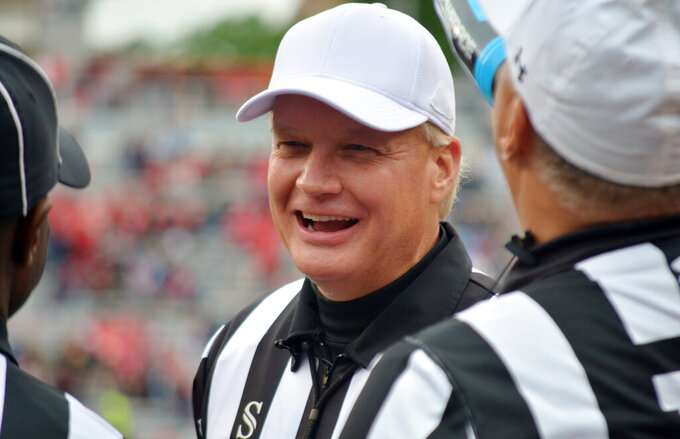 In this April 20, 2019, photo, Steve Shaw talks with a colleagues during Georgia's spring NCAA college football game in Athens, Ga. Officials are graded weekly on every play and those grades ultimately determine what conference they work. SEC officials have often worked their way up from the Sun Belt. Bowl assignments are determined by regular-season grades and poor grades can lead to demotions. Shaw, the national coordinator of football officials and the SEC’s head of officiating, said last week at the conference spring meetings that eight officials won’t be returning to the SEC this season. One moved on to the NFL and seven either retired or were not retained, Shaw said, declining to elaborate. (Gary McGriff via AP) 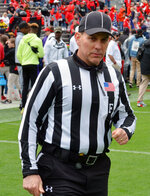 ATHENS, Ga. (AP) — It has never been more difficult to be an official in college football.

Those who do it face relentless, often uninformed criticism and attacks on their credibility. Complaints from fans armed with DVR, fueled by sports-talk instigators and amplified by social media, have become so intense the Southeastern Conference is exploring ways to publicly push back.

And the job — a part-time job at that — has never required more time and effort.

"This isn't for everybody," said Tom Quick, entering his 20th season as a Division I official, the last eight in the SEC after 12 seasons in the Big 12. "The level of scrutiny you have to deal with, the preparation it takes to succeed isn't for everybody."

Yet Quick is back for more, and he joined Grantis Bell, Phillip Davenport and five other veteran football officials this spring in Athens to give members of the media a crash course in how the job actually works. After coaching up the media crew well enough that it officiated most of Georgia's spring game without major incident, Quick, Bell and Davenport spoke to The Associated Press about what seems like the worst gig in sports and why they keep coming back to what is clearly a labor of love.

When Quick started, crews were seven people. Now there are eight on the field, two in the replay booth and three more manning the video center review at the conference office.

College football officials travel to the site of a Saturday game on Friday. Dinner and meetings Friday night last 4-5 hours. On Saturday, the crew does another 2-3 hours of prep and film in the morning before heading to the stadium two hours before kickoff. They survey the field, make sure players behave during warmups and meet briefly with head coaches.

After a game that can last three hours (at least) comes what could be the toughest part of the day: The review session with a game day observer on site that can take 45 minutes to two hours.

"So if you have a 7:30 kick, the game ends at 11. When you shower your postgame starts at midnight," said Quick, who is part-owner of a company that sells bonds and insurance to businesses. "You have a 5:30 departure out of Atlanta (Sunday) morning. That's a typical weekend."

Davenport quickly adds: "Then you get up and go to work on Monday."

Most officials have full-time careers that have nothing to do with football, but the work doesn't stop from Monday to Thursday. Film study and rules review throughout the week is a must.

"Yes, it's more stressful, but if you prepare for these situations that generally takes the stress level off," said Bell, a former West Virginia football player who has been officiating in the SEC for six years.

The challenge is both mental and physical.

Over-the-top scrutiny of officials in the youth and high school ranks appears to be pushing people away from the job, but the SEC officials said they don't believe the same dynamic is at play in the upper levels of officiating.

"You analyze and reframe every year with where everybody is health wise and the amount of time it takes to achieve at the highest level because it's a commitment for your family," Quick said. "And you weigh that against being away from your family and flying every Friday and going to clinics and going to scrimmages in the offseason and doing what you need to do to be successful and you have to figure out: Is it a good balance in my life?

"And that's what drives more officials away than anything is the commitment it takes. Perhaps because of the scrutiny, but the commitment made is increasing on us every year."

Pay is determined by experience and conference. A Power Five game can net an official about $3,000 after expenses. A game in the so-called Group of Five conferences generally pockets an official about $1,900. The numbers vary because officials book and pay for their own travel and lodging. They usually double-up in a hotel room.

Officials are graded weekly on every play and those grades ultimately determine what conference they work in. SEC officials have often worked their way up from the Sun Belt. Bowl assignments are determined by regular-season grades and poor grades can lead to demotions. Steve Shaw, the national coordinator of football officials and the SEC's head of officiating, said last week eight officials won't be returning to the SEC this season. One moved on to the NFL and seven either retired or were not retained, Shaw said, declining to elaborate.

Shaw said personal integrity and behavior is emphasized with officials more than ever.

The rising number of states with legal wagering on sporting events, including college football games, has heightened awareness in that area. FBI agents are brought in to speak to officials about how they can be targeted for inside information.

"They scare us to death," Shaw said.

Still, a check of Twitter on any fall Saturday shows many fans have little confidence in officials and the conferences that employ them.

"(Commissioners) all believe our fans think we've got the worst officiating in the country," Pac-12 Commissioner Larry Scott said. "Each of our fans tell us so."

The Pac-12 is awaiting results of an outside review of its officiating, prompted by a conference executive inappropriately involving himself in the centralized replay review process.

The SEC wants to be more transparent when officiating mistakes are made, but also more aggressive about getting the message out when officials get the calls right. That won't mean officials holding news conferences after games. Neither officials nor conference leaders want that. But "no comment" is not an acceptable answer anymore, Shaw said.

Quick thinks that kind of communication needs to come from league officials.

"It's just you're never going to convince everybody what you did or didn't do," Quick added. "'Oh, look they're holding here. No wonder they win all the time.' That's not a true assessment, but that's the world. That's why I don't read any of it."

The officials said they welcome a show of support from the conference, but it won't determine whether they stay or go.