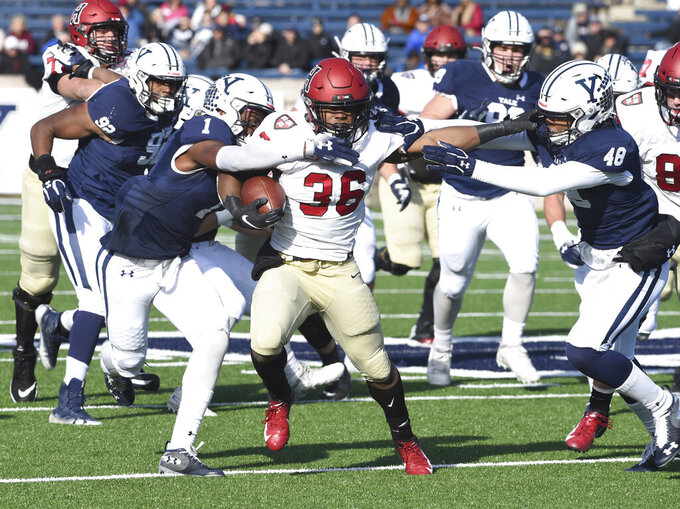 FILE - In this Nov. 23, 2019, file photo, Harvard's Devin Darrington runs against Yale during the first half of an NCAA college football game in New Haven, Conn. The Ivy League has canceled all fall sports because of the coronavirus pandemic. (Arnold Gold/New Haven Register via AP, File)

The Ivy League on Wednesday became the first Division I conference to suspend all fall sports, including football, leaving open the possibility of moving some seasons to the spring if the coronavirus pandemic is better controlled by then.

“We simply do not believe we can create and maintain an environment for intercollegiate athletic competition that meets our requirements for safety and acceptable levels of risk,” the Ivy League Council of Presidents said in a statement.

"We are entrusted to create and maintain an educational environment that is guided by health and safety considerations. There can be no greater responsibility — and that is the basis for this difficult decision.”

Though the coalition of eight academically elite schools does not grant athletic scholarships or compete for an NCAA football championship, the move could have ripple effects throughout the big business of college sports.

It was the Ivy League’s March 10 decision to scuttle its postseason basketball tournament that preceded a cascade of cancellations. All major college and professional sports were halted within days.

Football players in the Power Five conferences have already begun workouts for a season that starts on Aug. 29, even as their schools weigh whether to open their campuses to students or continue classes remotely. More than a dozen prominent programs from Clemson to LSU to Oklahoma have reported positive tests among their athletes in the few weeks since voluntary workouts began. Some have temporarily shut down the workouts, incluidng Ohio State and North Carolina on Wednesday alone.

Dr. Chris Kratochvil, the chair of the Big Ten’s infectious disease task force, said there is no “hard deadline” for a decision on sports.

“Of course, we watch everything that’s going on,” said Big 12 commissioner Bob Bowlsby, whose league has schools in five states from West Virginia to Iowa and Texas. “But we’re going to go forward and do our own evaluation, and so far our scientists and medical people are telling us that we should stay the course, and learn as we go and move slowly and evaluate as we go.”

The Ivy League announcement affects not just football but soccer, field hockey, volleyball and cross country, as well as the fall portion of winter sports like basketball. Wednesday’s decision means Harvard and Yale will not play football in 2020, interrupting a rivalry known as The Game for the first time since the two World Wars.

“This news is disappointing for all of us,” Harvard athletic director Erin McDermott said. “While the Fall 2020 experience will be unlike any other, I am confident that we will find positive opportunities in this challenging time. We will keep moving forward through this painful but temporary experience, together.”

The league said it has not yet determined whether some seasons can be moved to the spring. But the conference noted that its schools already are limiting gatherings, visitors and travel for students and staff.

“As athletics is expected to operate consistent with campus policies, it will not be possible for Ivy League teams to participate in intercollegiate athletics competition prior to the end of the fall semester,” the league said.

Ivy League schools are spread across seven Northeastern states that, as of mid-July, have seen some success at mitigating the spread of COVID-19. But most of those states still ban large gatherings; under the Massachusetts reopening plan, Harvard would not be allowed to have fans in the stands until a vaccine is developed.

Harvard has already announced that all classes for both semesters will be held virtually; dorms will be open only to freshmen and seniors. Yale said it would limit its dorms to 60% capacity and said most classes would be conducted remotely. Princeton will also do most of its teaching online, with dorms at half capacity.

But while Ivy League football remains a quaint extracurricular activity, the sport drives millions in revenues for Power Five schools. According to USA Today, the Longhorns football program brought Texas more than $144 million in 2018.

Losing football would be a heavy blow for most schools. As Stanford announced it was cutting 11 varsity sports, its athletic director warned that a $25 million deficit forecast for 2021 would likely double if the football season is canceled.

“I can promise you. We are planning to play the season at the University of Alabama,” St. John said. “Understand that creates great difficulties and complexities, and we are hoping for that. It’s important to a lot of people. But we’re doing our best on that one.”

Michigan football coach Jim Harbaugh said on Wednesday he and his team want to play — even if it means moving the season to the spring, or playing in front of more than 100,000 empty seats at Michigan Stadium, known as “The Big House.”

“It (the pandemic) is part of our society and we’re going to have to deal with it,” he said. "These kids have to do the same thing. They’ve got to go to school. They’ve been training their whole lives for the opportunity to play their sport.”