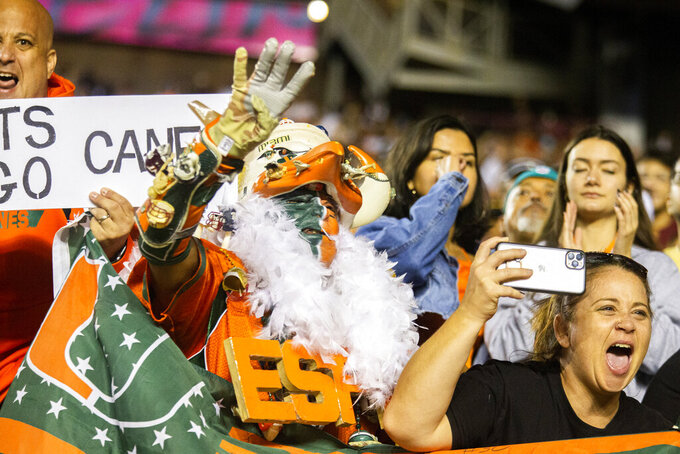 CORAL GABLES, Fla. (AP) — Blake James is no longer Miami's athletic director, with both sides saying it was a mutual decision for him to leave the university Monday in a move that came two days after the Hurricanes’ football team lost at Florida State.

The school said it was beginning a search for his replacement. Deputy AD Jennifer Strawley will serve as the interim AD during the search.

Miami is likely to consider more changes in athletics, and football coach Manny Diaz faces an uncertain future. The move was made about six weeks after school president Julio Frenk released a letter to the university community insisting he would increase his involvement with athletics and saying “we are fully committed to building championship-caliber teams at The U.”

“It has been an honor to lead Miami athletics and to be a part of such a world-class institution,” James said in a statement released by the university. “I am proud of the work that we have done together, though I know there is still more yet to be achieved. ... I wish the Canes nothing but the best and look forward to my next endeavors.”

Football — the biggest part of Miami's athletic brand — has struggled again this season. Miami is 19-15 in Diaz’s three seasons, including 5-5 this year. The Hurricanes wasted an eight-point lead in the final minutes of Saturday's 31-28 loss to Florida State.

Miami has yet to win an Atlantic Coast Conference football title since joining the league in 2004, and hasn't won a national title since 2001.

“Just because we have parity in college football doesn't mean that anybody's satisfied or happy or thinks it's OK that we're .500 in the league and .500 overall," Diaz said Monday, a few hours before James and Frenk met to finalize the decision. “But we do respect that winning isn't as easy as it appears.”

James was part of the decision-making group that hired Diaz in 2018, luring him away from a job at Temple that he’d held for less than a month. Diaz had been Miami’s defensive coordinator under Mark Richt, and when Richt resigned on Dec. 30, 2018, the Hurricanes needed only a few hours before completing a deal with Diaz.

James spent 17 years at Miami and accepted the AD job in February 2013, with the Hurricanes still in the throes of the NCAA investigation into the actions of rogue former booster Nevin Shapiro. The Hurricanes got through scholarship limitations and probation that followed the Shapiro decision, and James helped the school complete a number of facilities projects — a baseball player development center, an indoor practice facility for football, a nutrition center and many more.

He's also well-regarded nationally, serving as a past chair of the NCAA Division I Council.

But football is, again, nowhere near the championship level that Miami craves. And two days after the loss to Florida State, Miami made a major change.

“Paired with The U’s storied history in intercollegiate sports, the enhancements Blake championed — in areas ranging from student-athlete support and academic achievement to community outreach and facility upgrades — give us a solid foundation on which to build," Frenk said.