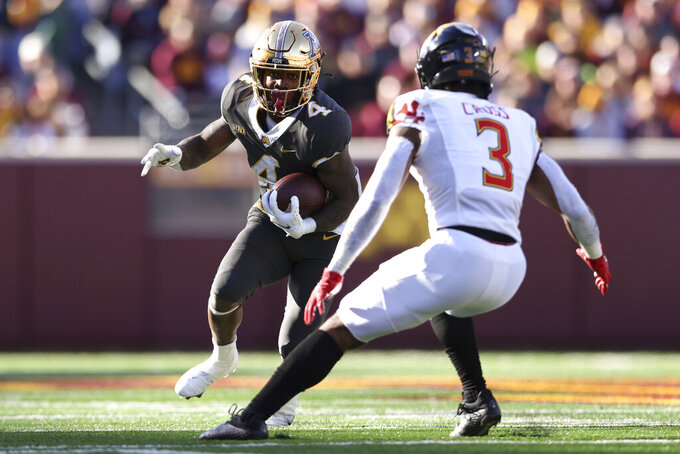 MINNEAPOLIS (AP) — Freshmen Ky Thomas and Mar'Keise Irving became the fourth and fifth different 100-yard rushers for Minnesota this season, as the Gophers gained 326 yards on the ground in a 34-16 trampling of Maryland on Saturday for their third straight victory.

Thomas (21 carries, 139 yards) and Irving (15 carries, 105 yards) each had one of four rushing touchdowns for Minnesota (5-2, 3-1), which moved into a first-place tie with Iowa in the Big Ten West Division. Purdue and Wisconsin are one game back.

“We have a lot of experienced guys up front that take a lot of pride to open a lot of holes and lanes for the talent of the running backs to take over,” Gophers coach P.J. Fleck said. “I thought they did a great job blocking.”

Taulia Tagovailoa lost a fumble on the opening drive and completed 17 of 27 passes for 189 yards and a late touchdown to Marcus Fleming for the Terrapins (4-3, 1-3), who have dropped three straight games by a combined score of 151-49.

“Guys just have to have pride, be more desperate to win than being OK with losing,” wide receiver Rakim Jarrett said.

Thomas, Irving and Bryce Williams, who rushed for 48 yards and a score, are the only healthy scholarship running backs left on the roster for the Gophers, who lost star Mohamed Ibrahim in the opener and backup Trey Potts three weeks ago to season-ending injuries.

Williams took the lead last week in a win over Nebraska, becoming the third player to top the 100-yard rushing mark this year. Thomas and Irving gave the Gophers the first pair of 100-yard rushers in the same game since Rodney Smith and Shannon Brooks on Oct. 5, 2019, against Illinois.

Tanner Morgan went 8 for 12 for 125 yards passing, and backup quarterback Cole Kramer rushed for 30 yards and a touchdown. The Gophers didn't punt until 5:09 remained in the game.

“It’s a credit to the entire unit honestly, being able to go out there and finish the game in that fashion," left guard Conner Olson said. "It was a good way to end the game from an offensive lineman standpoint, and I always prefer running it instead of passing it, no offense to Tanner.”

In three losses to the Terrapins since Fleck arrived in 2017, the Gophers allowed an average of 39 points and 286 rushing yards. They beat the Terrapins handily in 2019 when they had six eventual NFL draft picks on their defense.

There was no lower moment for Minnesota in the virus-altered 2020 season than the 45-44 overtime loss at Maryland, when the Terrapins stacked up 675 total yards.

This year? The Gophers entered the game ranked sixth in the FBS and second in the conference in fewest rushing yards allowed.

The Terrapins literally kicked away a golden opportunity to make a game of it. After a touchdown run for Maryland by Tayon Fleet-Davis cut the lead to 17-10, the Gophers used their final timeout with 32 seconds left in the first half following a first-down run from the 19-yard line.

Morgan had to spike the ball to stop the clock, but Matthew Trickett’s 38-yard field goal attempt was blocked by Tarheeb Still, who booted the ball as he tried to pick it up on the run and dropped it on his second scoop attempt. Ahmad McCollough grabbed it, but he was tackled at the 32.

Fleck said the conservative strategy was based on the Gophers receiving the second-half kickoff.

“It’s not just hoping not to lose,” Fleck said. "That’s actually trying to win the game based on percentages, possessions, points.”

Maryland coach Mike Locksley has lamented all season his team's propensity for penalties, and the sloppiness persisted with eight flags for 79 yards, and many of them were especially costly. The Terrapins even got an illegal substitution penalty during a punt, whistled for having two players wearing No. 99 on the same play.

“It just starts with the accountability," Locksley said. “At some point, pride becomes a big part of it.”

“The next man just has to step up. If they're going to roll the coverage to me, I think maybe I just have to make the play,” Jarrett said.

Minnesota: The Gophers have recovered well from their baffling loss here four weeks ago that now stands as Bowling Green's only win over an FBS opponent in 15 tries since Nov. 2, 2019. This team has its limits, but the strength of this offensive line can go a long way toward keeping the Gophers in play for their first Big Ten championship game berth. The eventual winner of the underwhelming West Division could easily wind up with two or three conference losses.

Minnesota: Plays at Northwestern next Saturday.