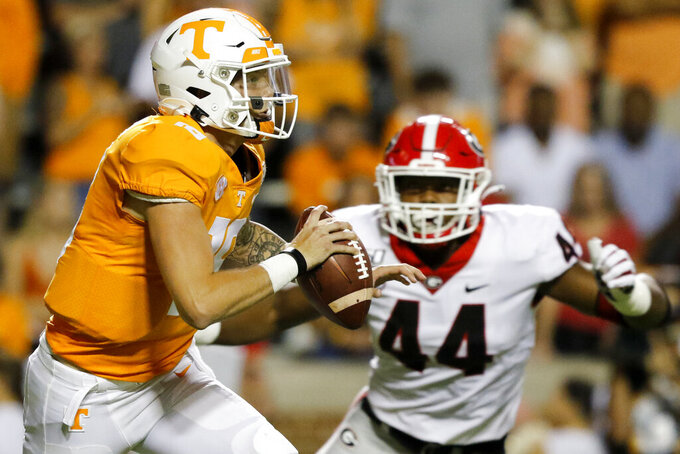 Tennessee quarterback Brian Maurer will make his second career start Saturday after delivering mixed results last week in a 43-14 loss to No. 3 Georgia. Mississippi State coach Joe Moorhead isn't saying whether he will start Penn State graduate transfer Tommy Stevens or freshman Garrett Shrader, who both have played quite a bit this season.

Maurer threw for 209 yards and two touchdowns in the first half against Georgia before tailing off in the second half. He finished the game 14 of 28 for 259 yards and also had an interception and a fumble.

"There's way more positives than there were negatives," Tennessee coach Jeremy Pruitt said of Maurer's performance. "He's got to learn from them and not make the same mistakes again. But he did step in there and make some nice throws, and I thought our kids rallied around him pretty well."

Both Tennessee and Mississippi State could use a spark as they attempt to bounce back from lopsided losses. Mississippi State (3-2, 2-1 SEC) had last week off after losing 56-23 to No. 12 Auburn, which was ranked seventh at the time.

"You can either dwell on it and allow the same game to try and beat you twice, or you can correct it, put it to bed and move on," Mississippi State coach Joe Moorhead said. "We chose the latter."

While Mississippi State wants to put the Auburn game in the past, Tennessee is hoping its loss to Georgia represents a turning point. Although Tennessee ended up getting blown out, the Vols played well in the first half and led for most of the second quarter.

"I feel like we came out of our shell more," Tennessee safety Nigel Warrior said. "I think more of the players, my teammates, we opened up a little bit. We played with more heart. That brought out more personality. If you looked on the sideline, you could see people jumping around. On the field, you could see more personality, screaming, talking to each other, communication."

Here are some other things to know about Saturday's Mississippi State-Tennessee game.

Moorhead isn't saying which of his quarterback will start Saturday's game, which means Tennessee has to prepare for both of them.

Shrader is the more mobile of the two quarterbacks. He's run for 312 yards and also has completed 58.8 percent of his passes for 511 yards with two touchdowns and an interception.

Stevens has completed 63.8 percent of his throws for 448 yards with five touchdowns and two interceptions.

HILL ON THE RUN

Mississippi State has the SEC's leading rusher in Kylin Hill, who has run for 596 yards and five touchdowns while averaging 5.5 yards per carry. Hill has gained 344 yards after contact, also the most in the SEC.

Mississippi State will have to watch out for Tennessee senior receivers Marquez Callaway and Jauan Jennings, who each caught a touchdown pass and accumulated over 100 yards receiving against Georgia. Jennings has five touchdown catches this season.