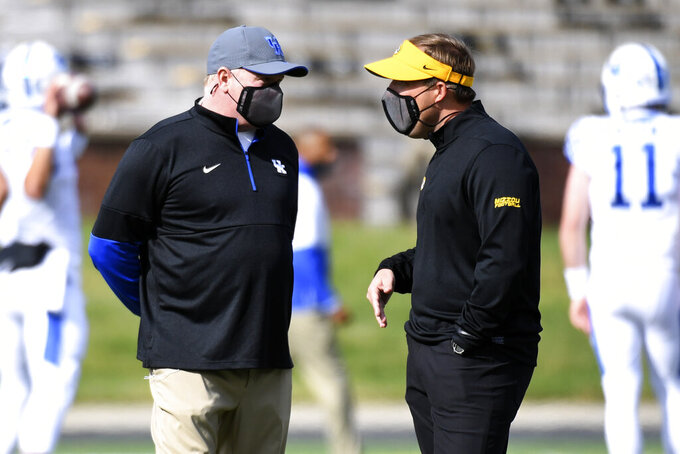 COLUMBIA, S.C. (AP) — Missouri coach Eli Drinkwitz has some good memories of playing at South Carolina. He hopes to make a few more this week.

It was a year ago that Drinkwitz, then the coach at Appalachian State, brought the highly overmatched Mountaineers into Williams-Brice Stadium in what was expected to be a Power Five blowout by the Gamecocks.

Instead, Drinkwitz's team came up with a defensive effort that held down South Carolina in a 20-15 upset.

“Everybody loves an underdog story, that was one of those where it was you against everybody and you found a way to get it done.” Drinkwitz said this week. “So it was a lot of fun and something I'll always remember.”

It was also a win that likely played a role in Drinkwitz's hiring by the Tigers after last season — and the dismissal of South Carolina coach Will Muschamp this past Sunday.

The Gamecocks had lost 11 of their last 14 since the middle of last season, including the App State defeat.

Drinkwitz understands the Tigers will face a hurt, angry team in South Carolina, eager to show it's better than its recent three-game losing streak — during which the Gamecocks have been outscored 159-79.

Drinkwitz regretted that Muschamp was fired, but knows it will give South Carolina players extra motivation in this one when few believe the Gamecocks can succeed.

“It's a circle-the-wagons game for them,” Drinkwitz said.

Missouri has its own challenges. The Tigers haven't played in three weeks, their game with No. 13 Georgia postponed due to COVID-19.

And Drinkwitz said the South Carolina game was still on despite him having only 56 scholarship players available this week due to positive coronavirus tests and ongoing contact tracing.

Interim South Carolina coach Mike Bobo said his team has practiced haphazardly as it deals with the fallout from Muschamp's firing. Bobo, the former Colorado State coach and Georgia assistant, hopes his players find the ability to compete in the face of adversity.

Some other things to watch when Missouri plays at South Carolina:

Missouri has played just twice since Oct. 10 due to a several postponements and rescheduled contests amid the ongoing pandemic. Drinkwitz isn't sure what to expect when his team hits the field. “You always worry about tackling and turnovers in this situation,” he said. “But we'll see how it goes.”

South Carolina will be without its two starting cornerbacks in Jaycee Horn and Israel Mukuamu, both who opted out of the rest of the season after Muschamp's firing. The two shared the Gamecocks' lead with two interceptions each. The pair of expected to be taken in next spring's NFL draft.

The contest is for the Mayor's Cup, annually awarded between the SEC's two teams from cities named Columbia. South Carolina holds a 5-2 lead in the series since the Tigers entered the league's Eastern Division and became a yearly rival for the Gamecocks.

SHAW OFF THE SIDELINES

South Carolina's coaching change meant interim leader Bobo could add a 10th on-field coach and he brought in former Gamecocks quarterback Connor Shaw, who was the team's director of player development. When Shaw last did that at Missouri in 2013, he rallied the Gamecocks from 17-0 down to win 27-24 in double overtime, in a game dubbed, “The Miracle at Mizzou.”

Missouri has shown it can win in differing ways this season. Against defending national champion LSU, Missouri won in a shootout, 45-41, on Oct. 10. In defeating Kentucky 20-10 a week later, the Tigers relied on smashmouth football and strong defense for the victory. Missouri quarterback Connor Bazelak threw for 406 yards and four touchdowns against LSU. He passed for just 201 yards against Kentucky as the Tigers controlled the clock to win.