No. 19 Hokies look to avoid upset against Middle Tennessee 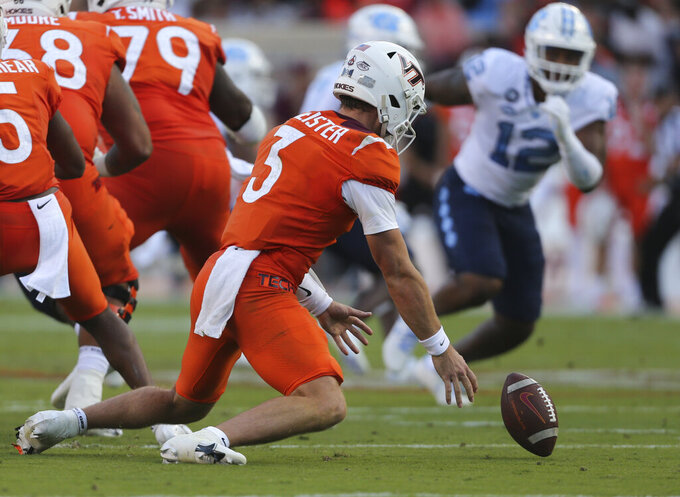 Virginia Tech had six months to prepare for its season opener. Now the No. 19 Hokies have six days to get ready to face Middle Tennessee.

“Our challenge is to turn the page and move forward,” coach Justin Fuente said.

The Hokies would like to carry the momentum of their 17-10 victory against North Carolina with them.

In a scheduling oddity, Virginia Tech plays six of its first seven games at home, which the Hokies want to use to their advantage. Lane Stadium was as loud as ever against the Tar Heels as fans celebrated the ability to fill the stadium after a year away because of the pandemic.

“It’s just a really special atmosphere, as good and as energetic a place as a sporting event as I’ve ever been in from start to finish,” Fuente said. “Played a huge role in the game.”

It figures to be the same on Saturday, when fans are encouraged to wear white.

“We’ve got a long bus ride, so we’ve got to be able to handle that, and then being ready for a loud stadium,” Blue Raiders coach Rick Stockstill said. The school in Murfreesboro is more than 400 miles away, and this week’s game is the first of three in a row on the road.

“They were extremely loud last week against North Carolina, and we expect the same thing this week. It’s going to be a whiteout game for them, so it’s going to add to the excitement of the fan base there, so we've got to do a good job communicating.”

Middle Tennessee, of Conference USA, opened its season with a 50-15 victory over Monmouth.

Virginia Tech started well against the Tar Heels, scoring touchdowns on two of its first three drives, then stagnated, but the film showed enough for the Blue Raiders to see that Hokies quarterback Braxton Burmeister is dangerous throwing and running.

“We realize if he doesn’t have his first or second check-down, he’s going to take off,” senior safety Reed Blankenship said. “You’ve just got to do your job and keep him contained, and I think our front seven can do that.”

Some things to watch when Middle Tennessee plays at Virginia Tech:

The Hokies had six sacks against the Tar Heels due in large part to solid play in the secondary that left Sam Howell holding onto the ball looking for an open receiver. Middle Tennessee had three sacks against Monmouth.

A huge factor in the Hokies' victory over the Tar Heels was their three interceptions, the last to kill North Carolina's final drive with 37 seconds left. The Blue Raiders forced four turnovers — three fumble recoveries — and converted all four into touchdowns in their victory over Monmouth.

The Hokies' next four games are against nonconference opponents and they will have to guard against looking past the Blue Raiders to their game the following week at longtime rival West Virginia.

Burmeister threw for 169 yards and ran nine times for 42 yards in the opener, and limiting the hits he takes is important for the Hokies, who have minimal experience at quarterback behind him.