No. 6 Clemson looks to address 'details' against SC State 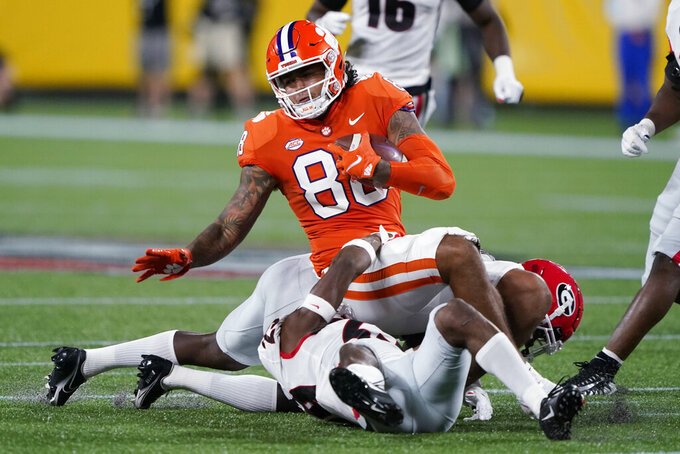 Clemson tight end Braden Galloway is brought down by Georgie defenders during the second half of an NCAA college football game Saturday, Sept. 4, 2021, in Charlotte, N.C. (AP Photo/Chris Carlson)

The rebound starts Saturday when the Tigers (0-1) open their home season against South Carolina State (0-1), an instate, FCS program.

Swinney said the Tigers played with toughness throughout their 10-3 loss to No. 2 Georgia last week. He said the mistakes they made were with technique.

“We have to improve on details and precision,” Swinney said. “Football punishes you for mistakes and rewards details.”

Count on the Tigers to pay attention to the details this week.

“From what I saw, this team has what it takes,” Swinney said of his group. “That’s exciting to me as we move forward.”

D.J. Uiagalelei, Clemson's first-year starter at quarterback, will look to improve his game as well after struggling. Georgia sacked him seven times.

Even though the Tigers' tailbacks and and offensive line didn't help, Uiagalelei took the blame for the offensive struggles. He's also confident he and the offense will correct their mistakes and crank things up.

“We have 11 weeks left in the regular season and whatever we have beyond that,” Uiagalelei said. “We'll be ready to go.”

South Carolina State coach Buddy Pough said his team has its work cut out for it this week, given Clemson's opening result.

“We got a chance to get a Tiger by the tail,” Pough joked. “What happens if you catch a Tiger, especially one that's been riled up by another Bulldog the week before.”

South Carolina State dropped a 42-41 game to Alabama A&M, where it gave up 569 yards of offense.

Expect Clemson to pile on this week.

Some other things to watch when South Carolina State plays at Clemson:

Clemson is set to welcome a full house at 81,500-seat Memorial Stadium for the first time since 2019. The school plans for full tailgating as it had two years ago. The school won't have all its usual traditions, though, telling fans its game-ending “Gathering at the Paw” where fans go on the field will be suspended for at least the first two home games.

The Tigers may have a harder time finding a replacement for ACC career rushing leader Travis Etienne than for 2020 league player of the year quarterback Trevor Lawrence. Clemson finished with just 2 yards rushing last week. Senior Lyn-J Dixon was the leading rusher with 10 yards. Sophomore Kobe Pace and freshman Will Shipley got the most carries with four each.

Clemson has won all 35 of its previous games against Football Championship Subdivision programs since the NCAA created the group in 1978. Four of those victories have come over South Carolina State, including a 59-0 win in 2016 the last time the teams played.

The Tigers had questions about their defense coming into the season after losing to Ohio State in the national semifinals last year. But Clemson looked as stout as ever in holding Georgia to 10 points and 121 yards rushing.

“It was fun,” Tigers linebacker Jamie Skalski said. “We had a good time getting back on the field.”

South Carolina State will receive $500,000 from Clemson for the game Saturday. The money is a necessary boost to the FCS program and will help fund the entire athletic program going forward. Such guarantee games are commonplace in college football, despite what is often a mismatch.