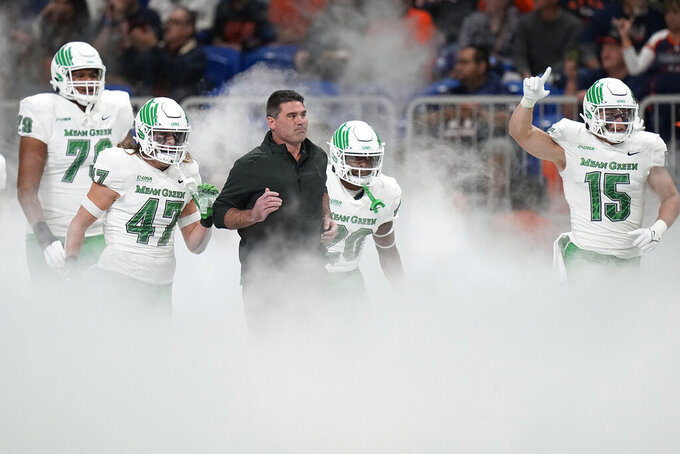 North Texas coach Seth Littrell runs onto the field with the team for an NCAA college football game against UTSA for the Conference USA championship in San Antonio, Friday, Dec. 2, 2022. (AP Photo/Eric Gay)

University president Neal Smatresk said Sunday night that the decision to make the move came after a thorough assessment of the program.

The Mean Green are 7-6 this season after losing 48-27 to UTSA in the Conference USA championship game Friday night.

The 44-year-old Littrell had one year left on his contract in what was his first head coaching job. He was the youngest coach in Conference USA and one of the youngest at the FBS level when he arrived after two seasons as offensive coordinator at North Carolina with UNT coming off a 1-11 season at the time.

While the Mean Green are going to their sixth bowl since Littrell first got there, they haven’t won any of those yet. The bowl in his debut season came after only five wins since there weren’t enough bowl-eligible teams to fill all of the slots. Consecutive nine-win seasons followed in 2017 and 2018, but they then had three consecutive losing records before this year.

Smatresk said Jared Mosley, the chief operating officer of UNT athletics, will serve as interim AD. The university is working with a search firm to find Baker's successor.