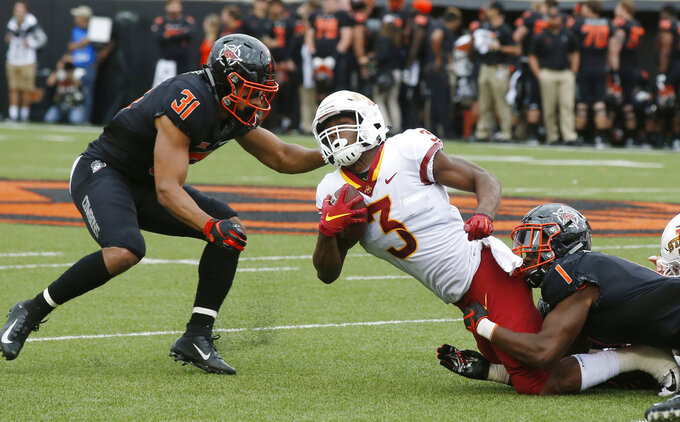 While Oklahoma State (4-2, 1-2 Big 12 Conference) has demonstrated an impressive pass rush that leads the nation in sacks with 28 and ranks third in tackles for loss with 55, it appears the weak spot of their defense lies with the young secondary group that is surrendering an alarming number of passing plays.

The Cowboys have started two true freshmen, Kolby Peel and Jarrick Bernard, at safety in the last two games, with sophomores Malcolm Rodriguez and Thabo Mwaniki, who each started the first four contests, also seeing plenty of action in the rotation. Mwaniki is the only one of the four who had seen the field on defense before this season, starting two games last year, and the group is experiencing growing pains.

"We've got to a better job defending the deep ball, we can't give up big plays," Oklahoma State coach Mike Gundy said. "We're young in the safety position and it's a difficult position to be young at. Those guys have to be really, really disciplined. Thabo didn't get a lot of work last year, and then you have two true freshmen and everybody knows it, it's not a secret. They have to be really disciplined and structured in their eyes, and they get caught looking around at times. It doesn't surprise me, but I wish we had answers for it."

Oklahoma State has allowed 1,349 yards passing over the last four games. That's an average of 337.3 per game, which would rank 128th out of 130 FBS schools if that was their full-season average. As it is, their overall mark of 241.3 ranks 91st.

Iowa State freshman quarterback Brock Purdy, in his first significant college appearance, thrived against the then-No. 25 Cowboys, completing 18 of 23 passes for 318 yards and four touchdowns. Two weeks earlier, another true freshman QB, Alan Bowman of Texas Tech, sliced up the Oklahoma State defense for 397 yards and two touchdowns on 35 of 46 passes in a 41-17 victory.

Gundy believes his young defenders are falling victim to eye fakes, and it is costing them.

"Our safeties have got to do a better job of not letting their eyes get in the backfield," Gundy said. "We continue to work that and we talk to them. I know they're young. (Bernard, Peel and Mwaniki), basically, are guys that hadn't played a lot and we've got to continue to improve. Our guys are getting violated with their eyes, they're getting caught looking in the backfield and they're getting run by. We have to do as much as we can, whether it's not be so multiple on defense, like tighten it down, and then just continue to work it on Tuesday and Wednesday."

Gundy said the issue is a byproduct of the type of offenses that most Big 12 schools utilize, which makes it difficult to discern what type of play is coming. Effectively combating that requires concentration by the defenders to figure it out before it happens.

"It is the most difficult part of these styles of defenses versus spread offenses," Gundy said. "That's why everybody in this league does what they do, because they get guys violated with their eyes. That's why you see (all the misdirection and run pass option plays), you're just violating eyes and guys that have a run responsibility and a pass responsibility, have to be extremely locked in on what you're supposed to. And with us right now, we've got young guys that are getting their eyes in the wrong spot."

Oklahoma State's next test will come Saturday on the road at Kansas State (2-4, 0-3), which is coming off a 37-34 loss at Baylor. Gundy believes his team's positive attitude will help it bounce back.

"We just got to keep rolling, keep working," he said. "I think the most important thing for us is to try to correct some of the mistakes we have before we even get into Kansas State. We worked on some of that (Sunday) night. Guys were in a good frame of mind, we had a good practice."