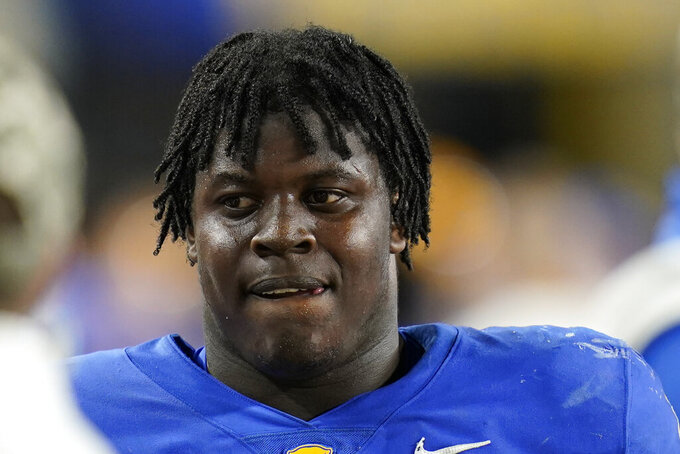 Pittsburgh defensive lineman Calijah Kancey stands on the sideline during an NCAA college football game against North Carolina, Nov. 11, 2021, in Pittsburgh. Kancey, a finalist for the Bronko Nagurski Award given to the top defensive player in the country, is the latest in a long line of Pitt defensive linemen who have carved a path to the NFL, a list that includes Los Angeles Rams star Aaron Donald. (AP Photo/Keith Srakocic, file)

PITTSBURGH (AP) — Pittsburgh defensive tackle Calijah Kancey, the ACC's Defensive Player of the Year, will miss the team's bowl game due to injury.

Kancey, a junior, made the announcement in an Instagram post on Friday. Kancey sustained an injury in the second half of a win over Duke on Nov. 19 and did not travel with the team for a victory at Miami on Nov. 26.

“Thanks to the best trainers in the country at Pitt,” Kancey said. “I know they will help me get back to 100% soon.”

Kancey collected 7 1/2 sacks and 14 1/2 tackles for a loss in 11 games this season for the Panthers (8-4). He is the first Pitt player to win the conference's highest defensive honor since Aaron Donald in 2013.

The 6-foot-1, 280-pound player has been coy about his intentions next year, though the Miami native likely has worked himself up NFL draft boards over the last three months.

Kancey did say he plans to help teammates prepare for whatever bowl they might be headed to.

Pitt did not defend the ACC title it won a year ago but finished strong, winning four straight to end the season to come in second to North Carolina in the ACC's Coastal Division.