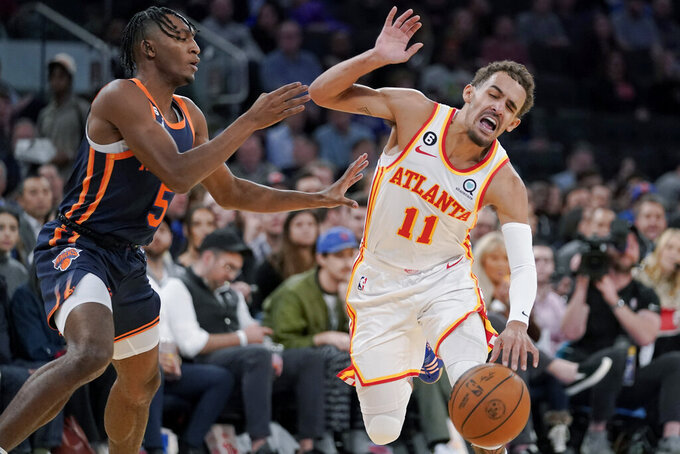 NEW YORK (AP) — Though Trae Young's sneakers proclaimed him the “King of Broadway," Julius Randle was the one who ruled things inside Madison Square Garden.

Randle had 34 points and 17 rebounds and the New York Knicks capitalized on another key Atlanta Hawks injury to coast to a 113-89 victory Wednesday night.

Randle made six 3-pointers and added five assists against an injury-depleted and overmatched Atlanta frontcourt.

“It was a monster game. I love the way he played,” Knicks coach Tom Thibodeau said.

“When he plays like that, we’re going to be tough to beat.”

Young showed up wearing sneakers in the Knicks' blue-and-orange colors with “King of Broadway” on them, but he was left largely having to win this one alone after the Hawks lost a third starter when Dejounte Murray sprained his left ankle after 3 1/2 minutes.

Already without starting forwards John Collins and De'Andre Hunter, the Hawks trailed by as many as 28 points in their fifth loss in seven games.

“Obviously we were trying to figure out a rhythm with Dejounte, and with guys being in and out right now it’s tough,” Young said. “But we’ve just got to fight through this time and whenever we get everybody back we’ll be really good.”

Young finished with 19 points and six assists. The customary boos he’s heard at Madison Square Garden since the teams met in the first round of the 2021 playoffs rained down early, but there wasn’t much reason for the fans to keep it up in a game that wasn’t competitive in the second half.

Quentin Grimes added 23 points for the Knicks, who won their second straight at home after dropping their previous five at Madison Square Garden.

Bogdan Bogdanovic, in just his third game of the season after returning from injury, missed all 10 3-pointers and shot 3 for 16 overall. The Hawks were 6 for 36 behind the arc.

The Knicks led by 14 in the final minute of the first quarter and appeared coasting toward a blowout at 38-20 early in the second. But the Hawks responded with the next 17 points to cut it to one on Young's layup, before New York regained control with a 15-4 finish to lead 53-41 at the half.

The Knicks then scored 36 points in the third to put it away.

Hawks: Murray had torched the Knicks for 36 points, nine assists and five steals in Atlanta's victory here last month, jump-starting their comeback from a 23-point deficit with 18 points in the second quarter. ... Clint Capela had 13 points and 11 rebounds.

Knicks: Derrick Rose and Cam Reddish both sat out for the second straight game, having at least for now fallen out of the rotation as Thibodeau aims for a nine-man rotation. He said it wasn't hard having to bench Rose, who played for him in Chicago and Minnesota, because he knew the veteran point guard would be helping the team no matter his role.

Hawks coach Nate McMillan thought Reddish had the combination of size and skills to be a good fit for Thibodeau in New York after the Knicks acquired the No. 10 pick in the 2019 draft from Atlanta last Jan. 13. But the swingman has rarely had more than a brief stretch where he made an impact.

Hawks: At Brooklyn on Friday night.

Knicks: At Charlotte on Friday night.