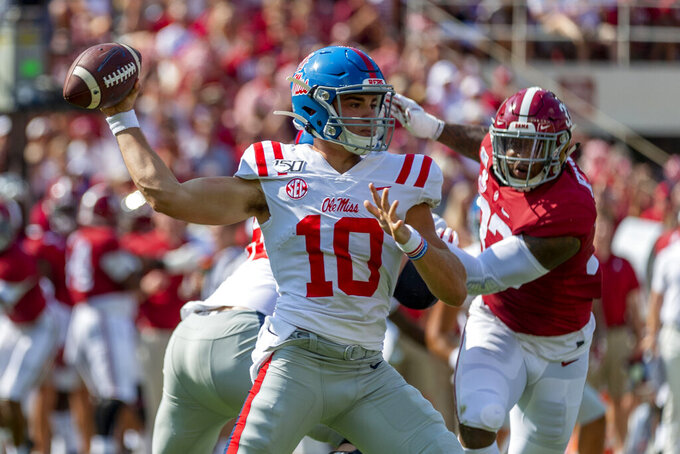 Mississippi quarterback John Rhys Plumlee (10) throws against Alabama during the first half of an NCAA college football game, Saturday, Sept. 28, 2019, in Tuscaloosa, Ala. (AP Photo/Vasha Hunt) 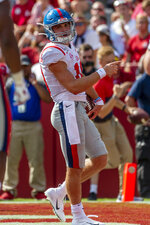 "I think Plumlee did enough (against Alabama) that you will see him regardless of what happens," Luke said Monday. "But you have to see Matt go out and do it before you make a decision."

Corral started each of Ole Miss' first four games before missing a 59-31 loss to Alabama last week due to bruised ribs. Plumlee made his first career start against the Crimson Tide.

Plumlee went 10 of 28 for 141 yards with two touchdowns and an interception against Alabama, which rose from No. 2 to No. 1 in the Top 25 after the game. Plumlee also rushed for 109 yards on 25 carries.

"I was probably the most impressed by talking to him when he came off the field to the sideline," offensive coordinator Rich Rodriguez said. "What he was seeing, his eyes were in the right spot. He knew what was going on. For the first time starting, I thought he was pretty good."

Plumlee flashed the quickness that makes him an enticing option in Rodriguez's scheme, one that likes to utilize the quarterback as a focal point in the running. Even though Plumlee completed less than half his pass attempts, Luke believes the freshman did more than enough in the loss to be in consideration for the permanent starting job.

The quickness Plumlee flashed against the Crimson Tide defense is primarily what will grant him the opportunity to stay on the field.

Managing two quarterbacks is nothing new for Rodriguez, who said he played two at some point in each of his previous coaching stops.

"I have never really managed the quarterbacks any differently," Rodriguez said. "I have always given all the guys a lot of reps. ... Just about everywhere I have gone, I have used two quarterbacks at some point. It would be a challenge if the first-team guy took six or seven reps and the second guy takes two or three. The way we practice, they take equal."

And then there is Grant Tisdale, a freshman out of Allen, Texas.

Tisdale led a scoring drive against Alabama and went 2-of-2 with a touchdown pass to freshman wide receiver Jadon Jackson. How Tisdale fits into this competition remains unclear.

It is clear that Corral is a more polished passer, but Plumlee is a more natural fit in the running portion of Rodriguez's scheme. Both will play against Vanderbilt.

"Plumlee obviously has some dynamic running skills so we ran him more than we did with Matt previously," Rodriguez said. "I have to manage all three quarterbacks, see who is healthy and look at how Vanderbilt is going to play us. Beyond that, see you Saturday."

20 minutes ago
By Kristie Rieken 8 hrs ago
11 hrs ago
By Ralph D. Russo 18 hrs ago
By The Associated Press 20 hrs ago