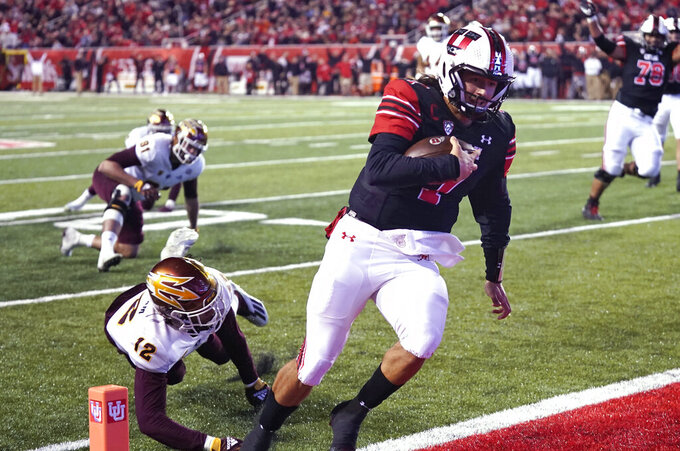 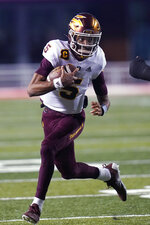 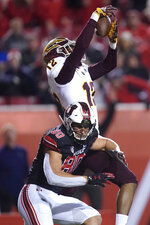 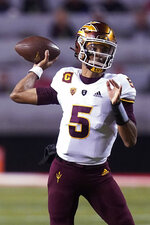 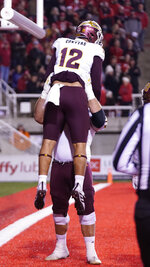 The Utes are gaining momentum in pursuit of a third division title in four years after taking down a third straight league opponent.

Cameron Rising threw for 247 yards and two touchdowns as Utah rallied to beat No. 18 Arizona State 35-21 on Saturday night.

Rising added 59 yards and a touchdown on six carries. Tavion Thomas ran for 84 yards and a score. The Utes (4-2, 3-0 Pac-12) took over sole possession of first place in the Pac-12 South, and are the last unbeaten team in Pac-12 play.

“We got everything we want right there in front of us,” Rising said. “We just got to go take it.”

Utah scored on four straight drives in the second half to erase a 14-point halftime deficit. Rising completed 13-of-15 pass attempts after halftime while leading the comeback.

“Got a lot of faith in Cam Rising,” Utes coach Kyle Whittingham said. “He’s a great leader for us and the players believe in him.”

The Utes pulled within a touchdown on a 7-yard run by Thomas. Then Rising tossed touchdown passes to Brant Kuithe on back-to-back drives to give Utah its first lead in the fourth quarter. A 20-yard strike to Kuithe tied the game midway through the third quarter. Then, a wide-open Kuithe walked a 7-yard pass into the end zone untouched, putting the Utes up 28-21.

“They continued to make first downs, they went on substantial drives, and we couldn’t get off the field and it kills you,” Sun Devils coach Herm Edwards said. “Defensively, it puts you in a bad way.”

Arizona State totaled 97 yards in the second half and averaged 3.3 yards per play. The Utes were energized on defense by what they were able to do on offense.

“We just want to keep the juice and the momentum in our favor,” linebacker Devin Lloyd said. “Seeing those guys go down there and do what they do, it just gets us pumped up.”

The Sun Devils struck first on their opening drive, going up 7-0 on a 7-yard pass from Daniels to Jalin Conyers that capped a 12-play drive. Conyers walked into the end zone after being left wide open on the goal line.

Utah answered on its first drive, tying the score at 7-all on a 9-yard run by Rising. Rising converted a pair of third downs to keep the drive alive, running 12 yards on a keeper and connecting with Britain Covey on a 10-yard pass.

Daniels put Arizona State back up by two touchdowns in the second quarter.

The Sun Devils reclaimed the lead on Daniels’ 2-yard bootleg. LV Bunkley-Shelton set up the score a play earlier when he broke a tackle on a short pass and rumbled 59 yards before finally being brought down. Then Daniels tossed a 15-yard pass to Curtis Hodges to extend Arizona State’s lead to 21-7 with 52 seconds left in the half.

“In the first half we were hot, but we couldn’t get nothing going in the second half on either side of the ball,” Daniels said.

Utah drove deep into Sun Devil territory twice in the second quarter. Both possessions ended in interceptions thrown by Rising.

Arizona State: Starting with their opening drive, the Sun Devils put together one explosive play after another to keep Utah’s defense on its heels during the first half. The tables turned in the second half when Arizona State sputtered on defense and offense.

Utah: The Utes put themselves in a hole early with a pair of turnovers. Utah came to life on offense after halftime, running off four straight scoring drives while averaging 7.5 yards per play on those drives.

Covey was whistled for a penalty on Utah’s second scoring drive late in the third quarter. He caught a 6-yard pass on third down to get the Utes down to the Sun Devil 5. Two defenders rode the receiver out of bounds and Covey immediately jumped up and flexed his muscles at them – earning a 15-yard penalty for taunting.

It didn’t slow Utah. The Utes tied the game on the next play with Kuithe’s first touchdown catch and they took the penalty in stride.

“I didn’t notice (him flexing) and he apologized to the team afterward,” Whittingham said. “That kid made play after play as well. I love Britain Covey and his competitive spirit.”

Arizona State became the first team to score points on Utah on its opening drive against the Utes this season. It ended up being the longest scoring drive of the night for the Sun Devils. They drove 75 yards in 12 plays while working 5:10 off the clock.

Arizona State will likely drop from the AP Top 25 after suffering its first Pac-12 loss of the season.