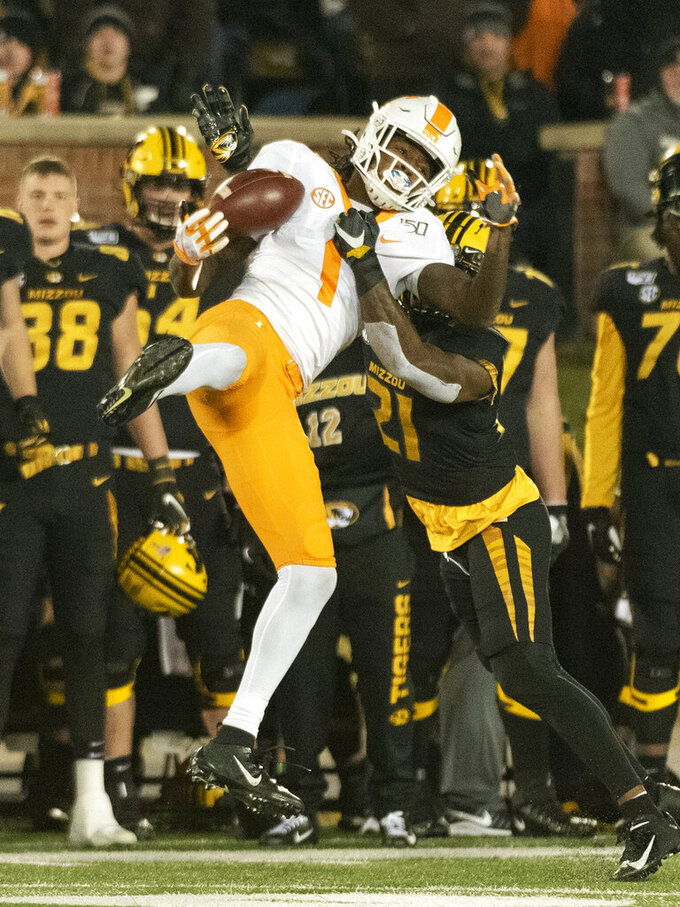 Tennessee wide receiver Marquez Callaway, left, is hit by Missouri defensive back Christian Holmes, right, as he tries to catch a pass during the third quarter of an NCAA college football game Saturday, Nov. 23, 2019, in Columbia, Mo. Holmes was flagged for pass interference on the play. (AP Photo/L.G. Patterson) 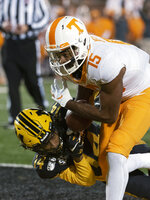 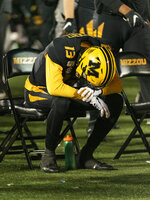 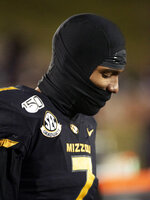 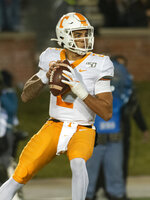 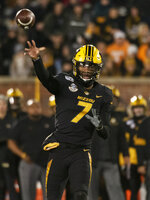 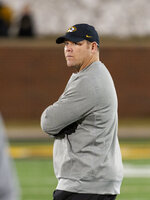 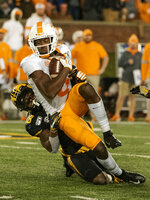 COLUMBIA, Mo. (AP) — Tennessee quarterback Jarrett Guarantano has endured insults and injury during a topsy-turvy junior season. He persevered, and on Saturday night he threw for 415 yards and two touchdowns to lead the Volunteers to a 24-20 victory over Missouri.

After coming off the bench the previous six games, Guarantano started the game and completed 23 of 40 passes.

“When you play against these guys, the different looks they give you, you’re going to have to check at the line of scrimmage, and he absolutely gives us the best chance to do that,” Tennessee coach Jeremy Pruitt said. “And, hey, we’ve got confidence in him. He’s got everything you need to be a good quarterback, and tonight was far and away his best game.”

Missouri’s Kelly Bryant completed 16 of 28 passes for 166 yards and a touchdown. Running back Tyler Badie had two touchdown catches, including one from wide receiver Micah Wilson on a trick play.

“They battled, they competed, they fought, and we came up short,” Missouri coach Barry Odom said. “And I hate it that it resulted in a loss.”

The Tigers cut Tennessee’s lead to 24-20 with Tucker McCann’s second field goal with 4:02 left. But the Volunteers defense, led by Daniel Bituli’s 12 tackles and a sack, stopped Missouri on its final drive.

Tennessee: After starting the season with home losses to Georgia State and BYU, the Volunteers clinched bowl eligibility for the first time since 2016. Tennessee’s only losses since those two early defeats came against current Top 10 teams Florida, Georgia and Alabama.

Missouri: The Tigers were 5-1 and ranked 22nd entering their Oct. 19 game at Vanderbilt. A loss to the Commodores began a slide that has led to questions about coach Barry Odom’s job security. Odom is 24-25 in four seasons at his alma mater. He has a chance to even his record and secure bowl eligibility against struggling Arkansas.

Missouri linebacker Nick Bolton briefly knocked Jennings out of the game in the second quarter with a hit near the goal line when Jennings was running the ball as a wildcat quarterback. .... Bolton hit Callaway in the midsection in the second quarter, and Callaway remained on the turf for several minutes before returning a few plays later. ... Missouri safety Tyree Gillespie drilled Palmer in the fourth quarter on a pass over the middle.

Guarantano had started the first four games of the season, but he and the team struggled. He broke a bone in his left hand midway through the season, had surgery and played with a brace. He played well off the bench to help the Volunteers rebound from a 1-4 start.

Pruitt about the Volunteers becoming bowl eligible: “I’m excited for our players, especially our seniors. When we came in after the Florida game, we’re sitting 1-4, and we said, ‘We’re going to make a bowl. How are we going to do it?’ We had one of those meetings. And those guys backed up what they said they were going to do.”

Missouri was hit in January with an NCAA postseason ban for academic violations committed before Odom took over as coach, but the school is appealing the ban and the NCAA has yet to rule on the appeal.

Tennessee: The Volunteers return home for their regular-season finale Saturday against Vanderbilt.

Missouri: The Tigers finish the regular season against Arkansas on Friday in Little Rock, Arkansas.