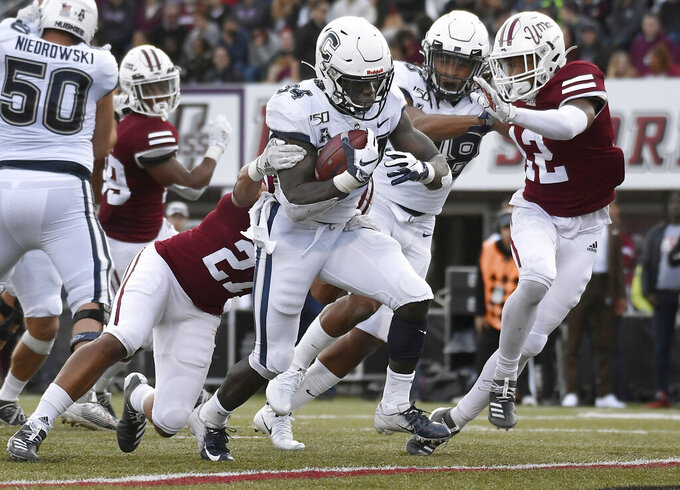 Connecticut running back Kevin Mensah (34) runs in for a touchdown as Massachusetts cornerback Elijah Johnson (27) tries to pull him down during the first half of an NCAA college football game, Saturday, Oct. 26,, 2019, in Amherst, Mass. (AP Photo/Jessica Hill)

AMHERST, Mass. (AP) — Kevin Mensah ran for 164 yards and a career-high five touchdowns and Connecticut breezed to a 56-35 victory over Massachusetts on Saturday.

Mensah sandwiched scoring runs of 17 and 2 yards around a 1-yard TD plunge by UMass' Bilal Ally to give the Huskies (2-6) a 14-7 lead after one quarter.

The Minutemen (1-7) pulled even 7 seconds into the second quarter on Andrew Brito's 40-yard scoring strike to Jermaine Johnson Jr., but UConn scored three touchdowns over a 7:26 span — Art Thompkins' 25-yard run, Mensah's 5-yard run and Jack Zergiotis' 57-yard scoring strike to Cameron Ross — to go up 35-14 with 5:41 left. Brito hit Samuel Emilus for a 14-yard score with 64 seconds remaining to pull within 35-21 at halftime.

Ally's second TD from a yard out got the Minutemen within 35-28 early in the third quarter, but Quayvon Skanes hit Jay Rose for a 15-yard TD on his only pass of the game to push the UConn lead to 42-28 heading into the final quarter. It was Rose's first career TD catch.

Mensah put the game out of reach with TD runs of 14 and 3 yards. The last UConn player to rush for five TDs in a game was Wilbur Gilliard against James Madison in 1993.

Gilberto Torres capped the scoring with a 19-yard TD run with 52 seconds left in the game.

Thompkins finished with 135 yards rushing on 13 carries as the Huskies piled up 326 yards on the ground. Zergiotis completed 18 of 27 passes for 198 yards with one interception. Freshman Cameron Ross had nine catches for a career-high 120 yards. He was the first Huskies receiver to top the 100-yard mark this season.

Ally finished with 159 yards rushing and Brito completed 20 of 40 passes for 239 yards with an interception for UMass.