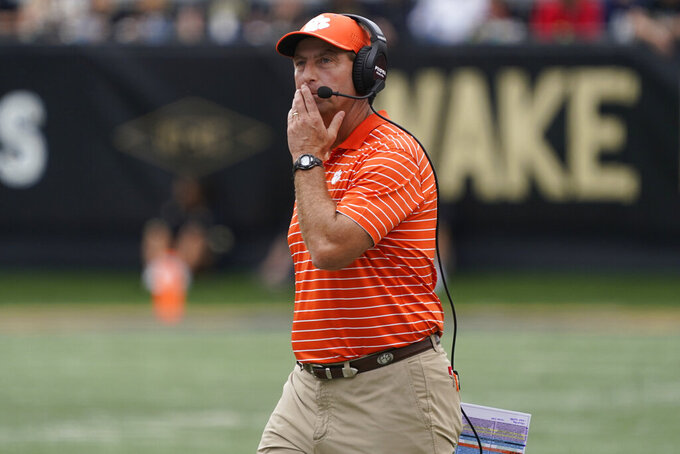 WINSTON-SALEM, N.C. (AP) — A year of criticism didn't shake DJ Uiagalelei's belief that he could lead an offense capable of putting up big numbers for Clemson.

He and his teammates proved that in a shootout road win against a ranked opponent. It's a good thing, too, considering the No. 5 Tigers' margin for error in an Atlantic Coast Conference it dominated for six years looks slimmer than usual.

The Tigers (4-0, 1-0 ACC) stayed in the same spot in Sunday's new AP Top 25 poll after the wild win. Clemson compiled 559 total yards and converted 16 of 23 third downs (69.6%), with those 16 conversions breaking a program record that had stood since 1983. Uiagalelei threw for 371 yards and a career-high five passing scores to go with 52 yards rushing.

They needed every bit of that production to help the defense, which was picked apart much of Saturday by veteran quarterback Sam Hartman — who set a Wake Forest record with six TD passes — and an equally efficient Demon Deacons offense.

It was a reversal from last year, when the Tigers' latest 10-win season was due mainly to the defense, as Uiagalelei and the offense struggled.

“That's the offense we know we have,” defensive end K.J. Henry said. “I'll let all the heat come to the defense because that's what they took all year last year. They did a great job of stepping up when we needed them."

Uiagalelei stood out at the center: The 6-foot-4, 235-pound quarterback had thrived in a pair of relief performances for eventual No. 1 overall NFL draft pick Trevor Lawrence in 2020, but struggled last year as the full-time starter — throwing for nine touchdowns and 10 interceptions while completing just 56% of his passes.

Uiagalelei has been more efficient so far after a slow start in the Georgia Tech opener, completing 64% of his passes for a team that has reache at least 35 points in all four games. He has also thrown 10 touchdown passes with just one interception.

It's a big change for the Tigers, with coach Dabo Swinney noting last season's team “couldn't hardly score 21 points” but now has a QB with “his mojo back.”

“That's what I saw all summer, all camp,” Swinney said. “And as I said going into the Georgia Tech game, I just need to see him do it under the lights. I needed to see how’s he going to be when he makes a terrible throw or makes a bad decision or turns it over.”

Uiagalelei and the Tigers responded to adversity Saturday, and more could be ahead considering the schedule ahead.

While winning six straight league championships from 2015-20, Clemson won 52 of 55 games against ACC opponents while outscoring them by an average margin of 25 points over that span.

But last year's Tigers lost two league games and won four others by six or fewer points. And after surviving Saturday's shootout against last year's division champion, the Tigers host No. 10 North Carolina State — holding its first top-10 ranking since 2002 — in the second half of a critical two-week stretch in the division race while a trip to No. 23 Florida State looms Oct. 15.

“We didn't win the division or anything like that, but we stayed in control,” Swinney said. "It doesn't get any easier. ... But the name of the game is to find a way to win. And we did that tonight, and that's progress from last year.”