Utah in control of Pac-12 South, travels to face Arizona 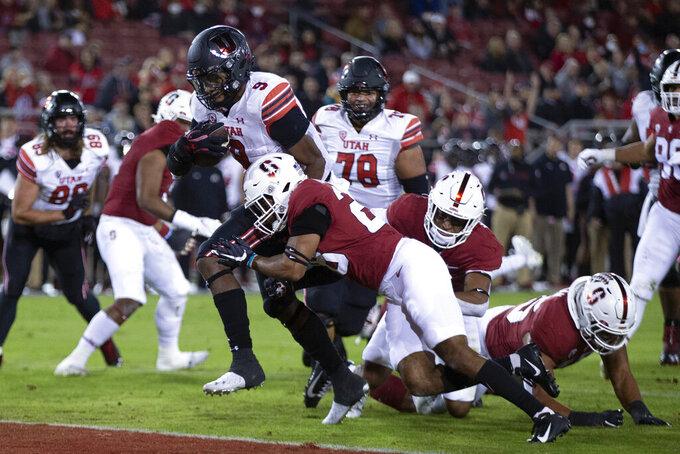 After two lopsided wins, the Utah Utes are on the verge of winning the Pac-12 South.

Coach Kyle Whittingham knows it. His players know it.

That doesn't mean they discuss it.

The Utes can clinch the South Division with a win over the Wildcats and a Washington win over Arizona State.

Arizona is a team that's just happy to be coming off a win, even if it was over a COVID-19-depleted California team that was missing seven starters and 24 total players and coaches. It was the first victory for first-year coach Jedd Fisch and a big boost for a program that hadn't won since Oct. 5, 2019.

“I like the way our team is playing, but we also know there’s a very, very good Utah team that’s playing really good football coming in,” Fisch said. “We’ve got our challenge ahead and we’re looking forward to it.”

Arizona has dealt with a lot of injuries at quarterback this season but found some success on the ground against California, running for 202 yards on 52 carries.

Sophomore Tavion Thomas had a huge game in Utah's 52-7 win over Stanford last week, running for 177 yards and four touchdowns on 20 carries.

Thomas struggled with fumbles early in the season and barely played in late September but has reemerged over the past month as the team's best option in the backfield.

“Well it was the talent level that we saw," Whittingham said. “His talent is very apparent and he’s got size, he’s got speed, he’s got quickness and pretty much everything you are looking for in a running back. Early on, the ball security wasn’t where it needed to be and by no means did we ever consider giving up on him.”

Will Plummer’s had a bit of a rough season, struggling with interceptions and injuries.

But right now Arizona’s quarterback has a lot of job security. That’s because there aren't many other options.

The team’s other two main options at quarterback — Gunner Cruz and Jordan McCloud — are out for the year with injuries. The Wildcats do have Jamarye Joiner, who played quarterback early in his college career before switching to receiver.

“He’s obviously dealing with some issues from the game last week,” Fisch said. “But I’m hopeful he’ll be good to go for Saturday’s game.”

The Wildcats certainly benefited by playing a California team that had so many players in COVID-19 protocol, but Arizona was trending in the right direction even before its long-awaited win.

Arizona had lost its previous two games against USC and Washington by seven points and five points, respectively, giving an indication that the breakthrough was coming.

Whittingham is two victories from becoming the all-time leader in wins in Utes history.

Utah has been consistently good during Whittingham's 17-year tenure with a 140-69 record. The Utes have had seven consecutive winning seasons dating to 2014 and have been above .500 in 14 out of 16 years.

Whittingham also has an 11-3 record in bowl games.