Vols confident QB Maurer will play against No. 1 Alabama 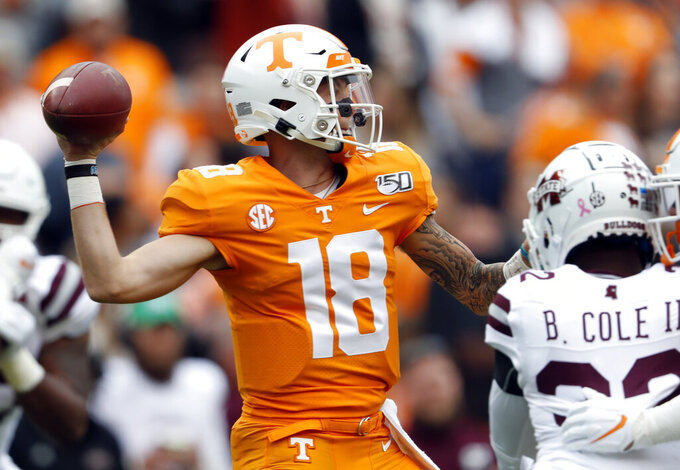 KNOXVILLE, Tenn. (AP) — Tennessee coach Jeremy Pruitt believes quarterback Brian Maurer will be available Saturday at No. 1 Alabama after a concussion prevented the freshman from finishing a 20-10 victory over Mississippi State last week.

"Brian took some reps last night at practice," Pruitt said Monday. "So he's going to be fine, I'm sure."

Maurer was making his second career start last week when he scrambled for a 13-yard gain late in the second quarter and landed head-first. Maurer initially stayed in the game, handing the ball off twice before throwing an interception.

That interception ended Maurer's afternoon, as Jarrett Guarantano handled Tennessee's quarterback duties for the rest of the game. Pruitt said afterward that his quarterback had sustained a concussion.

Pruitt was asked Monday why Maurer wasn't evaluated immediately after the 13-yard run.

"He hit his head on the ground, he jumps up and runs back in the huddle, gets a call, calls the next deal," Pruitt said. "Every play there's a lot of people running into each other and they're hitting their heads. I guess we could stop the game and evaluate everybody out there, but I don't think we have time for that."

Maurer's condition isn't the only issue facing Tennessee as it prepares for its toughest challenge of the season. Alabama (6-0, 3-0 SEC) has beaten Tennessee 12 straight times by an average margin of 25.6 points.

Alabama is currently favored by 35, but Crimson Tide coach Nick Saban is taking nothing for granted in this matchup with his former assistant. Pruitt was Alabama's director of player development from 2007-09, defensive backs coach from 2010-12 and defensive coordinator from 2016-17.

"Jeremy has done a really, really good job there," Saban said. "His team to me is emerging. They lost two games that they very easily could have won, but they're playing with great discipline, toughness. The players are really playing hard. They're executing well in terms of what they did and probably played their best game this last game against Mississippi State."

Tennessee's defense won't be close to full strength as it faces an Alabama offense averaging 51 points to rank second among all Football Bowl Subdivision teams.

Linebacker Henry To'o To'o received a targeting penalty in the second half of the Mississippi State game, which means the Volunteers (2-4, 1-2) must play the first half at Alabama without their second-leading tackler.

Alabama receiver DeVonta Smith also is facing discipline after getting ejected from the Tide's 47-28 triumph over Texas A&M. Saban said Smith probably would sit out the first half of the Tennessee game.

The difference is that Alabama arguably has the nation's deepest receiving corps, while Tennessee has a severe talent shortage at inside linebacker. Tennessee's linebacker depth took a hit earlier this season when Jeremy Banks was dismissed from the team and Will Ignont and Shanon Reid left the program.

"I just told him to keep his head up," Tennessee linebacker Daniel Bituli said after the Mississippi State game. "When he comes back in, in the second half for the next game, just play as hard as possible. I will try to hold it down for him."

Tennessee could have trouble making sure the game is still competitive when To'o To'o returns. Last season, Alabama outscored Tennessee 28-0 in the first quarter before coasting to a 58-21 victory.

Alabama quarterback Tua Tagovailoa has thrown an FBS-leading 27 touchdown passes with only one interception.

"It starts with their quarterback and wide receivers," Pruitt said. "There'd be very few NFL teams that probably could rival that part of their football team."

Pruitt said last year that Alabama was so explosive that the Tide occasionally had to try not to score 100 points. He reiterated those comments Monday.

As Pruitt discussed trying to slow down Alabama's offense, he joked about copying the strategy of Pulaski Academy, an Arkansas high school team that almost never punts and generally attempts onside kicks after every score.

"We really kind of considered that as our game plan - just don't give them the ball if we can do that," Pruitt quipped.