Vols' Pruitt optimistic Maurer will be available against UAB 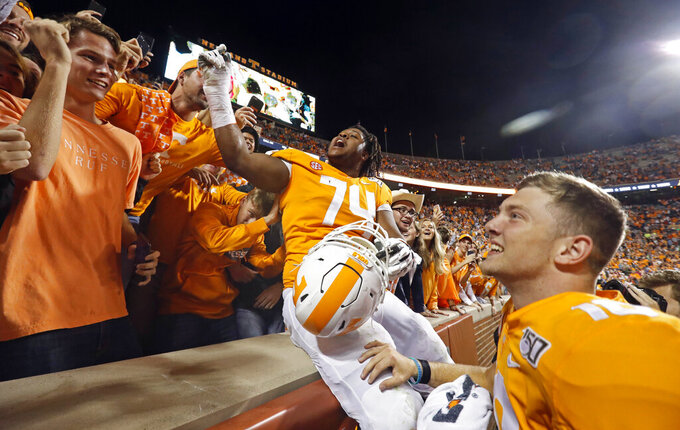 Pruitt should have renewed confidence in his backups if Maurer's unable to play against UAB (6-1).

Maurer didn't play in Tennessee's 41-21 triumph over South Carolina last week after sustaining concussions in each of the two games leading up to that one. Tennessee (3-5) threw for a season-high 351 yards without Maurer as J.T. Shrout and Jarrett Guarantano split time at quarterback.

"He's going to go out there and start practicing this week, so we'll see where he's at, at the end of the week," Pruitt said Monday. "He's ready to go."

Guarantano went 11 of 19 for 229 yards against South Carolina with a pair of touchdowns to Jauan Jennings, who also took several snaps in the Wildcat formation. Shrout was 7 of 11 for 122 yards with a 55-yard touchdown pass to Marquez Callaway.

"It's a little different, but you have to stay locked in throughout and I think we both did a good job of that tonight," Shrout said after the game about Tennessee's quarterback rotation.

Guarantano is facing his own injury issues. He left the South Carolina game midway through the third quarter with a broken bone in his left (non-throwing) hand.

Pruitt said Guarantano probably wouldn't practice Monday and will "be limited for a day or two" but should be available for the UAB game.

"He'll be ready to go unless there's something I don't know about," Pruitt said.

Guarantano's performance against South Carolina represented a return to form for a quarterback who has made 22 career starts. Guarantano had struggled through a disappointing junior season and lost his starting spot to Maurer earlier this month.

Guarantano was hit by South Carolina's T.J. Brunson as soon as he released the 19-yard pass to Jennings in the back of the end zone. That was Guarantano's final play of the day.

"That's the Jarrett that I'd seen in practice most of the year," Pruitt said. "It's good that it showed up."

Guarantano and Shrout performed well enough Saturday that it gives Pruitt some interesting choices to make on how to handle the quarterback position if Maurer's healthy enough to play.

Pruitt joked Monday about the possibility of copying former Florida and South Carolina coach Steve Spurrier by using all three quarterbacks against UAB.

"We might just run them in and out," Pruitt quipped. "Coach Spurrier used to do that, just run the plays in there and we won't have to signal. We can do like we did back when I played for my dad. He whispers the play, you run up there and whisper it to the quarterback and we break the huddle. I kind of like that, so we might play them all that way."