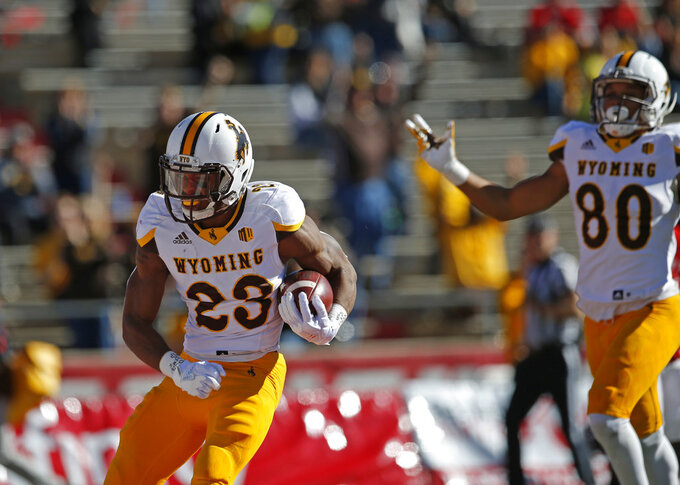 Wyoming running back Xazavian Valladay (23) scores a touchdown against New Mexico during the first half of an NCAA college football game in Albuquerque, N.M., Saturday, Nov. 24, 2018. (AP Photo/Andres Leighton) 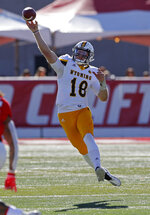 ALBUQUERQUE, N.M. (AP) — Xazavian Valladay and Nico Evans combined for more than 300 yards rushing and three touchdowns for Wyoming as the Cowboys became bowl eligible Saturday with a 31-3 win over New Mexico.

Valladay had 192 yards and two scores, and Evans, who did not practice all week because of a right ankle injury went for 142 yards and one touchdown.

"We felt like we would have some good matchups and that started with the guys up front," Cowboys coach Craig Bohl said of the offensive line. "We were a little bit concerned because we had just one regular back who was healthy that that was Xaz. But Nico came in and just did a phenomenal job and kudos to him, X and particular the offensive line."

But the Lobos (3-9, 1-7) were even worse through the air as Coltin Gerhart and Sheriron Jones combined for three completions and 34 yards. At halftime, New Mexico had 3 yards passing.

Wyoming took control of the game from the outset, going 65 yards on the opening possession, with Valladay slicing in from 21 yards out.

By halftime, the Cowboys led 14-3 and the game was never seriously in doubt thereafter.

New Mexico managed just 83 total yards, while Wyoming had 366 yards on the ground.

"To me, this was a beaten-down team, playing a bigger, stronger, more powerful team," Lobos coach Bob Davie said.

Wyoming has won four in a row and proved to be one of the hotter Mountain West teams over the season's final month. The Cowboys' winning streak reversed a four-game losing skid that nearly knocked them from bowl contention.

"It's a credit to the men in that room, both coaches, players and strength staff," Bohl said. "To be able to continue to not have doubt, stay together, pull together and that's the Cowboy way."

New Mexico, after consecutive 3-9 seasons, is at a crossroads as Davie's seven-year tenure is on somewhat shaky ground, especially with the attendance mired in a downhill spiral throughout the season, totaling about 100,000.

With a bowl appearance it would be Wyoming's first time going to three consecutive bowl games.

The Cowboys earned bowl eligibility with their sixth win, but another game is far from assured as, entering the weekend, there were 23 teams vying for the final six bowl spots that had not been unofficially committed. The Mountain West has five guaranteed bowl tie-ins, and the Cowboys are the sixth conference team to be bowl eligible.

"We can control the things we can control," Bohl said. "We finished with four wins against teams in our conference and we had a convincing win on the road against a Mountain West team. It was a great way to end and hopefully we can keep on playing."

New Mexico's season is over, ending in a seven-game losing streak for the second consecutive season.