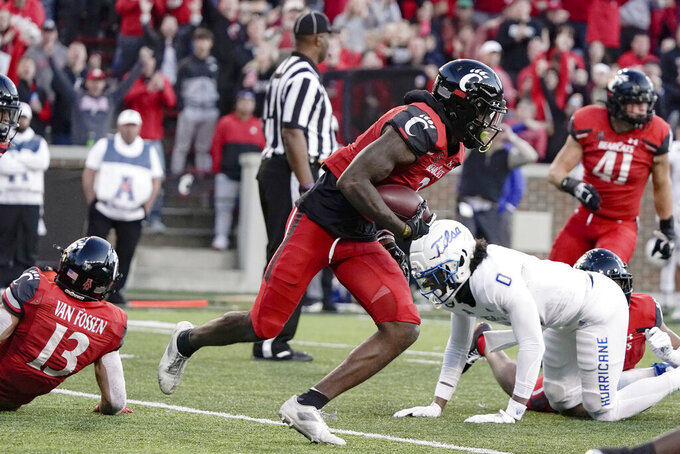 American Athletic Conference Commissioner Mike Aresco said Friday he will “vigorously” oppose a College Football Playoff expansion model that “protects” Power Five leagues with automatic access for only their champions plus one.

"I don't want to see a system that would reward privilege for the sake of privilege," Aresco said.

The CFP management committee, comprised of 10 Bowl Subdivision conference commissioners and Notre Dame's athletic director, met last week in Dallas to again discuss growing the playoff from its current four-team field. The group needs to come to a unanimous consensus on a new format before expansion can move forward. While even one dissenter can hold up the process, Aresco is confident he is not alone.

A 12-team model was proposed in the summer that would include six guaranteed spots for the highest-ranked FBS conference champions and six at-large selections, with no limit on the number of teams a conference can have in the field.

Aresco confirmed a Sports Illustrated report that an alternative model was discussed last week that provided automatic access only to the champions of the Atlantic Coast Conference, Big Ten, Big 12, Pac-12 and Southeastern Conference, and only the highest-ranked champion from the so-called Group of Five conferences.

Aresco has been a vocal advocate of expansion while pushing back on the P5/G5 designation for years. He said the current CFP model doesn't give teams from outside the Power Five a fair chance to make the field.

“This branding is very harmful to us,” Aresco said. “It's as if we play in a different division.”

A school from the Group of Five has never been close to making the final four in the eight-year history of the College Football Playoff.

Cincinnati from the American is currently fifth in the CFP rankings, the best showing for a Group of Five team ever.

Aresco said guaranteeing access only for the wealthier Power Five leagues in a new playoff format keeps the “caste system” in place.

Expansion talks have slowed in recent months as some commissioners have expressed concerns about a 12-team model that was unveiled in June and suggested the group reconsider going to eight.

There are myriad obstacles to eight that would make it nearly impossible to gain the support needed. There was hope in the summer that the proposed 12-team model could be agreed upon and implemented by the 2024 season.

That could still be the case, but the clock is ticking. The next scheduled meeting with the management committee is Dec. 1 in Dallas. If the commissioners can at least get consensus on the number of teams in a new format, they can make a recommendation to the university presidents and chancellors who make up the oversight committee in early January.

Approval by the presidents would set a course for expansion before the current 12-year contract with ESPN runs out after the 2025 season. CFP executive director Bill Hancock has said if consensus cannot be reached by the end of the year, expansion will likely be tabled and the current format will remain in place until the end of the deal.

Aresco said he doubts there will be enough support for the so-called five-plus-one to to move forward. Not only does he expect the other G5 commissioners to oppose it, but also the P5 members of the four-man working group that came up with the 12-team model.

The group considered various ways to populate a 12-team field, including the five-plus-one idea that former Pac-12 Commissioner Larry Scott publicly pushed for when the proposal was first made public.

Sun Belt Commissioner Keith Gill declined to comment when reached Friday, but in June he responded to Scott's call for automatic access only for Power Five champions by saying “playoff spots should be earned, not given.”

“If you are a deserving team, you should have no concerns being left out of the playoff,” Gill said then.

Aresco said Friday that having five-plus-one put forward again by some Power Five conferences leaders so late in the process was “really disconcerting.”

“It's not our job to protect them,” he said.