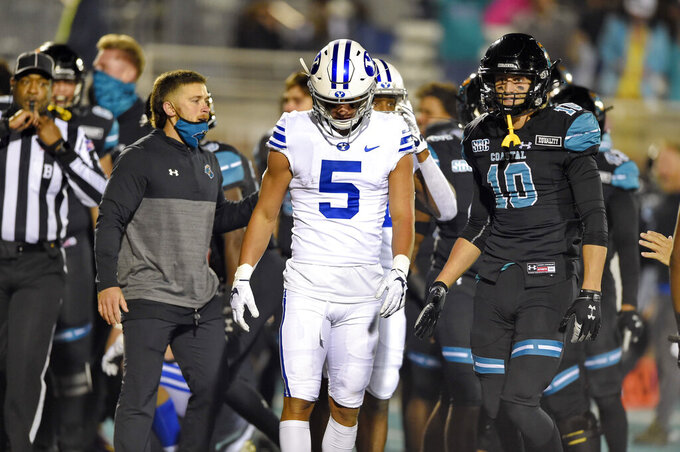 The eighth-ranked Cougars and No. 14 Chanticleers put on an intense and chippy show Saturday with a thrilling end reminiscent of the Titans-Rams Super Bowl in 2000.

The result was a wild celebration in Conway, South Carolina, after the 22-17 victory, an end to the BYU hype and maybe an outside chance for Coastal Carolina to sneak into a New Year's Six game.

But what if the lasting legacy of this showdown of unbeatens thrown together on a Wednesday is a willingness in college football to try something like it again?

Maybe not to such an extreme. The BYU-Coastal Carolina game became official 56 hours before kickoff. But creating some flexibility in schedules to create big games would be a tremendous addition to college football. Especially for the non-Power Five teams that could use a late-season boost to a resume to improve their chances to reach a major bowl — or even crack the playoff, as unlikely that is.

There is a chance that if No. 7 Cincinnati wasn't recovering from an COVID-19 outbreak, BYU would have been in Ohio this weekend, unable to take Coastal's call when No. 25 Liberty had to pull out because of its own issues with the virus.

There are plenty of reasons why holding open dates late in the season for the football equivalent of college basketball bracket busters would be difficult to do. It's hard to sell tickets in advance to games listed as TBD.

Maybe the more realistic goal would be simply persuading programs big and small to not schedule so far out. In college basketball, teams that are confident they're going to be good frequently make matchups for more significant early season nonconference games in the preceding offseason.

College football is not quick to embrace change, but figuring out a way to recreate the BYU-Coastal Carolina experience would be good for a sport looking for ways to make more regular-season games meaningful.

Having Justin Fields makes up for a lot of problems.

“If you’re going to be a head coach for one day, you want Justin Fields with you,” said longtime defensive line coach Larry Johnson, who was filling as Ohio State's coach with Ryan Day in isolation with COVID-19. "That was pretty special. He’s a special young man.”

No. 3 Ohio State played without three offensive line starters — and a key backup — its leading tackler and a starting defensive back against Michigan State, and other than a few poor shotgun snaps it would have been hard to notice a difference.

Fields was especially good, calmly leading an offense that needed him to provide a few more answers than it usually might. And the Buckeyes' defense was dominant.

What's next for the Buckeyes and the Big Ten? Michigan is having COVID-19 issues and if it can't play the Buckeyes next week, that would put Ohio State below the minimum number of games required by the conference to play for the league title on Dec. 19.

The minimum games rule came from the athletic directors, and they would have to change it. Wisconsin AD Barry Alvarez suggested that his colleagues seriously consider making changes to help the Buckeyes (5-0), clearly the conference's best team, be better positioned to make the playoff.

Dropping the six-game minimum is a good idea. Even better would be juggling next week's schedule to ensure Ohio State — and really all the teams available to play — gets a game in, meets the minimum and has a chance to face No. 16 Northwestern, which secured its spot in Indianapolis as West Division champion while not playing.

The College Playoff Selection committee has shown pretty clearly it believes Ohio State is top-four team. The Big Ten is not going to provide much in the way of opportunities for quality wins right now for the Buckeyes. So the conference should concentrate on quantity and benchmarks. Do what's necessary to give Ohio State (CFP No. 4) the opportunity to have seven games and have a conference championship on its resume.

The committee is directed to use conference titles sort of like tiebreakers when teams are close. Last week committee chairman and Iowa AD (no conflict there?) Gary Barta said Ohio State and Texas A&M (CFP No. 5) were close. The Aggies (7-1) are going to have both more total games and high-end victories than the Buckeyes. Not only has A&M beaten No. 6 Florida, but even the Auburn team the Aggies dominated in the fourth quarter on Saturday looks better than everybody Ohio State has played so far other than surprising No. 10 Indiana.

A 7-0 record and a conference championship would be a nice hand for the Buckeyes to play.

The Big Ten needs to figure out a way to deal it out to Ohio State.

Hard to believe the quarterback of an unbeaten Notre Dame team could play as well as Ian Book has and still be far from a lock to even be a Heisman Trophy finalist.

Book is deserving of consideration for sure and he is closing strong, but it's a tough field for him to break into.

BYU's Zach Wilson goes to the back of the line after losing to Coastal Carolina. And maybe Alabama's real Heisman candidate should be receiver DeVonta Smith, who caught three TDs against LSU, but it's a quarterback's award now.

Coming into Saturday, when Book put up 348 total yards and accounted for five touchdowns against Syracuse, those four QBs ranked among the top 10 in the nation in passer efficiency rating. Book was 33rd at 148.89.

Coming into Saturday, all four ranked in the top 10 in the nation in total offense per game. Book was 33rd at 278.9.

Book will get a second chance to beat No. 4 Clemson on Dec. 19 in the Atlantic Coast Conference championship. This time with Lawrence in the lineup for the Tigers.

If Book can lead the Irish to another victory, those stats won't matter nearly as much. Book's got a case, but for now he's running behind.

AROUND THE COUNTRY: Maybe the most stunning result of the season: Rice 20, No. 15 Marshall 0. Few teams have had a more difficult time just getting on the field this year than Rice. The Owls were playing their fourth game and beat a ranked team for the first time since 1997 ... The South Carolina coaching search has been pointing toward Oklahoma assistant Shane Beamer, son of Virginia Tech great Frank Beamer, for about a week and landed there Saturday night. ... If you think you know who is really good in the Pac-12, give it a week and it'll likely change. ... Colorado, with breakout star Jarek Broussard, is quickly becoming one of the biggest surprises in the country under new coach Karl Dorrell. ... Coach Sam Pittman got a lot of deserved praise early in the season for having Arkansas competitive in the SEC. The Razorbacks have remained much improved, but it turns out Missouri's Eliah Drinkwitz, whom Arkansas tried to hire before landing on Pittman, is the first-year SEC coach having the best season. The Tigers improved to 5-3 with a wild victory against the Hogs. ... Blowing out Kansas State, as Texas did, probably won't be what determines whether the Longhorns keep coach Tom Herman. It should come down to whether Urban Meyer wants to be the next coach. If not, Texas is probably better off saving the $24 million it would take to get rid of Herman and his staff and give it another year. ... No. 12 Iowa State clinched a spot in the Big 12 title game — and a rematch with No. 13 Oklahoma — before blasting West Virginia thanks to No. 19 Oklahoma State losing to TCU. Cyclones coach Matt Campbell could be Plan C for Texas behind wooing Meyer and keeping Herman. ... Akron broke its 21-game losing streak, the longest in major college football, with a 31-3 victory over Bowling Green, which has lost eight straight. ... Another streak of sorts ended Saturday. Boston College said it had a football player test positive for COVID-19 for the first time since the team returned to campus in late June. The school said the unidentified player tested positive after going home for Thanksgiving.

This story has been corrected to show that the Big Ten conference has a six-game minimum, not five, for teams to play for the league title.