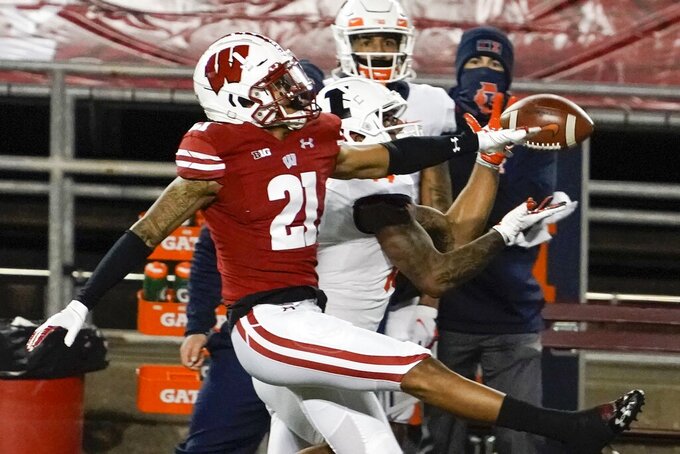 MADISON, Wis. (AP) — Wisconsin cornerback Caesar Williams questioned pass interference calls made during last weekend's loss to Northwestern and said the penalties won’t cause the Badgers to play any less aggressively the rest of the season.

The Badgers were called for pass interference four times Saturday in Northwestern’s 17-7 victory. Two of the penalties came on the game’s opening drive, which ended with a Northwestern touchdown.

“At times I felt like the ref maybe had purple underneath their jerseys, I mean under their white-and-black shirts,” Williams said Tuesday.

Northwestern climbed from 19th to 11th in the AP Top 25 after the win while Wisconsin (2-1) tumbled from 10th to 18th. Northwestern (4-1) also took command of the Big Ten West Division race while dealing a blow to the Badgers’ chances of reaching the conference championship game for a second straight season.

Williams had an interception nullified in the second quarter when he was called for pass interference. He said defensive coordinator Jim Leonhard wasn’t coaching the secondary any differently due to the penalties and said “he doesn’t see them as pass interference calls and neither did the defense.”

“Maybe refs aren’t used to seeing perfect reps and they throw a flag,” Williams said while laughing. “It is a hard job, but I don’t think a flag should hinder a defensive back’s confidence in what they do.”

Wisconsin is scheduled to host Minnesota (2-3) on Friday, though the Golden Gophers are dealing with pandemic-related issues. Minnesota called off practice Tuesday and will conduct all meetings virtually as a result of presumptive COVID-19 positive tests.