Bowl spot on the line for Utah, Washington State in finale 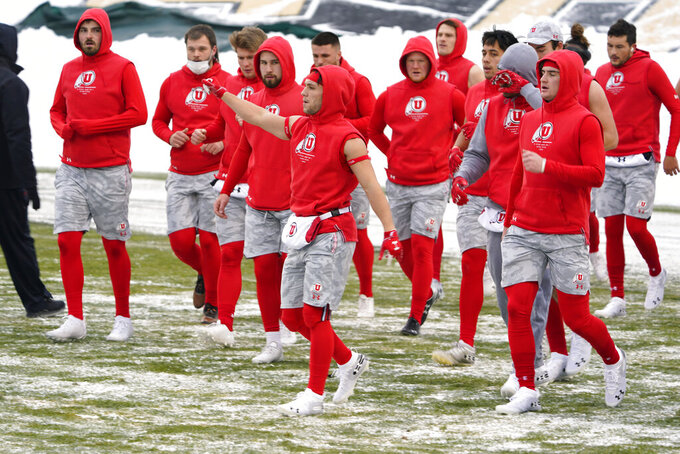 Utah wide receiver Britain Covey, center, raises his arm as he warms up with teammates in sub-freezing temperatures and light snow before the first half of an NCAA college football game Saturday, Dec. 12, 2020, in Boulder, Colo. (AP Photo/David Zalubowski)

The start-and-stop nature of the season has left Utah receiver Britain Covey and others with one prevalent feeling — burnout.

The Utes, who had their opening two games canceled because of COVID-19 issues, finish the regular season portion of their schedule by hosting Washington State on Saturday at Rice-Eccles Stadium.

“The honest truth is, and I don’t think that anyone can criticize teams for saying this, we’re all pretty burned out,” Covey said after Utah beat Colorado 38-21 last weekend. “We’re pretty burned out with the emotional drag of the season. At the same time, we’re ready to finish strong.”

The Utes (2-2) — along with Washington State (1-2) — are still in contention for a bowl appearance (the conference requires a .500-or-better mark this season). If invited, Utah will have a player-driven discussion.

“That will be, in my opinion, up to the players,” said Kyle Whittingham, who is 133-66 as head coach of the Utes heading into his 200th game. “If they’re up for it and want to do it and we’ve got the record we need to have — obviously, we’ve got to win— then we’ll move forward. If they feel like enough is enough, we won’t.

“To me, they’ll handle that within themselves. I’ll back them whatever way they want to go.”

First things first, an eager Washington State squad that will be playing for the first time in 13 days. The Cougars' game last week against California was canceled less than two hours before kickoff due to a COVID-19 case within the Golden Bears program.

Washington State players were on the field for pregame warmups when news trickled out the game was getting canceled.

It was the third cancellation of the season for the Cougars.

Washington State played USC on Dec. 6. Before that, the Cougars' previous game was on Nov. 14 against Oregon.

“All they wanted to do was play a game. And I’m not taking shots at Cal, we’ve all been through it this year,” Washington State coach Nick Rolovich said. “It’s been hard on the players for all the teams.”

One of the unknowns for Washington State is whether standout running back Max Borghi will play in his first game of the season Saturday. Borghi appeared set to make his season debut last week against Cal before the cancellation.

Borghi has been dealing with a back injury that caused him to miss Washington State’s three previous games. Borghi was an honorable mention all-Pac-12 selection a year ago after scoring 16 total touchdowns.

Washington State’s lone home game was Nov. 14 against Oregon, and while there was hope of closing out the season at home, simply playing was the more important objective.

“Of course we’d like to play at home but that necessarily wasn’t a big point of emphasis in the discussion,” Rolovich said.

Devin Lloyd, one of the leaders of the Utah defense, was recently named a finalist for the Butkus Award, which goes to the nation's top linebacker. Lloyd leads the team in tackles with 38. He also has a streak dating to last season of seven straight games with at least one tackle for loss.

Utah quarterback Cameron Rising is rehabbing after shoulder surgery, Whittingham said. The sophomore earned the starting job in camp, only to suffer the injury in a season-opening loss to Southern California. Rising was 3 for 6 for 45 yards and an interception.

“He’s got a long road ahead of him," Whittingham said. "He’s determined. He’s got the right attitude.”

Jordan was again named the league’s freshman of the week after a 147-yard, two-touchdown performance against Colorado. Redding was the special teams player of the week recipient for hitting field goals of 38, 42 and 43 yards. He's 7-of-7 on field goals and hit all 11 extra points this season.