Chasing rivals can tempt coaches to question everything 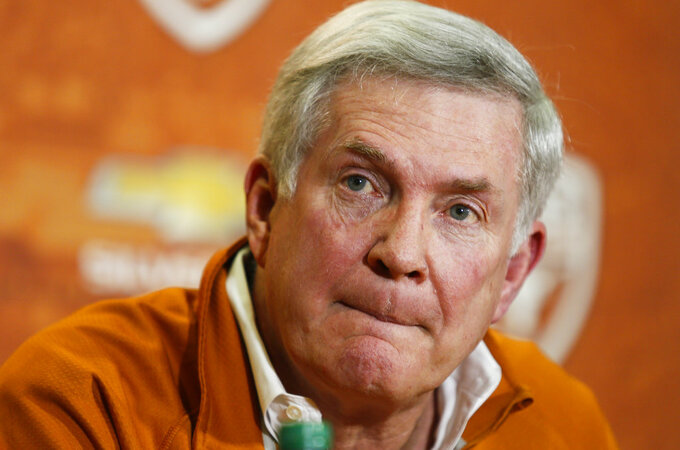 FILE - In this Dec. 15, 2013 file photo Mack Brown speaks during a news conference at the University of Texas in Austin, Texas. Brown had his an Oklahoma problem when he was coach at Texas. By then the Big Eight had morphed into the Big 12 and the Longhorns and Sooners were playing for pole position in the Big 12 South every October. Texas lost five straight to the Bob Stoops’ Sooners from 2000-04, while going 52-6 against everybody else. Some of college football’s most successful coaches have been labeled with the dreaded ‘Can’t win the big one’ tag because of a string of failures against rivals. Coming up short in the game that matters most to your fans can tempt a coach to question everything _ from his Xs and Os to his Jimmys and Joes. (AP Photo/Jack Plunkett)

Tom Osborne began one of the great coaching careers in college football history with five straight losses in the most important game on Nebraska's schedule.

"It was probably getting to the point where it was almost a one-game season," Osborne recalled this week. "We could win a lot of games, nine, 10 whatever, but if you didn't beat Oklahoma it was not a good year. Fortunately, I was able to survive that."

Some of the game's most successful coaches have been labeled "can't win the big one" because of repeated failures against rivals. Coming up short in the game that matters most to your fans can tempt a coach to question everything — from his Xs and Os to his Jimmys and Joes.

Things have not quite reached that level of urgency at Michigan for Jim Harbaugh. But it's getting there. Harbaugh is 0-3 against rival Ohio State as coach of the Wolverines heading into Saturday's latest installment of the Big Ten's biggest rivalry. No. 4 Michigan has lost six straight overall to No. 10 Ohio State.

As usual, The Game will help decide the Big Ten championship. And as has often been the case, there are national championship implications for both teams.

"To us, this is as big as it gets. Doesn't get any bigger," Harbaugh said. "Most important thing in our football lives. For the whole 365 days."

From the early 1970s through the 1980s, Nebraska-Oklahoma was about as big as it got in college football. Sooners-Huskers was a top-10 matchup 15 times from 1971-88. Two other times, one of the teams was ranked 11th and the other was top 10. The game was usually for Big Eight supremacy and often a shot at the national championship was on the line.

Barry Switzer's Sooners owned Osborne's Huskers for the first five seasons of their careers, winning each meeting, including three blowouts.

Osborne said he realized defending Oklahoma's wishbone offense required more than just a week's worth of preparation. Nebraska started dedicating a period of each Monday practice to OU's offense throughout the season. Osborne said it became impossible to emphasize the game any more to the players. If anything, he would have to temper their enthusiasm and not let past failures affect the confidence of both coaches and players. Nebraska's issues with Oklahoma, Osborne said, were more physical than mental.

"I think it can get in your head, but I think probably the biggest difficulty we had was just pure athleticism," Osborne said. "Sometimes losing can be very instructional."

Osborne started looking for more mobile quarterbacks like Oklahoma's and introduced the triple-option into his I-formation offense.

"Oklahoma wasn't necessarily our enemy. They were our friend because we weren't going to be able to pull them down to our level. We had to get up to their level. And eventually we got there," said Osborne, who finished his career 13-13 against Oklahoma, dominating the Sooners in the '90s after Switzer left for the NFL, and winning three national titles.

Mack Brown had his own Oklahoma problem when he was coach at Texas. By then the Big Eight had morphed into the Big 12 and the Longhorns and Sooners were playing for pole position in the Big 12 South every October.

Texas lost five straight to Bob Stoops' Sooners from 2000-04 while going 52-6 against everybody else. Brown said pressure mounts exponentially in rivalry games for the team on a losing streak.

"The guys get tight," said Brown, who finished 7-9 against Oklahoma at Texas. "They worry so much about being miserable. Fans being all mad at them until the next year."

Like Osborne, Brown started working on Oklahoma all year. Texas would game plan for the Sooners without the players knowing, practicing plays the staff intended to save for Oklahoma.

"But we didn't want them to think that we were putting in plays for that game and running them a few times because we didn't think we could win with our regular stuff," Brown said.

In 13 seasons (1988-2000) at Ohio State, Hall of Fame coach John Cooper went 2-10-1 against Michigan. Four times, the Buckeyes were ranked in the top five when they lost to Michigan.

"Do I wish we won more? Absolutely. Yeah, you kidding me? But after the game's over there's nothing you can do about it except go out and try to recruit better players and coach better," said Cooper, who went 111-43-4 (.715) at Ohio State.

Since Cooper was replaced by Jim Tressel in 2001, Ohio State has lost just twice to Michigan, including six straight wins since Urban Meyer took over in 2012. Meyer has been a master in rivalry games. With Florida, his teams went 16-2 against Florida State, Tennessee and Georgia. He also went 4-0 at Utah against BYU and Utah State.

Harbaugh, the former Michigan quarterback who guaranteed and then delivered a victory against Ohio State in 1986, was lured back to his alma mater four years ago to close the gap between the Wolverines and Buckeyes. He has done that, going 38-12 and coming within a disputed fourth-down spot of winning at Ohio State two years ago.

But Michigan is not paying $7.5 million a year to Harbaugh for close.

"(A win) would mean so much. For our team and everybody that's for us," Harbaugh said. "We know how important it is for everybody that is us."