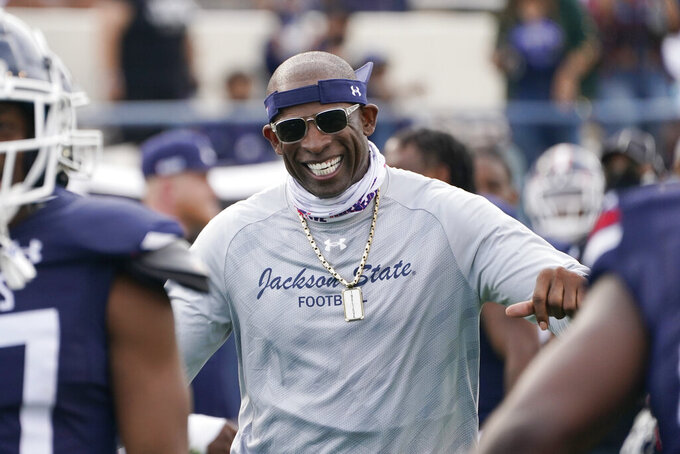 FILE - Jackson State football coach Deion Sanders smiles as he greets his defensive squad after they had recovered a Mississippi Valley State fumble for a touchdown during the second half of an NCAA college football game, Sunday, March 14, 2021, in Jackson, Miss. Sanders is trying to win games at Jackson State and raise the profile of historically black colleges and universities around the nation. He's off to a solid first step on the field with a 4-3 mark in the spring. This fall will be the real test. His team opens with Florida A&M on Sept. 5 in the Orange Blossom Classic. It’s one of eight games on Jackson State’s schedule that will be televised on an ESPN network. (AP Photo/Rogelio V. Solis)

Coach Prime, aka Deion Sanders, sauntered into the office of Nick Saban with a marching band following his lead.

Yep, that happened — in a scene for an Aflac commercial featuring the two high-profile college head coaches.

It's the sort of splash Sanders hopes to make this fall in his second season at Jackson State. With that, another objective: Raising the profile of schools such as Jackson State and other historically Black colleges and universities.

“We’re going to fight and do our darndest to start changing the landscape of HBCU football," Sanders said in an interview with The Associated Press. "Then, consequently, we can go to the next step and the next level. The fight is not going to be easy. Getting the players to commit to a historically Black college is not easy because you’ve got to level the playing field.

“You’re competing against a Power Five that has 100 times more resources than we do, and the exposure," said Sanders, whose upcoming docuseries “Coach Prime” will debut Sunday on Barstool Sports. "So it’s not a level playing field whatsoever. But with the type of person that's coming to these historical Black colleges, I think we can.”

Sanders took full advantage of his time on the commercial set with Saban, the architect behind six national championship teams with the Crimson Tide. Sanders even brought some of his staff with him. In between commercial takes, they talked X's and O's.

“Nick Saban to a coach is like heaven,” said Sanders, who partnered with Aflac in an effort to help close support gaps for HBCUs. “That’s like a basketball player meeting (Michael) Jordan."

It’s not the first time he’s chatted with Saban. They also got acquainted when Saban was recruiting one of Sanders’ sons, two of whom are currently on the Tigers roster.

“Definitely (can learn from Saban), just being on the set, seeing how he handles the staff, see how he handles himself, seeing the football side of it,” said Sanders, who was brought on board at Jackson State, located in Mississippi, last September.

The first step in turning around a Tigers team that competes in the Southwestern Athletic Conference was introducing a new mindset. So far, so good. They went 4-3 in a spring campaign.

This fall, a bigger test. His team opens with Florida A&M on Sept. 5 in the Orange Blossom Classic. It will be shown on ESPN2, one of eight times Jackson State is scheduled to appear on an ESPN network.

“I have so much hope,” said Sanders, a Hall of Famer and two-time Super Bowl champion. “I’m optimistic all the time and I look for the good in everything and everybody.”

The charismatic Sanders has leaned on his ties to help orchestrate change. The football uniforms for the Tigers were provided by Under Armour, while Sanders said Walmart assisted with a new turf field.

“That was like Santa Claus coming to town," Sanders said of the uniforms, which he proudly displayed in various blue, white and red combinations in a YouTube post. "The new field? Now we don’t have to drive 15 minutes just to practice because the field was unplayable. All of those things are wonderful. It’s really appreciated. Just thankful.”

His association with Aflac includes a $75,000 donation to the Jackson State’s athletic department along with the company being a support partner of Sanders’ football camp. The supplemental insurance provider has been a long-time supporter of HBCUs, including a $1 million commitment to the Morehouse School of Medicine and donations to HBCU-focused college football events.

“Oftentimes, all these kids need is that push and exposure and that’s what we’re trying to bring simultaneously,” Sanders said. “I know it’s going to happen."

Sanders is plenty busy these days getting ready for the season. He’s out the door around 5:15 a.m. each morning and to work by 5:40, where he works out on the elliptical machine followed crunches (he does 2,400 crunches a week). Then, it’s breakfast with the team — he sits at a different table each day — meetings, practice, more meetings and a re-watch of practice film.

After lunch, there are interviews with the media, a team walkthrough, more meetings, dinner and finally home around 9 p.m.

“That’s my day,” Sanders said with a laugh. “My niece and nephew came up to spend some time with me last week and I brought them with me every day. They said, ‘Uncle Deion, we leave when it’s dark and we come home when it’s dark.’ I said, ‘Welcome to my life.’ They’re like, ‘We didn’t even get to swim.’”