Coming off big win over Irish, Cincinnati wary of Temple 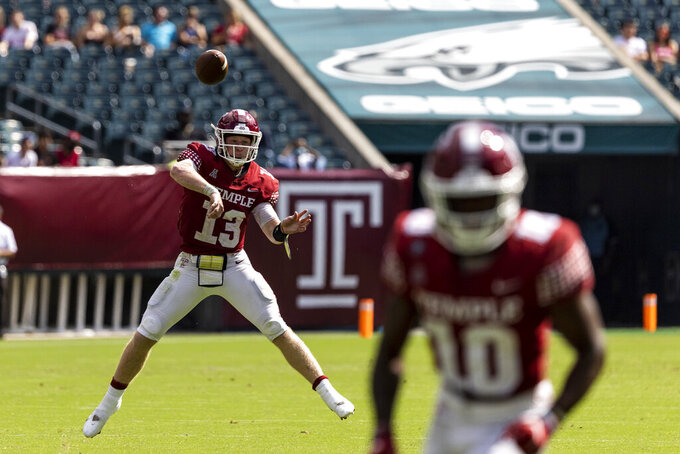 Temple quarterback Justin Lynch throws a pass against Boston College during the second half of an NCAA college football game on Saturday, Sept. 18, 2021, in Philadelphia. (Tyger Williams/The Philadelphia Inquirer via AP)

CINCINNATI (AP) — Coming off the biggest win in program history, No. 5 Cincinnati has had a short week in which to shift focus to the American Athletic Conference opener Friday night against Temple, a team that has played the Bearcats tough in recent years.

“Last week is over,” Bearcats coach Luke Fickell told reporters. “Not taking any questions about last week. I don’t like to continue to talk about the past. The bullseye is only going to get bigger.”

The Bearcats (4-0) are trying to become the first team outside the Power Five to claim a spot in the College Football Playoff after a huge 24-13 win at Notre Dame on Saturday. But there is much more work left to do.

Cincinnati has won 30 straight games against unranked opponents. The Bearcats are favored by nearly 30 points on Friday night, according to FanDuel Sportsbook.

But Fickell’s message to his team can go no further than the final scores in the last three meetings with the Owls (3-2). Last time they met (last year’s game was canceled due to COVID-19), then-No. 19 Cincinnati held off Temple 15-13 to snap a four-game losing streak to the Owls.

The last three meetings have been decided by a combined 20 points with Temple winning three of them.

“Temple has been a thorn in our side since I’ve been here,” Fickell said. “They have played us really, really well.”

Getting off to a fast start will be key for the Bearcats against a Temple team that has been outscored 50-7 in the first quarter. The Owls have trailed at the end of the first quarter in each of their games.

Bearcats quarterback Desmond Ridder is the winningest active QB in the country, but he is just 1-2 vs. Temple. He cautioned his teammates about Friday’s game.

“I remember going up there, they kind of stuck it to us the whole game,” Ridder said. “All these games have been four-quarter games. Temple’s always going to come out and give us their best. They are tough and nasty.”

Temple is coming off an impressive win at home against Memphis in which redshirt freshman QB D’Wan Mathis, a transfer from Georgia, went 35-for-49 for 322 yards with three TDs. His 35 completions tied a 53-year-old school single-game record. Mathis has thrown for 614 yards and five touchdowns and rushed for 48 yards the last two games.

The Owls boast one of the nation’s most experienced offensive lines. But Cincinnati’s defense will pose some challenges.

“They force you into mistakes,” Temple coach Rod Carey said. “They have the same cast of characters, and they’ve added good talent to it. It will be a challenge going on the road into as good a Friday night environment as we will probably play in.”

Cincinnati’s No. 5 ranking in this week’s AP Top 25 is its highest since 2009, when then-head coach Brian Kelly’s Bearcats reached No. 4 in the rankings twice on the way to a 12-1 season and a Big East Conference title.

Temple is the last team to beat the Bearcats at Nippert Stadium, where they have won 22 straight games. The Owls defeated Cincinnati 35-24 on Nov. 10, 2017. Cincinnati owns the nation’s second-longest home winning streak after ending Notre Dame’s 26-game streak on Saturday. Clemson has won 31 straight at home.