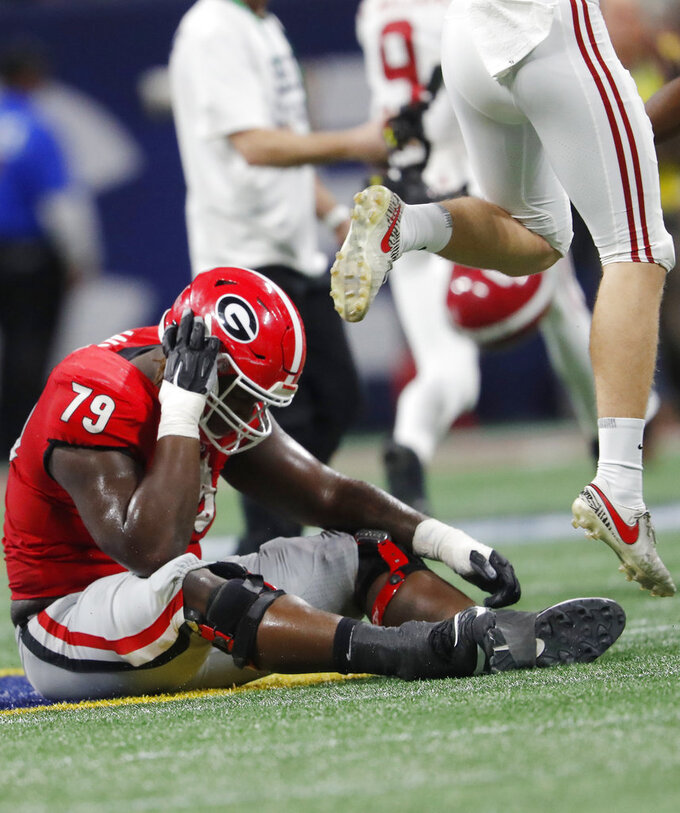 ATLANTA (AP) — Georgia coach Kirby Smart gambled big on a fake punt as he looked for a way to beat No. 1 Alabama and put his team in the College Football Playoff.

The fake ended with a flop, and exactly 2 minutes later the Crimson Tide took their first lead, completing a comeback from a two-touchdown deficit for a 35-28 win in the Southeastern Conference championship game.

The No. 4 Bulldogs were left with their second devastating loss to Alabama in 11 months and only a longshot hope they'll be included in the playoff. Putting Georgia (11-2) in the playoff field over a one-loss Power Five conference championship team would require a precedent-setting vote from the playoff committee.

But his call for a fake punt helped to seal Georgia's fate.

With the score tied 28-all and only about three minutes remaining, Smart sent backup quarterback Justin Fields on the field with the punt team on a fourth-and-11 play from midfield.

Fields took the snap but was unable to find a receiver and was stopped after a run for only 2 yards — far short of the yardage needed for the Bulldogs to keep the ball.

"But in the last second they saw it," Smart said of the Alabama defense. "And we had a way to check out of it, but we took too long to get it snapped. ... It got taken away at the last second, and we didn't make the play."

Smart stood by his call.

"He wanted to win the game," Fields said. "You want to do anything to win. I caught it. I just tried to go out and execute the play to the best of my ability. ... It was there at first ... and it got covered. There was nowhere to go with the ball."

Georgia (11-2) now awaits Sunday's announcement of the four-team playoff field. The Bulldogs made the playoff last year after beating Auburn in the SEC championship game and eventually lost to Alabama for the national title.

Georgia players know they lost the ability to control their playoff fate.

Smart and Saban lobbied for the Bulldogs to make the playoff.

"Well, it boils down to one thing," Smart said. "Do you want the four best teams in or not? It's that simple. ... Give that coach across the sideline a vote who he doesn't want to play. He'll start with us, I promise you. You don't want to play us."

Added Saban: "... I think based on what I've seen, they're one of the four best teams in the country. And I also said I don't want to play them again, which I think is the ultimate compliment, I think, that I can give them."