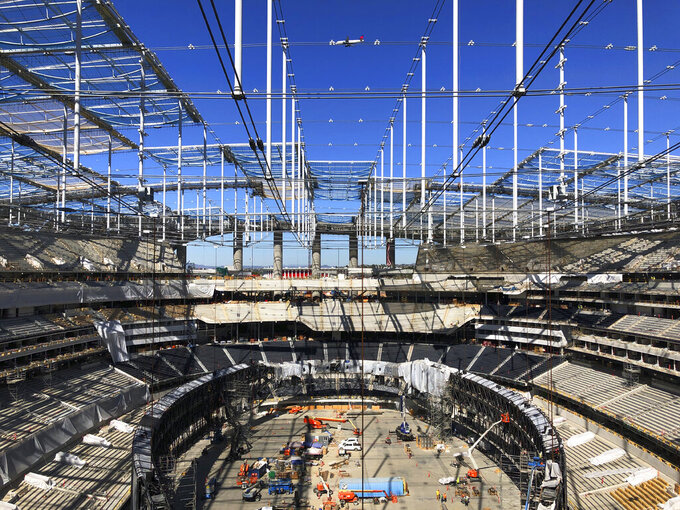 An airplane flies past as construction continues at SoFi Stadium on Wednesday, Feb. 26, 2020, in Inglewood, Calif. The leaders of the Pac-12 and Mountain West conferences formally announced the new LA Bowl on Wednesday at the under-construction stadium south of downtown Los Angeles. For at least the next six years, the Mountain West's top team will face the fifth choice from the Pac-12 in December in the home stadium of the NFL's Rams and Chargers. (AP Photo/Greg Beacham)

INGLEWOOD, Calif. (AP) — The Pac-12 and the Mountain West believe football fans around their conferences will be eager to see what's inside SoFi Stadium.

The conferences' commissioners formally announced the new LA Bowl on Wednesday at the under-construction stadium south of downtown Los Angeles. For at least the next six years, the Mountain West's top team will face the fifth choice from the Pac-12 in December at the home stadium of the NFL's Rams and Chargers.

Standing on the upper concourse of SoFi Stadium with construction work creating a constant hum around him, Pac-12 Commissioner Larry Scott looked optimistically toward a long relationship with both the cutting-edge venue and college football's newest bowl.

“When we heard the scale of what was being contemplated here, it was pretty clear right away that this was going to be a venue and an experience that would leapfrog nearly anything else in the country,” Scott said. “Given that the LA market is a home to the Pac-12, we felt that the Pac-12 should be here on a regular basis. It’s not always easy with our bowl arrangements, but I’m glad we did figure out a way to have a game here.”

The Pac-12 and Mountain West have a combined seven schools in California, and every school in both conferences does extensive recruiting in the Los Angeles area. Both conferences jumped at the chance to underline the LA market's importance to them by creating an annual showcase for two programs.

“This stadium is going to be a fantastic setting for college football,” Mountain West Commissioner Craig Thompson said. “I've visited the stadium a year ago, and I never know what to tell people. Do I talk about about the 6,000-seat theater? Is it the box seats on the floor level? The proximity to everything in LA? There are just so many things to point to. For our alumni and our fans, I don't know why you wouldn't want to come.”

Along with at least 16 NFL games every year, the multibillion-dollar venue is already slated to host the Super Bowl on Feb. 6, 2022, and the College Football Playoff championship game on Jan. 9, 2023. The Pac-12 and the Mountain West hope their fans also will be eager to see Stan Kroenke's palatial football palace just east of Los Angeles' main airport.

The Pac-12/Mountain West bowl matchup had been played annually in Las Vegas since 2001, but that bowl made big changes this year with the opening of Allegiant Stadium, the Las Vegas Raiders' new home. The Las Vegas Bowl now will match a Pac-12 team against an opponent from the SEC or the Big Ten in a post-Christmas television slot.

A date isn't firmly set for the LA Bowl, but it's expected to occur on a Saturday in December.

Organizers still haven't decided whether they'll have a title sponsor for their inaugural edition. If they do, the sponsor's name will come after the LA Bowl's name in a “Presented By” style, as with the Rose Bowl and other games.

SoFi Stadium admittedly is an enormous venue for a non-playoff bowl game, with 70,240 seats. The conferences have already thought about ways to fill as much of the arena as possible.

“We've got to be creative,” Thompson said. “Let's not overprice ourselves. Let's make it so we can get people to come and say, ‘Wow,’ and then you go back home and you sit on a wooden bleacher and think, ‘Hey, I want to go back to LA.’”

Stadium construction is proceeding at the same frenetic pace at which it has been moving for many months. Jason Gannon, the managing director of the stadium project at Hollywood Park, said 3,500 workers are on site each day.

“We're on a really tight schedule to deliver the building for July 25, yet everything remains on schedule,” Gannon said, referring to the two concerts by Taylor Swift that will open the building on July 25-26.

The NFL season will follow shortly afterward, but much of the sprawling complex around the stadium won't be completed for the Rams and Chargers, or for the LA Bowl.

The commissioners emphasized their long-term commitment to the stadium, looking forward to the years when the surrounding park areas, promenades, shopping center and hotel will be operational.

“There's always going to be something new and interesting in Los Angeles to do,” Thompson said.