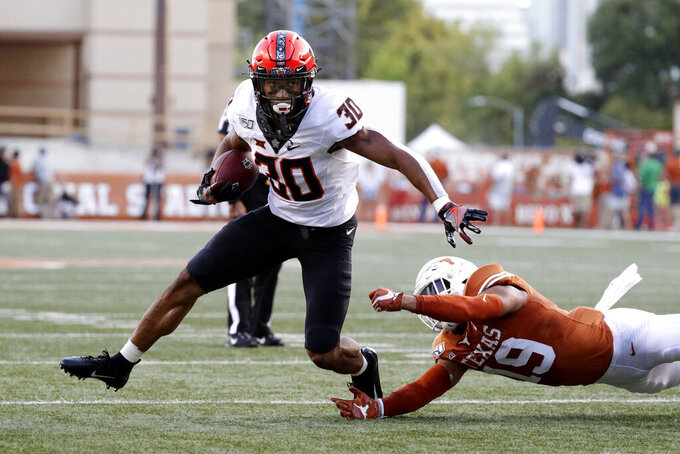 Following an impressive 31-24 victory at Mississippi State on Sept. 14, Kansas State is coming off a bye week and looking to start its conference schedule with a win in first-year coach Chris Klieman's first Big 12 matchup. Oklahoma State is hoping to rebound after a close 36-30 loss to No. 11 Texas last week.

Kansas State: QB Skylar Thompson. The Wildcats spread the ball out when rushing, but Thompson manages the offense well. After 10-of-18 passing for 123 yards against Mississippi State, including the game-winning 15-yard touchdown toss to Dalton Schoen with 5:37 remaining, Thompson has completed 67.9% of his throws this year.

Oklahoma State: Hubbard. After gaining 121 yards and two touchdowns on 37 carries last week against Texas, Hubbard leads the nation in rushing yards (642), rushing touchdowns (nine), as well as carries (103). How many times will he run the ball this week?

Of the top seven teams in the nation in third-down efficiency, five of them are from the Big 12, with Kansas State ranking fourth (22 for 38) and Oklahoma State seventh (35 of 63). . Eight of the last 12 meetings between the teams have resulted in one-possession games, including each of the last six in Stillwater, with Oklahoma State winning five of them, dating to 1999.