No. 6 Cincinnati beats No. 20 Tulsa in rainy AAC title game 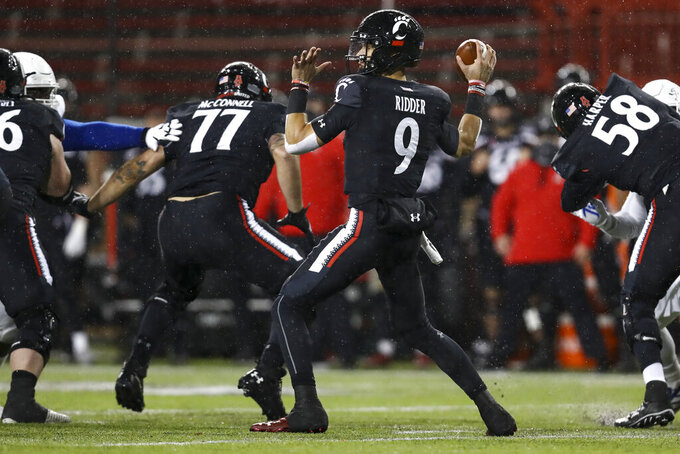 CINCINNATI (AP) — Cincinnati head coach Luke Fickell believes his team deserves a spot in the College Football Playoff. On Saturday night, his focus was on winning an American Conference championship.

“I don't want to be distracted from what we did tonight," Fickell said. "When we came in here four years ago, we said we want to play for championships. I believe this team deserves a shot.”

Cole Smith made a 34-yard field goal as time expired to give No. 6 Cincinnati a 27-24 victory over No. 20 Tulsa in the rainy AAC Championship game.

“Right now, I’m going to ride the high,” said Smith, a sophomore. “I was just thinking to put it right down the pipes. Good snap, good hold, good line to block for me.”

Alec Pierce had a career-high 146 yards receiving on five catches, Desmond Ridder passed for 269 yards and a touchdown and ran for a score, and Jerome Ford added a 42-yard scoring run for the Bearcats (9-0, No. 9 CFP).

“It's been a long time coming,” Ridder said of winning the program's first AAC title. “For this team to fight through adversity in 2020 as crazy as it is. It's something you never forget.”

Tulsa tied it with 3:41 remaining on Zach Smith's 13-yard touchdown pass to Juan Carlos Santana. But Golden Hurricane defensive tackle Jaxon Player jumped offside on a hard count on fourth-and-2, giving the Bearcats a first down at the 19 to set up Smith’s kick.

“That young man has made so many plays for us," Tulsa head coach Philip Montgomery said. "That’s just one of those plays that happens.”

The Golden Hurricane relied mostly on their running game with Smith struggling to throw in the wet conditions. He was 13 for 30 with two interceptions. Corey Taylor rushed for 106 yards and a TD.

After Jarrell White's interception ended a promising drive for Tulsa, the Bearcats went ahead 7-0 on Ford's 42-yard touchdown run. Pierce had a pair of acrobatic catches in the first quarter. He had a one-armed catch to help set up the first touchdown. His 45-yard grab led to a field goal.

“He's been a big part of this team," Ridder said. "We were able to get behind the deep safety. We can always count on big-time players to make big-time plays. That's what he did."

Player's recovery of Ridder's fumble at the Bearcats 28 set up Taylor's 10-yard TD run that tied it at 10.

Tulsa struggled to cover Pierce. He had 126 receiving yards in the first half, including a 36-yard TD catch to help Cincinnati take a 17-10 lead into halftime.

Deneric Prince's 8-yard TD run capped a 55-yard drive on Tulsa's opening possession of the third quarter, tying it at 17. Ridder scored on a 10-yard run to put the Bearcats back ahead.

The Golden Hurricane have had 16 come-from-behind wins since Montgomery took over as head coach in 2015. They nearly pulled off another.

“I couldn’t be more proud of our guys," Montgomery said. "Left it all out there on the field, made plays. We’re going to fight for 60 minutes, every second of it. We did that again tonight.”

The Bearcats were able to overcome the loss of one of their top defensive playmakers when senior safety James Wiggins left in the first quarter with a right leg injury and did not return.

Now, Cincinnati waits to see where it finishes in the College Football Playoff rankings. Fickell said the Bearcats' body of work speaks for itself.

“They’ve met every challenge that’s been thrown in front of them,” he said. “I know how much it would mean to them. You want to fight for everything you can give them. They deserve it.”

Cincinnati hadn’t played since Nov. 21 due to COVID-19 issues, and the rust showed with 12 penalties and two lost fumbles. The Bearcats had nine pre-snap penalties. “There was a 14-day pause in there where we had little contact with our guys,” Fickell said. “We had to fight through a lot of things. That's just a part of not playing for a while. We've got some things to work on.”

Tulsa (6-2, No. 23 CFP) reached the conference championship game following three straight losing seasons. It was the Golden Hurricane’s first appearance in the AAC title game. “Nobody expected us to be here," Montgomery said. "We fought a lot of adversity trying to find our way here.”

Montgomery believes the AAC has earned more respect nationally in recent years, but said it won't mean much until one of its teams reaches the playoff. “Until they let us into the party, we’re just that conference over there that plays really good football,” he said.

Tulsa and Cincinnati were scheduled to play on four previous occasions during the regular season but the game was postponed three times before being canceled altogether last week. Twice the game was moved due to COVID-19 concerns within the Bearcats program.

Tulsa: The Golden Hurricane are bowl eligible for the first time since 2016.

Cincinnati: The Bearcats have seen their hopes of becoming the first non-Power 5 team to reach the College Football Playoff fade in recent weeks. But they are in line for a New Year's Six Bowl.