No. 9 Notre Dame out to score more points with new QB, line 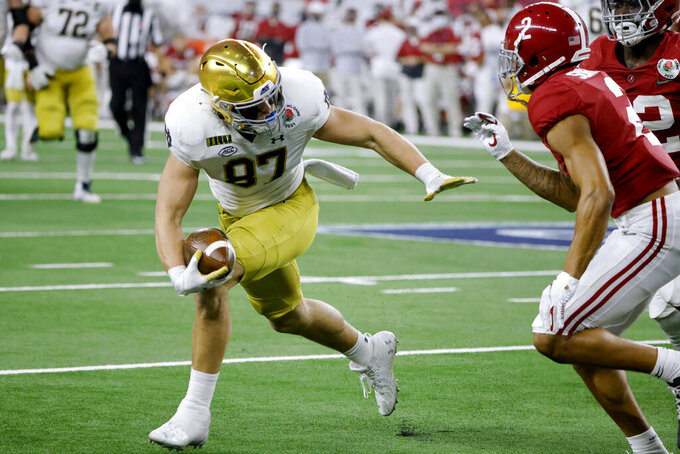 SOUTH BEND, Ind. (AP) — If No. 9 Notre Dame wants to get back — all the way back — the Fighting Irish probably will have to start scoring more points than they have in recent years.

Under coach Brian Kelly, the Irish have made two trips to the College Football Playoff and struggled each time to score enough points to be a factor in semifinal losses – 30-3 to Clemson in 2018 and 31-14 to Alabama last year.

“This offense has got to produce more points, and so you saw that we’re going to be more multiple in our offensive sets,” Kelly said. “We’ve got to get the ball downfield to our playmakers.”

The Irish offense is replacing the school’s all-time winningest quarterback, Ian Book, and six other starters, including four-fifths of the offensive line. Undaunted, Rees said he has seen the offense come together behind quarterback Jack Coan, a graduate transfer from Wisconsin, and preseason All-American candidates in running back Kyren Williams, tight end Michael Mayer, center Jarrett Patterson and guard Cain Madden, another grad transfer.

“Obviously coming into training camp there were a lot of question marks about personnel,” Rees said. “It’s been a good gel of putting all the pieces together.”

A 6-foot-4½, 307-pound senior, Patterson started 21 straight games before missing the final four in 2020 and all of spring recuperating from foot surgery. He is the anchor of a line that lost four players to the NFL with a combined 142 career starts.

Patterson’s replacements last season were 6-foot-3, 295-pound junior Zeke Correll and 6-foot-7, 305-pound grad student Josh Lugg, who have 10 career starts between them. The athletic Correll has taken over at left guard, while Lugg has moved to right tackle. The 6-foot-2½, 310-pound Madden, who brings 31 games of starting experience from Marshall, has settled in at right guard.

Blake Fisher, a 6-foot-6, 335-pound true freshman, is at left tackle, where he will protect Coan’s back.

“It’s a demanding position,” Rees said. “I think Blake’s talent is very evident the moment you see him strap on the pads. He is big – obviously (an) imposing figure – but he’s a really good athlete.”

“They’re all talented as individuals, but the offensive line is about five guys playing together as one,” Rees said. “That doesn’t happen until you have continuity up front.”

How quickly the line comes together will determine how point productive the Irish can be with Coan (3,278 yards and 23 touchdowns in 25 games for the Badgers), speedy junior Williams (1,125 rushing yards, 313 receiving yards and 14 combined TDs) and sophomore Chris Tyree (496 rushing yards) coming out of the backfield, and tight end Mayer (42 receptions for 450 yards and 2 TDs).

“I don’t mean any disrespect for any of the guys that I played with or any who have come before,” Rees said of Notre Dame’s lineage of NFL tight ends, “but Mike Mayer has the ability to be the best to ever come here.”

And once again, the Irish are loaded at the position with senior George Takacs and sophomore Kevin Bauman among Mayer’s backups.

Notre Dame is deep, too, at the wide receiver positions with seven players who have game-breaking speed. Grad captain Avery Davis is the leading returnee (24 receptions, 322 yards, 2 TDs) of the group.

“We know the talent we have,” Rees said. “Guys might have a chip on their shoulder, and they can use that to their benefit.”

The season opener is Sept. 5 at Florida State.