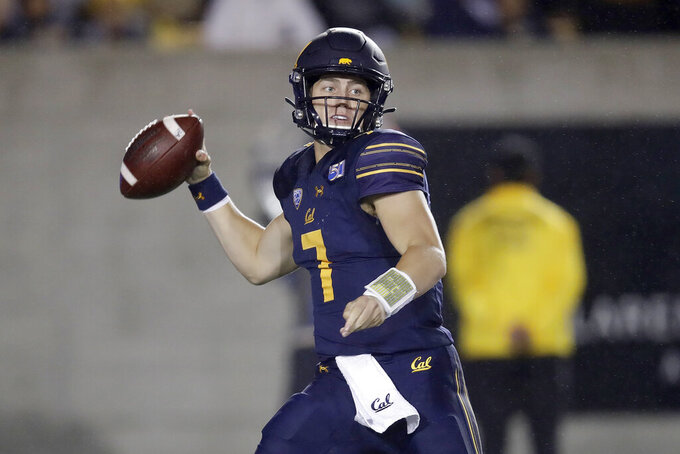 FILE - In this Sept. 27, 2019, file photo, California quarterback Chase Garbers looks to throw against Arizona State in the first half of an NCAA college football game in Berkeley, Calif. Garbers has emerged as a reliable option under center at a school that has produced its share of star quarterbacks but most recently had shined on the defensive side of the ball. (AP Photo/Ben Margot, File)

The so-called Conference of Quarterbacks has had some considerable turnover at the position heading into the season.

Arguably the top returnee is USC's Kedon Slovis, who took over last season when starter JT Daniels was injured in the opener. Slovis threw for 3,502 yards with 30 touchdowns and nine interceptions. He was named Pac-12 Freshman of the Year.

“I felt as Kedon progressed through that second half of the season and we progressed as a team, we started playing our best ball towards the end of the season last year,” Trojans coach Clay Helton said. “Now, to be able to watch Kedon work with those skill players and see the timing the ball is coming out (with), the accuracy the ball is coming out with, the chemistry of those skill players with him, it’s evident that being in the second year of the system and his comfort level with the kids he’s been working with is clear on the field. It makes you excited as a coach.”

Slovis is considered one of the top QBs in the conference, if not the nation, heading into the pandemic-abbreviated season. The Trojans, who finished 8–5 overall and 7–2 in the Pac-12 last year, are currently ranked No. 21 in the AP Top 25 despite the fact they haven't played yet.

Other returning starters at QB include Arizona State's Jayden Daniels, who threw for 2,943 yards with 17 touchdowns and two interceptions as a freshman. He had five 300-yard games. Cal's Chase Garbers threw for 1,772 yards and 14 touchdowns with three interceptions in nine games last year. And UCLA junior Dorian Thompson-Robinson threw for 2,701 yards and 21 TDs with 12 interceptions.

At Stanford, quarterback K.J. Costello went to Mississippi State under Mike Leach, who left Washington State in the offseason. But the Cardinal still have junior Davis Mills, who started in six games last season when Costello was injured and set a school record with 504 passing yards against Washington State.

At Arizona, Grant Gunnell will take the reins at QB after starting in three games last season when Tate struggled with injury.

Oregon's backup last season, Tyler Shough, is the presumed starter for the Ducks, while Tristan Gebbia is expected to top the depth chart at Oregon State. To the north in Washington, Jacob Sirmon appeared to be the frontrunner to replace Jacob Eason, and Washington State had a three-way competition in camp between Jayden de Laura, Gunner Cruz and Cammon Cooper.

As COVID-19 cases surge nationwide and more games get canceled, the Pac-12 is proceeding with caution. Oregon reported that five players had positive tests and called off a scrimmage last Saturday. The players were asymptomatic and isolated pending more accurate tests. Turned out, the initial tests were false positives and the players returned to practice Tuesday.

Among the league's coaches, Arizona's Kevin Sumlin and UCLA's Chip Kelly both had the coronavirus.

Media members who cover the Pac-12 selected Oregon to finish atop the North Division and USC to top the South, and the Ducks to win the league title for the second straight year. Last year the Ducks won their division, the championship and the Rose Bowl to finish 12-2 overall and ranked No. 5 in the final Top 25.

There are three new head coaches in the Pac-12, but one, Colorado's Karl Dorrell, isn't exactly new. He was head coach at UCLA from 2003-07. He replaces Mel Tucker, who left Boulder after one season for Michigan State.

The other two newbies are in Washington: Jimmy Lake is coach of the Huskies and Nick Rolovich has taken over the Cougars. Lake was promoted after Chris Petersen unexpectedly announced his retirement. Rolovich, who spent the last four seasons as coach at Hawaii, replaces Leach.

Ready or not, Pac-12 fans, you're about to need early Saturday wake-up calls to catch the league's 9 a.m. games. Those early starts are tough for the players, with alarms set several hours earlier for pregame meals and warmups. Many of the league's coaches weren't all that excited about the prospect — except for Utah's Kyle Whittingham, who essentially said to bring it on.

“As willing as we could possibly be. So whatever the maximum willingness level is, that’s where we’re at,” Whittingham said about the prospect of playing in those early starts. “It doesn’t bother us a bit. Our opinion has always been the sooner we get on the field, the better. It provides no advantage for either team, they’re both kicking off at the same time.”

For the Pac-12's opening weekend, USC will host Arizona State in a game starting at 9 a.m. local time.