QB, line questions haunt No. 14 Irish ahead of Hokies clash 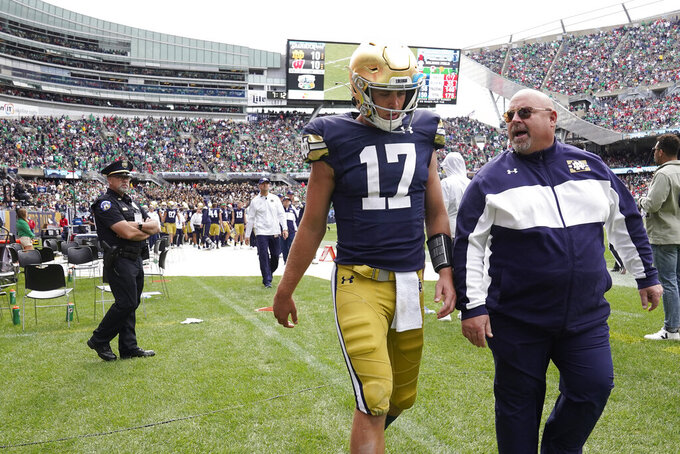 Notre Dame quarterback Jack Coan heads to the locker room after an injury during the second half of an NCAA college football game against Wisconsin Saturday, Sept. 25, 2021, in Chicago. Coan did not return to play. (AP Photo/Charles Rex Arbogast)

SOUTH BEND, Ind. (AP) — Coach Brian Kelly knows who No. 14 Notre Dame’s starting quarterback is and he doesn't plan to reveal it before Saturday’s game at Virginia Tech.

“We know exactly who it is,” Kelly said Monday. “We’re going to have one guy, and we’re going to let him know that the reps are for him to be the starter.”

None of them could really spark an offense that has been sluggish much of the season and needs to improve, starting this weekend against the Hokies (3-1).

“We feel like we’ve got a team that can win the rest of its games, and we want to be able to put the quarterback out there that we believe gives us the chance to do that,” Kelly said.

“If you really dig deep down, it’s more than just the offensive line,” Kelly said. “The ball has to come out sooner, the routes have to be run to get open (and) protection happens not just with the five but with the running backs. We just really need to coach better and put our kids in better position to succeed and our players need to play better.”

That message has been heard loud and clear by speedy sophomore Chris Tyree, who grew up in Chester, Virginia, about a 3½-hour trip from Lane Stadium.

“We have to get our juice, our swagger and our passion back,” said Tyree, who had a 96-yard kickoff return for a touchdown in a win over Wisconsin earlier this season but fumbled a kickoff return last week that the Bearcats turned into a field goal.

Tyree said he likes the energy of the 5-foot-11½, 200-pound Pyne, who threw a fourth-quarter TD pass when Coan went down with an ankle injury against Wisconsin and last Saturday brought the Irish back from a 17-0 halftime deficit by directing a pair of touchdown drives that made it 17-13 in the fourth quarter.

“Drew is a guy you get attractive to because of his personality and the energy he brings,” Tyree said. “He brings positivity to the offense. If you came out and watched practice, he’s the top three loudest people on the field.”

Pyne was just 9-of-22 passing for 143 yards and gained 10 yards on four carries, but he won over the Irish fans, who booed when he was replaced for one play by Buchner.

The 6-foot-3¼, 223-pound Coan, who transferred from Wisconsin last January, has started all five games and started strong: 26-of-35 passing for 366 yards and four touchdowns in a 41-38 overtime victory at Florida State. He has fallen off since and was just 14 of 22 for 114 yards and one interception in the first half against Cincinnati. Coan has also been sacked 20 times.

The last time Notre Dame made a significant quarterback change under Kelly came during the 2018 season. After starting 3-0 under senior Brandon Wimbush, the Irish switched to junior Ian Book, who threw for 325 yards and two touchdowns in a 56-27 victory at Wake Forest and went on to become the winningest starting quarterback in Irish history.

By Joe Reedy 46 minutes ago
By Greg Beacham an hour ago
By Ralph D. Russo 2 hrs ago
By Josh Dubow 3 hrs ago
By Cliff Brunt 3 hrs ago