Tagovailoa, No. 1 Alabama race past Missouri 39-10 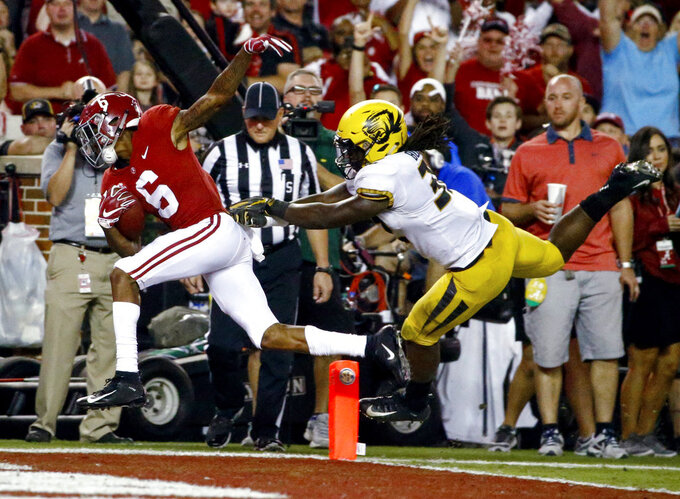 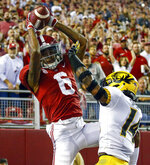 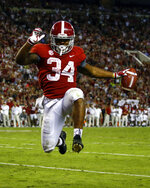 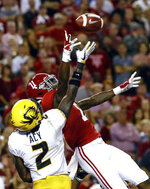 TUSCALOOSA, Ala. (AP) — Tua Tagovailoa gave Alabama a momentary scare. So did Missouri.

As usual, things turned out just fine for the top-ranked Crimson Tide.

Tagovailoa passed for 265 yards and three touchdowns but didn't return after aggravating a right knee injury in No. 1 Alabama's 39-10 victory over Missouri on Saturday night.

The Tide (7-0, 4-0 Southeastern Conference) shrugged off another would-be challenger in the league, but the star quarterback went down after sliding at the end of a run in the third quarter.

Tagovailoa went to the medical tent on the sideline after tweaking a sprained right knee. He was joined by his parents, and Jalen Hurts led the Tide the rest of the way with a big lead over the Tigers (3-3, 0-3).

The nation's top scoring offense didn't let up too much, and Tagovailoa hasn't thrown a pass in a fourth quarter yet this season anyway.

Jerry Jeudy gained 147 yards on three catches, including an 81-yard touchdown from Tagovailoa on the game's second play. DeVonta Smith had four catches for 100 yards and a touchdown before leaving with an injury after a 57-yard gain in the second quarter.

Saban said Smith pulled a muscle and could be questionable for the Tennessee game.

For a while, this was Alabama's tightest game.

"I really challenged the players for this game," Saban said. "A lot of people talk about the fact that we haven't been in a tough game, we haven't had a lot of adversity. I asked the players, 'How are you going to respond in tough situations during the game?' I think the players did a really good job of that."

Alabama had three scoring drives of less than a minute to race to a 30-10 halftime lead, starting it off with Tagovailoa's on-target deep ball to Jeudy. Drew Lock's 20-yard touchdown pass to Jalen Knox late in the first quarter cut it to 13-10 before the Tide dominated the rest of the half.

"They were definitely our biggest test so far," Alabama tailback Damien Harris said. "We knew going into this game that they were going to challenge us and all week our mind-set was how were we going to respond when things don't always go our way."

Lock was 13 of 26 for 142 yards with a touchdown. But Saivion Smith, starting in place of an injured Trevon Diggs (broken foot), intercepted his first and last passes. Lock also lost a fumble and was tackled in the end zone by Quinnen Williams for a safety to end the third quarter.

"They got rolling there in the second quarter, and they are a good football team, as good as I have ever gone against and as I have ever seen," Missouri coach Barry Odom said. "They are solid in every area."

Missouri: Made it competitive longer than most of Alabama's opponents this season. Still short-handed in the passing game but was much more competitive against No. 2 Georgia.

Alabama: Continues to produce big plays early and then pretty much coast to a win. Fell well short of its nation-leading 56 points a game. The defense fared well against one of the SEC's top offenses and had four sacks.

For the second straight game, Missouri was without top deep threat Emanuel Hall and fellow wide receiver Nate Brown. Both have groin injuries.

"This one hurts. I would say it hurts," Lock said. "You can look back and hurt all you want, you've got to keep looking forward. We've been tested like this before, we can easily bounce back and that's going to start next week."

Missouri linebacker Terez Hall was ejected for targeting in the second quarter after a hit on Damien Harris.

Alabama visits rival Tennessee, fresh from an upset of No. 21 Auburn.