Win of the Century: No. 10 Utes try to end epic skid at USC 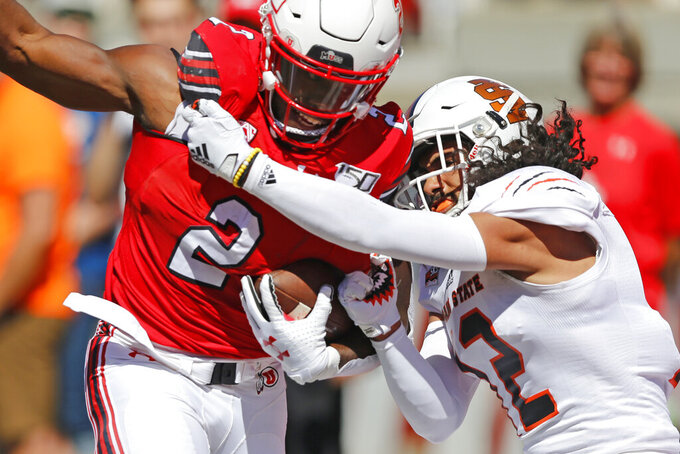 Utah running back Zack Moss (2) is tackled by Idaho State defensive back Adkin Aguirre (12) in the first half of an NCAA college football game Saturday, Sept. 14, 2019, in Salt Lake City. (AP Photo/Rick Bowmer)

LOS ANGELES (AP) — Southern California's home winning streak against Utah is older than the 96-year-old Coliseum. The last time USC lost a home game to the Utes was in 1916, when the school whose unofficial nickname had recently changed from the Methodists to the Trojans played downtown at long-gone Fiesta Park.

"I guess everyone is entitled to a bad decade — or a bad century," laughed Kyle Whittingham, the Utah coach for only four of those eight defeats. "History hasn't been good to us in that place. But that doesn't have any bearing on this year."

Indeed, No. 10 Utah seems primed for a victory Friday night that could set a tone for a new century of a rivalry that has picked up ample steam in recent years. The Utes (3-0) return to the Coliseum with a chance to establish themselves firmly as the favorite for a second straight Pac-12 South title by beating the conference's highest-profile team at home.

After an embarrassing loss to BYU last week, USC (2-1, 1-0 Pac-12) comes in with the chance to set its season back on a solid course. It the Trojans can't do it against the preseason division favorites, coach Clay Helton's departure could move a bit closer.

"I think this is a defining game for us, totally," USC defensive end Christian Rector said. "In history, it's either Utah or USC from the Pac-12 South who usually goes up north (for the conference title game). So yeah, this game does mean a lot for us, and we knew that coming into the season."

The Utes' consistency in their 3-0 start reflects their steady competence under Whittingham for the past 15 years, while USC's roller coaster beginning to this season is a good approximation of the tumult and chaos that the Trojans' program has embodied for the past decade.

Both teams' fortunes could turn on the performance of USC freshman quarterback Kedon Slovis. He passed for 377 yards and three touchdowns in his first career start against Stanford, but he followed it up by throwing three interceptions, including the game-ending overtime pick, in Provo.

"I was guessing on some of the reads, and not being as disciplined as I should have been," Slovis said. "Coach made that clear, and it was apparent to me. Just got to work to get better."

"We know that (Slovis) is going to try to bounce back this week against us," Utah defensive tackle Leki Fotu said. "We're going to use that to our advantage, where he's at right now. I'm not sure if he's too confident right now after that game (against BYU)."

Here are more things to know about the Utes' trip to LA:

Zack Moss has racked up 371 yards rushing in his three career games against USC, and the tireless senior has an outside shot to break Utah's career yards rushing record at the Coliseum. With 3,024 yards that put him fifth among all active FBS players, Moss is 195 yards behind 1980s star Eddie Johnson (3,219) for the school record. Moss is also just four rushing touchdowns behind Del Rodgers' school-record 31.

Utah QB Tyler Huntley has completed a whopping 78% of his passes, and Utah hasn't given up a sack or thrown an interception this season. Utes fans aren't used to seeing this type of merciless efficiency, and Huntley is impressing with his legs as well as his arm. "There were a handful of times where a quarterback not as athletic as Tyler would have gone down," Whittingham said. Huntley challenges USC's defense, which hasn't faced a top-shelf quarterback yet this season — in fact, two of their three opposing QBs were making their first career starts.

USC is loaded with talented skill players, including a trio of talented receivers — Michael Pittman Jr., Amon-Ra St. Brown and Tyler Vaughns — that Whittingham called "maybe the best in the country, as far as sheer ability." Coordinator Graham Harrell's Air Raid offense presents a challenge for Utah, but Harrell patiently tried to run the ball last week when BYU dropped eight defenders and dared Slovis to pick them apart. Slovis' first two interceptions led to 10 points, and the third ended the game in overtime.

USC has only hosted three Friday games in the 21st century, partly because it's not ideal for fans to get downtown in end-of-the-week Los Angeles traffic. USC actually hosted Utah on a Friday in September 1948. That game was also the Trojans' first televised game from the Coliseum and their first televised regular season game ever.

Whittingham brought up an interesting stat when he noted that the Utes have played the fewest snaps of any team in the Pac-12 through three games. "There's less wear and tear, and that's one of the benefits of not playing fast," Whittingham said. "That's something that matters." He believes that relative rest has kept the Utes fresh for this short week of preparation, particularly after his starters played scarcely more than a half against Idaho State last week. The Trojans are trying to play quickly in their new Air Raid offense, but they've avoided most major injuries so far.