ACC dominator: Next stop Virginia for No. 7 Notre Dame 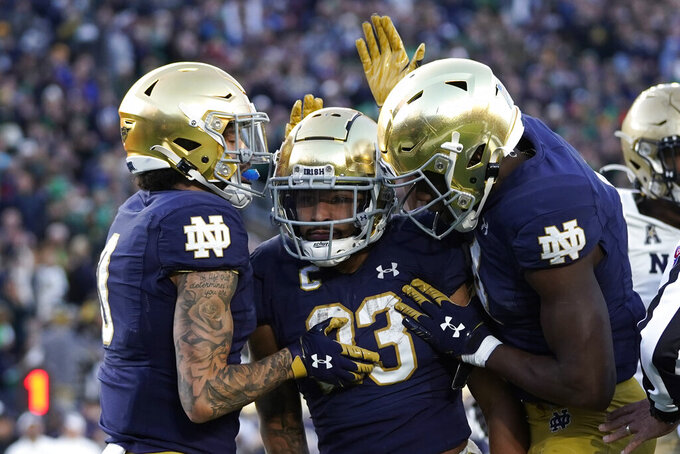 Line: Notre Dame by 5 1/2, according to FanDuel Sportsbook.

The Fighting Irish are hoping that tough matchups will vault them into the College Football Playoff. The Cavaliers have nothing to lose but status as they prepare for their last two games that could win them the ACC Coastal Division.

Virginia's quarterback against the Fighting Irish defense. Cavaliers coach Bronco Mendenhall was coy this week about whether Brennan Armstrong, the national leader with more than 425 yards per game, would play after sustaining a rib injury in a loss to BYU. He's been key to the Cavaliers' pass-happy offense, and his absence would likely change their game plan.

Notre Dame: RB Kyren Williams is a threat running and catching, especially when the Irish swap QBs to give a different look. He's had more than 800 yards rushing and 30 catches in his last four games — one of five FBS RBs to do that — and has run for touchdowns in two of his last three games.

Virginia: At 6-foot-7 and almost 260 pounds, TE Jelani Woods has been a blocking and pass-catching bulldozer for the Cavaliers. The graduate transfer from Oklahoma State has 29 catches for 446 yards and six touchdowns.

The Fighting Irish play five games a season against ACC teams and are 3-0 so far, having beaten Florida State, Virginia Tech and North Carolina. ... The Cavaliers are the sixth team coming off a bye week to face Notre Dame. The Irish are 4-1 in the first five. ... The Irish have won 10 straight road games against ACC foes and 22 straight regular season games against ACC foes overall. ... The Cavaliers have played two ranked teams this season and allowed at least 59 points in losses to both. ... Virginia hasn't beaten a team ranked in the top 10 since it beat No. 4 Florida State 26-21 in 2005. ... Virginia has produced more than 500 yards of offense in all but one game.