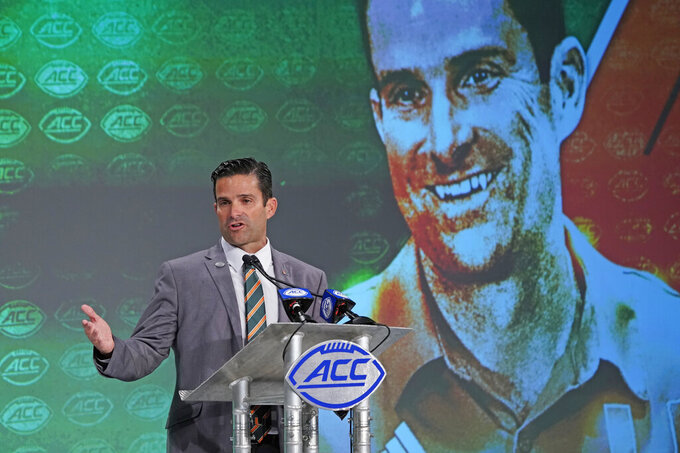 CHARLOTTE, N.C. (AP) — Pittsburgh coach Pat Narduzzi had a good idea what to expect over the past two seasons from every opponent in the Atlantic Coast Conference's Coastal Division.

After two years with the same seven head coaches, nearly half of that group is gone with Georgia Tech, Miami and North Carolina bringing in new head coaches. Now the reigning division champion Panthers — along with Duke Virginia and Virginia Tech — will face a new set of schemes and coaching tendencies.

"You can watch tape and see what they'd like to do, but really it's what are they going like to do against your defensive front, your coverage — how are they going to defend your formations?" Narduzzi said Thursday during the league's preseason media days. . Those are a lot of things you don't know going into the first season, so that does change things a bit."

The arrivals of Georgia Tech's Geoff Collins, Miami's Manny Diaz and UNC's Mack Brown marks the second time in four seasons that the Coastal Division will enter a season with three new coaches. It last happened in 2016, which was followed by two turnover-free seasons.

The timing seems fitting, too, considering the Coastal Division is as unpredictable as it gets. There's been a different champion for each of the past six years — and now there's a different set of blueprints for the Yellow Jackets, Hurricanes and Tar Heels.

That change is most glaring at Georgia Tech on offense.

Paul Johnson retired after 11 seasons running a run-heavy triple-option scheme. Now Collins is taking over after two seasons at Temple and has said he would install "NFL-based" schemes, though he'll have to adapt a roster full of players recruited to the option attack to do it.

Some of that work went on in the spring, with players experimenting with different positions. For 6-foot-2, 220-pound receiver Jalen Camp, that meant getting some defensive reps as a third-down pass rusher.

"He does that with a lot of different guys," Camp said. "If he feels this guy may help us in a separate area, then he's definitely going to try that guy out and see how he fits."

It's no surprise, then, that Collins spent part of Thursday touting the importance of "position flexibility."

There will also be significant change for the Tar Heels, who moved on from Larry Fedora and brought back Brown for a second stint in Chapel Hill. The 67-year-old College Football Hall of Fame member is hoping to repeat the success from his first decade-long run, when he built a top-10 program before leaving for Texas in 1997.

"Your first difficulty is to get the players to trust you because they just lost their coach," Brown said. "They've had two tough seasons, and here comes this new guy that's been out of coaching for five years. . So you've got to get them to buy in. You've got to communicate with them and then the trust and respect has to build up. I think we've got all that."

The changes might be less dramatic with Miami, where Diaz spent three years as defensive coordinator under Mark Richt. Diaz was introduced as Collins' successor at Temple before Richt's unexpected retirement led him back to the Hurricanes.

Diaz's unit ranked as the nation's fourth-ranked total defense and returns nearly all of its front seven, but Diaz overhauled the offensive staff to provide that unit with a jolt as a top priority.

"From the inside, you're able to diagnose the patient a little bit easier, right?" Diaz said. "When a head coach normally comes in, you're going to hear the same 'my culture, my way and whatever problems were there I'm going to fix it.' And sometimes the baby can get thrown out with the bath water. ... I had the unique situation to know the locker room, to know the coaching staff, to know the administration — and to know what we sort of stumbling on."