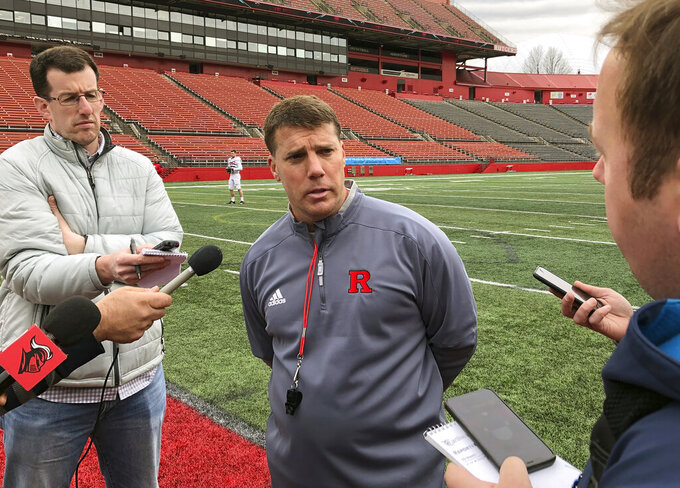 There's much to be decided as the Scarlet Knights get ready for Saturday's annual spring football game. Jobs are opens, not everybody is on campus and injuries will happen before the season opener Aug. 30 at home against Massachusetts.

"I can't say we are better than anything yet, until we go play a game," Ash said Thursday. "I do like our team a lot. I've said that several times. I really like the culture we have right now, but to say that we are better as a team right now, I am going to hold off making any predictions or judgments until we actually play games."

There is little doubt Rutgers has a long way to go after going 0-9 in the Big Ten Conference. It lost its final 11 games overall and 12 starters won't be back. The defense lost eight starters so new coordinator Andy Buh will be trying to mesh new pieces.

Offensive coordinator John McNulty will be back for a second season. Quarterback Art Sitkowski, who was inconsistent in his freshman season, is the favorite to run the offense again. His top weapons will by halfbacks Raheem Blackshear and Isaih Pacheco. The offensive line is a question mark with the loss of Tariq Cole and the decision by Jonah Jackson to transfer.

One new look on offense will be Johnathan Lewis making the move from backup quarterback to tight end. He has the skill to play the position but his blocking must improve.

"We hope to have a great turnout and give fans a glimpse of what the 2019 Scarlet Knights are going to look like," said Ash, who has a 7-29 record in three seasons. "We feel really good about how we've progressed here during spring."

Ash said Saturday's game would be a mixture of tackling on some plays and bumping and thudding on others. He wants the players to take a game-day focus and simply execute with fans watching. He wants touchdowns from his offense and takeaways from the defense.

"I won't give away any secrets," Ash said. "We're not too creative around here. We're just trying to get better and focus on getting another good day's work in on Saturday and see guys go out and perform, and do their jobs."