Allen carries No. 19 Wisconsin to 35-28 win over Nebraska 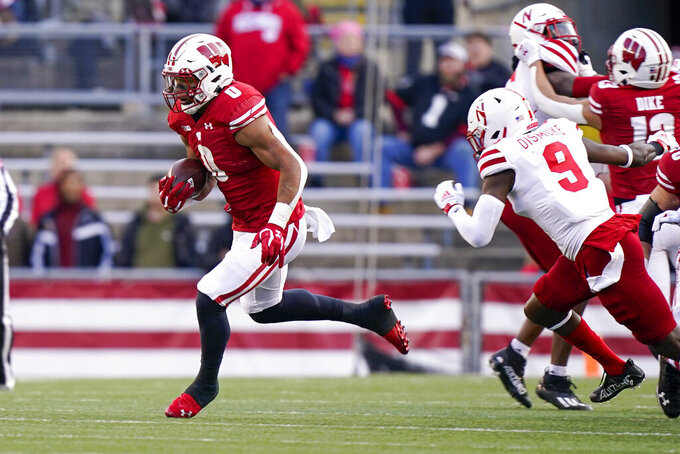 Wisconsin running back Braelon Allen (0) breaks away for a touchdown run against Nebraska safety Marquel Dismuke (9) during the first half of an NCAA college football game Saturday, Nov. 20, 2021, in Madison, Wis. (AP Photo/Andy Manis)

Allen rushed for 228 yards and three touchdowns – including a tiebreaking 53-yarder with 3:50 remaining – to help No. 19 Wisconsin outlast Nebraska 35-28 for its seventh consecutive victory Saturday.

Wisconsin has beaten Nebraska eight straight times and typically has done it with dominant rushing performances, starting with the night when Melvin Gordon and Montee Ball each ran for over 200 yards in the 2012 Big Ten championship game. Gordon rushed for a school-record 408 yards against Nebraska in 2014. Jonathan Taylor exceeded 200 yards against Nebraska three separate times.

“All week I heard about the yards and touchdowns that we have put up on Nebraska every year,” Allen said. “It’s cool to kind of continue the tradition.”

Wisconsin will clinch its fourth Big Ten championship game appearance in the last six years if it wins its regular-season finale at Minnesota. Wisconsin is tied with No. 18 Iowa for first place in the West but owns the tiebreaker advantage because it beat the Hawkeyes 27-7 on Oct. 30.

The Badgers kept their winning streak alive Saturday because Allen was spectacular on a day when their top-ranked defense wasn’t as effective as usual.

Allen's performance came with Gordon watching as an honorary captain. Allen, who considers the Denver Broncos running back an idol and an inspiration, said it was surreal to shake his hand and talk to him before the game.

“It started with the 408 against Nebraska,” Allen said. “At the time, I was just finishing up my fifth-grade season. I honestly didn’t know if I even liked football at that point. I saw that game and that’s kind of what sparked it all for me, trying to be like him one day.”

Allen, who had 22 carries, has rushed for over 100 yards in each of Wisconsin’s last seven games. The 17-year-old had totaled 12 carries during Wisconsin’s 1-3 start.

He has rushed for a total of 401 yards and six touchdowns in the two games since fellow running back Chez Mellusi suffered a season-ending knee injury. Mellusi was Wisconsin’s leading rusher at the time he got hurt.

“He wants to do it for the guy next to him,” offensive tackle Tyler Beach said. “I think that’s where his maturity is right now. It’s on a whole different level for a guy as young as he is.”

He had a career-long 71-yard touchdown in the first quarter and a 3-yard score late in the third quarter. After Nebraska tied the game with 6:27 left in the game on Marvin Scott’s 3-yard touchdown, Allen put Wisconsin ahead again with one more breakaway.

Allen went through the right side of the line, headed toward the sideline and easily shed safety Myles Farmer’s tackle attempt inside the 30.

“He’s a special guy,” Nebraska defensive end Garrett Nelson said. “He’s going to be a problem for the Big Ten for a long time.”

The Cornhuskers drove to Wisconsin’s 11-yard line in the final minute but ended up losing the ball on downs at the 21.

Nebraska coach Scott Frost received an unsportsmanlike conduct penalty after the fourth-down incompletion, apparently believing Hicks made contact with the receiver before the throw arrived.

“I didn’t get an explanation,” Frost said. “I was too angry to ask for one.”

Nebraska: In its first game since Frost fired four offensive assistants, the Cornhuskers gained 452 yards, including 143 yards in receptions by Austin Allen, a school record for tight ends. The Huskers' total was the highest this season against Wisconsin’s top-ranked defense. But it still added up to one more close loss against a quality team. “We had a really good game plan, and the team executed it well,” Frost said. “We kind of stopped ourselves as much as we got stopped.”

Nebraska is 5-19 in one-score games in Frost's four seasons.

Wisconsin: The Badgers had three scoreless trips inside Nebraska’s 35-yard line but still showed their offense is good enough to win games when their defense isn’t dominant.

Wisconsin could move up a few spots but probably won’t get into the top 15.