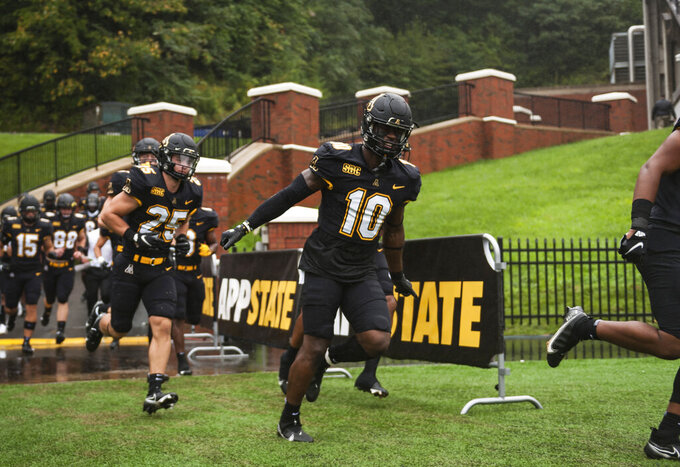 Appalachian State football players make their entrance to the field prior to an NCAA college football game against UNC-Charlotte on Saturday, Sept. 12, 2020, in Boone, N.C. (Allison Lee Isley/The Winston-Salem Journal via AP)

Sun Belt rivals Louisiana-Lafayette and Appalachian State were among 10 new teams ranked Sunday in first regular-season Associated Press college football poll, which was stripped of the teams not yet scheduled to play a fall season.

There was no change at the very top: Preseason No. 1 Clemson received 60 of 61 first place-votes this week.

After all Division I teams were eligible to be voted on for the preseason Top 25, the panel of 61 voters was permitted to consider only the 60% of Football Bowl Subdivision teams scheduled to play in the fall now that the season has started.

That meant preseason No. 2 Ohio State, No. 7 Penn State and No. 9 Oregon, along with six other Big Ten and Pac-12 teams, dropped out of the rankings. The Big Ten, Pac-12, Mid-American Conference and Mountain West have delayed their seasons due to concerns about playing amid the coronavirus pandemic, but the Big Ten is taking some steps toward a possible mid-October start.

With those teams gone, Alabama moved up to No. 2. Oklahoma is No. 3, followed by No. 4 Georgia and No. 5 Florida. Defending champion LSU, with one first-place vote, is No. 6.

The Sun Belt Conference has two teams ranked for the first time since the conference began sponsoring football in 2001, with Louisiana-Lafayette at No. 19 and Appalachian State at No. 24.

The Ragin' Cajuns pulled off maybe the biggest upset of the weekend, winning at Iowa State 31-14 on Saturday. The Cyclones had been ranked No. 23 and are the one team currently scheduled to play to fall out of the rankings after being in the preseason Top 25.

Louisiana-Lafayette was last ranked in 1943.

The rest of the newcomers to the Top 25:

— No. 16 Memphis has the highest ranking of those teams entering the poll. Not surprising. The Tigers were first among the others receiving votes in the preseason poll and opened the season by beating Arkansas State last week. That same Arkansas State then turned around and upset Kansas State on the road Saturday. The Tigers might have to sit on that ranking for a little while. Players being sidelined by positive COVID-19 tests and related quarantines forced the postponement of Memphis' game Friday against Houston.

— No. 17 Miami also garnered some support in the preseason. The Hurricanes join on the strength of a 31-14 victory Thursday against Conference USA contender UAB.

— No. 20 Virginia Tech has already had two games postponed. The Hokies were supposed to open their season Saturday against North Carolina State, but the Wolfpack's preparation for the season was delayed by a COVID-19 outbreak. Now Virginia Tech is dealing with coronavirus issues of its own and its game next week against Virginia has been postponed.

— No. 21 BYU opened the season on Labor Day, beating Navy 55-3. But the Cougars' next game has been postponed because of positive COVID-19 cases among the players.

— No. 23 Kentucky is scheduled to start the season Sept. 26, along with the rest of the SEC.

— No. 25 Pitt opened the season by beating Austin Peay 55-0 in a game that was shortened in the second half. With the Panthers up 42-0 halftime, the teams agreed to play 10-minute quarters.

Just one as the SEC still sits idle. BYU at Army would have qualified but for the postponement.

No. 17 Miami at No. 18 Louisville. Two of teams that benefited from solid openers against C-USA teams. Louisville's Micale Cunningham and Miami's D'Eriq King make for an exciting quarterback matchup.