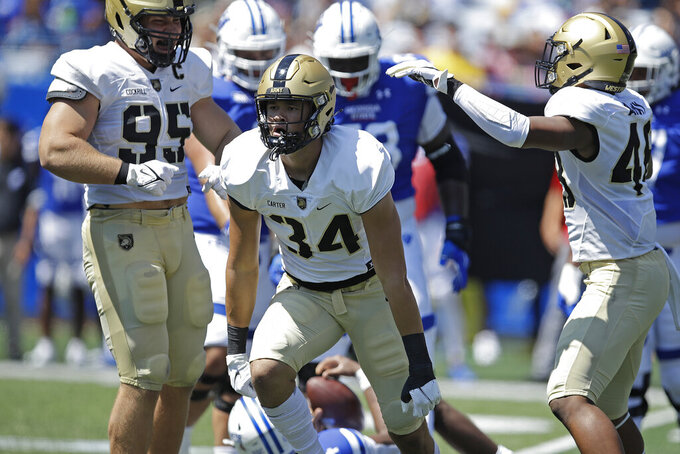 When the archrivals meet Saturday for the 122nd time, the Navy offense will be keeping close watch on the junior from Missouri City, Texas. At 6-foot-7 and 250 pounds, Carter has been easy to spot in his first full season as a starter because he's been showing up in the backfield an awful lot. He leads the nation with 1.32 sacks per game and has 14.5 in 11 games, 13 of them solo (Will Anderson Jr. of Alabama has one more sack but has played in two more games).

“I’m not surprised that I’m having success just because I know the work that I put in, but I will say that coming in my goal was to get double-digit sacks by the end of the season," said Carter, who mostly was a tight end in high school. "To see that amount of success is definitely been a little surprising to me.”

Carter also has forced four fumbles, snared one interception and blocked a kick. It's a résumé West Point hopes will garner All-America status.

“I’m glad he’s on my side,” Army coach Jeff Monken said. “We’re fortunate to have him here.”

“We knew that he could be very special the day he stepped foot” on campus, senior defensive back Cedrick Cunningham said. "He was a tall, skinny kid when he first got here. Now, it’s awesome to see how much he’s grown as a player on and off the field. When you see a guy with the work ethic like he has, you just know that he’s going to have a chance.”

A chance was all that Carter wanted, and his road to West Point was about as circuitous as it could be. The family moved from California to the Houston area the summer before his junior year of high school. He transferred to a private school and missed much of his senior year with an injury.

With not much traction in recruiting, his mother, Melissa, started searching for a prep school to give Carter another year to develop. The family decided on Cheshire Academy in Connecticut after speaking with coach David Dykeman, who needed help on defense.

“He came here as a guy who had never played defense and really embraced the opportunity," Dykeman said. "He had a strip sack he took back for 97 yards. Things that he did were just phenomenal. He was driven.”

Army, just 90 miles away, came calling first with an offer after linebackers coach John Loose got a first-hand look at Carter, who didn’t know much about West Point but thought it made perfect sense. He'd have a chance to play college football at the highest level, get a first-rate education and be able to serve his country after graduation.

“I think he likes that they’re pretty down-to-earth," his mother said. "And I think he really respects coach Monken and his program.”

Carter didn't play his freshman year but made his presence felt in practice.

“He’s a turnover-making machine, to be honest,” offensive coordinator Brent Davis said. "He’s so sudden and so long you really don’t know exactly what you’re going to get. It makes it difficult. He used to do that to us all the time when he was on the scout team. He was a pain in the butt.”

Carter played in 10 of Army's 12 games last season, mostly coming in on third down until logging two starts. Against Georgia Southern in late November he gave a glimpse of what was to come, registering a sack, an interception, a forced fumble and a blocked kick.

“He only got one sack last year, but he was still a disruptive player for us,” defensive coordinator Nate Woody said. ”If you could just come out and look in practice at his work ethic, it’s amazing the mental preparation that he puts in for practice and for games."

Carter began this season with three sacks against Georgia Southern and had a strip sack at Wisconsin that the offense was unable to convert in a tight game. In an overtime victory over Air Force with the Commander-in-Chief's Trophy on the line, Carter had one sack among his two tackles for loss, one quarterback hurry and an impressive pass breakup along the sideline deep in Army territory that deflected to teammate Cameron Jones, who returned it 45 yards.

“He stands out," Wisconsin coach Paul Chryst said. “He’s talented and the effort that he plays with — that’s a really good combination.”

Now comes the big game against Navy at MetLife Stadium in East Rutherford, New Jersey, and another chance to wreak some havoc.

“He’s excited about it. That’s what gets me excited about it," Carter's father said. ”He’s now become his own man and you can’t be anything but proud. That’s just on a whole different level proud, no matter what he does from this day forward. I let him know how proud I am of him because he’s doing some remarkable stuff that in your wildest dreams you couldn’t imagine.”