Bielema boost: No. 24 Illini ahead of schedule in year two 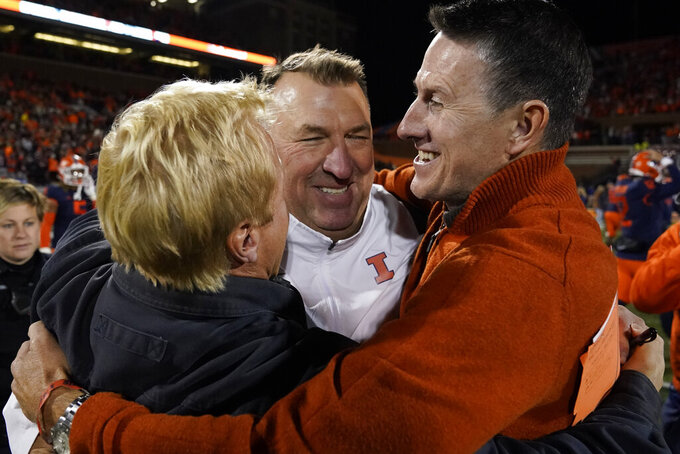 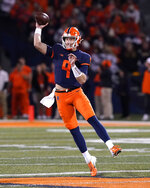 Bret Bielema suddenly has No. 24 Illinois looking like a Big Ten West contender in his second year since replacing Lovie Smith as the Illini’s coach.

Bielema is no stranger to success in the Big Ten. He led Wisconsin to three consecutive conference titles and Rose Bowls before departing for seemingly greener pastures at Arkansas in the Southeastern Conference.

The 52-year-old Bielema has changed since his days as a hotshot coaching prospect in Madison. He is perhaps wiser after spending five years and going 29-34 with the Razorbacks before being fired in 2017.

“I think I draw on all the time from my experiences,” he said earlier this week.

Champaign could be seeing the best version of Bielema. Early results indicate he may be taking the Illini (5-1, 2-1 Big Ten) from Big Ten afterthought to a formidable contender in the wide open West Division.

“I think our guys are extremely hungry,” Bielema said. “They’re fun to be around. I don’t know if I’ve enjoyed coaching either before the game, during the game or after the game as much as I have (with) this group.”

He and up-and-coming defensive coordinator Ryan Walters wasted no time turning an occasional leaky defense under Smith into a unit that allows an FBS-best 3.72 yards per play and the fewest points per game (8).

A once listless offense has turned into a productive unit behind FBS-leading rusher Chase Brown (879 yards) and transfer quarterback Tommy DeVito.

When healthy, DeVito is a quality decision-maker in addition to having a talented and accurate arm. An ankle injury he sustained in the 9-6 win over Iowa last week could limit this team, but the running game may well continue to dominate after Brown put up 146 yards against a rock-solid Iowa front.

“Sometimes you’ve got to win things in ways that you don’t plan,” Bielema said.

Already, the Illini are a win away from bowl eligibility. That feat is particularly impressive considering it took Smith four years to reach a bowl and that Illinois has only made six bowls this millennium.

Ron Zook got the Illini off to a 6-0 start in 2011, the program's last seven-win season, before stumbling out of the rankings with six-straight losses and getting fired before a win over UCLA in the Kraft Fight Hunger Bowl.

But this start feels sustainable.

“When that (No. 24 ranking) came through, I literally just sat there for a moment and kind of digested it and thought about it, thought it was a good thing," Bielema said. "I grew up and played for coach (Hayden) Fry (at Iowa). Coach Fry used to always say, ‘Partner, if you’ve done it, you ain’t bragging.’”

The program's upward mobility in the Big Ten West since Bielema's arrival — especially after Smith went 4-26 against the division — comes as programs like Wisconsin and Iowa idle or regress.

Whether Bielema can now turn on-field improvement into wins on the recruiting trail will also be pivotal.

Smith did not leave the cupboard bare, but much of the remaining talent is in its final year of eligibility or may depart to the NFL this spring.

“That's why I want to ride this wave as long and as high as we possibly can, because it will definitely help us in the future.”

He credits his players, most of them Smith recruits who could have darted after either of the last two seasons. Offensive lineman Alex Palczewski and safety Kendall Smith, both sixth-year players, are contributors who bought into his vision instead of leaving.

“Like a year ago, I was worried guys might bail," Bielema said. "They had trust and faith in us.”