Brown takes on a 2nd rebuilding job at North Carolina 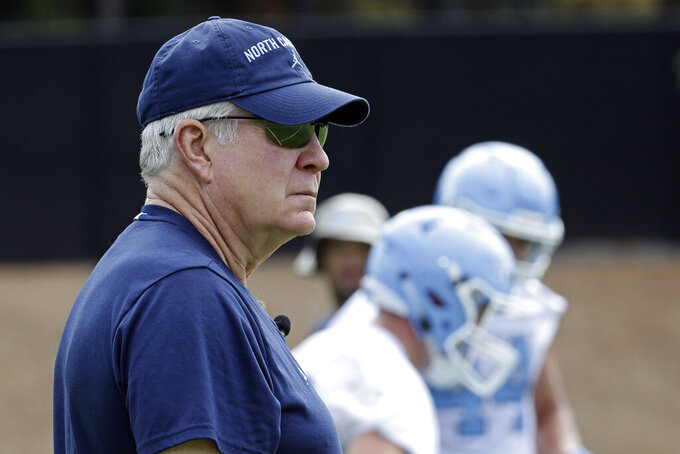 CHAPEL HILL, N.C. (AP) — Mack Brown knows one of his first tasks is getting North Carolina to play with confidence again.

The College Football Hall of Fame member is back in a second stint leading the Tar Heels, this time trying to turn around a program that went from contending in the Atlantic Coast Conference division race to the bottom of the league in a stunningly swift fall under Larry Fedora. The Tar Heels are hoping Brown's experienced touch changes that trajectory.

Brown knows it's on his players' minds, too, considering the questions he heard from some of them after the first practice of preseason camp.

He said some "of them when they were leaving said, 'What do you think? Better? Are we better?' So there's still some of that being unsure about who we are. I said, 'We're absolutely better.' I told them that: we're better in shorts, we've got to be better in pads."

Brown first coached here from 1988-97 building up a program that went from 2-20 in his first two seasons to top-10 national rankings in his final two seasons before his departure for Texas. He spent 16 seasons there and won the national championship for the 2005 season, and has worked in broadcasting since his 2013 exit from there.

He's taking over a program that went from playing in the ACC championship game in 2015 to going a league-worst 2-14 in the league over the past two seasons, two games worse than any other team. Many of those losses have come by close margins — the Tar Heels squandered fourth-quarter leads against three bowl teams last year — to add extra frustration.

"It's a brand new fresh slate," defensive lineman Aaron Crawford said. "That's just kind of how we're going to approach it. The confidence we need to build is simply for this team — not because of what we've gone through, just because of where we need to go."

Some other things to know about North Carolina for the 2019 season:

The biggest storyline in camp is the three-way battle to become UNC's starting quarterback.

Redshirt freshmen Cade Fortin and Jace Ruder — who saw some action last year but were limited by injuries — are in the mix along with true freshman Sam Howell, who flipped his commitment from Florida State to UNC in December for an early recruiting win for Brown's new staff. Brown has said there's no timeline for naming a starter.

Running back is a clear strength with Michael Carter, Antonio Williams and Javonte Williams all back after combining to average 6.1 yards per carry in 2018. Brown said running back has been the Tar Heels' best position group in spring and to start preseason camp.

North Carolina's defense has a talented pair to build around up front in defensive linemen Jason Strowbridge and Aaron Crawford.

The 6-foot-5, 285-pound Strowbridge has started 20 games the past two seasons, though he missed spring practices with an injury. The 6-2, 290-pound Crawford played just two games last year while dealing with an injury suffered in preseason camp.

"They're kind of the kingpins of our front," Brown said. "We need to stop the run better and they're a key part of that."

The Tar Heels have lost 21 of 27 games since November 2016, including 16 of 18 against the ACC, and have had little success against their power-conference peers. The only wins against power-conference opponents both came against Coastal Division foe Pittsburgh in each of the past two seasons, with the other four wins coming against Western Carolina (twice), The Citadel and Old Dominion.

UNC can't ease Brown into his return to coaching.

The Tar Heels open against South Carolina of the Southeastern Conference in Charlotte on Aug. 31, with the Tar Heels looking for their first season-opening win against a power-conference opponent since beating Indiana in Brown's final season here in 1997. They next face Miami, Wake Forest and Appalachian State — all bowl teams last year — before a visit from reigning national champion and four-time league champ Clemson.

How well the Tar Heels handle that difficult stretch could determine whether they contend for a bowl bid.