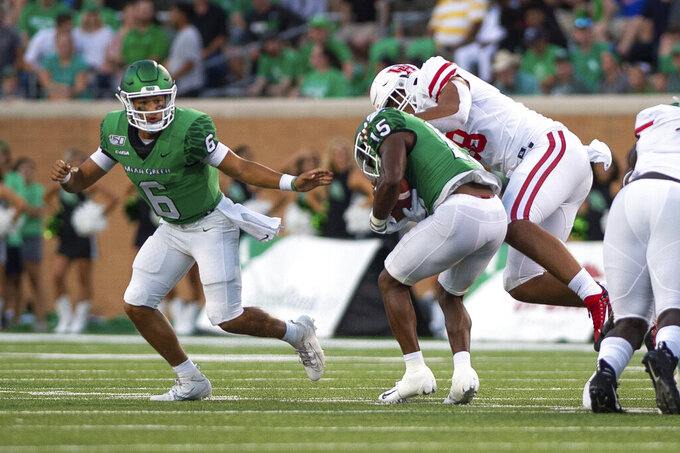 North Texas quarterback Mason Fine (6) passes to running back Tre Siggers (15) during the first half of an NCAA college game against Houston on Saturday, Sept. 28, 2019, in Denton, Texas. (Kara Dry/The Denton Record-Chronicle via AP)

DENTON, Texas (AP) — Patrick Carr ran for 139 yards and three touchdowns to lead Houston to a 46-25 victory over North Texas on Saturday night.

Houston (2-3), which rebounded from consecutive seven-point losses, is off until the Cougars play host to Cincinnati on Oct. 12 to open American Athletic Conference play.

Carr, who surpassed the 1,000-yard career rushing mark in a 38-31 loss at Tulane on Sept. 19, broke loose on a 68-yard touchdown run with his first carry of the game. He added scoring runs from 2 and 12 yards in the second half.

Clayton Tune tossed a 12-yard touchdown pass to Courtney Lark in the first quarter for the Cougars. In the second half, Marquez Stevenson scored on an 82-yard kickoff return, the first Cougar to score on a kickoff since 2016. Bryson Smith added a 60-yard punt return for a touchdown.

Mason Fine was 35-of-55 passing for 353 yards with a pair of touchdown passes for North Texas (2-3). The Mean Green return to Conference USA play at Southern Mississippi on Saturday.