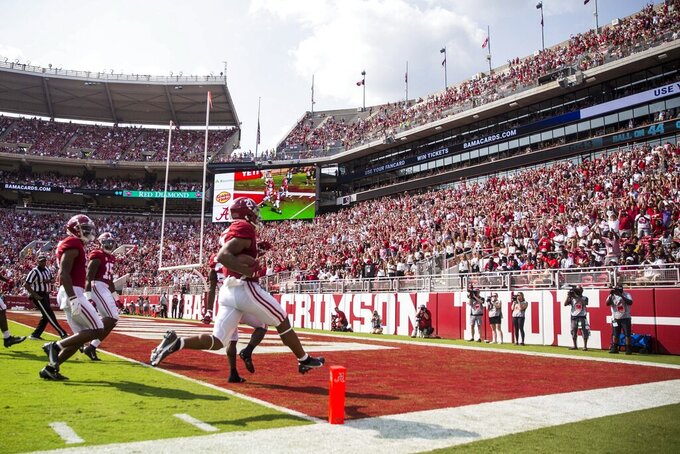 Alabama running back Jase McClellan (21) returns a blocked punt for a touchdown against Mercer during the first half of an NCAA college football game, Saturday, Sept. 11, 2021, in Tuscaloosa, Ala. (AP Photo/Vasha Hunt)

The road to a new format for deciding major college football's national champion took a detour Wednesday when the CFP management committee — 10 conference commissioners and Notre Dame's athletic director — was unable to come to a consensus on the proposed 12-team format.

Instead of teeing up the university presidents who have the final say for a vote next week in Chicago, members of the committee circled back on the possibility of an eight-team playoff and discussed other issues.

They are set to reconvene in Chicago, with the presidents joining via Zoom, for what CFP Executive Director Bill Hancock called an “informational" meeting.

“It’s not behind,” Mountain West Commissioner Craig Thompson said. "This was the natural course of action for this process.

Odds are still on the CFP expanding. Everybody involved would prefer that. But to get there, compromises will need to be made.

The 12-team proposal publicly unveiled in June is still very much in play and probably still the favorite to pass.

Of course, it's not as simple as eight or 12. How the teams are chosen makes a huge difference. Automatic bids for conference champions or nothing but at-large spots?

How soon a new format could be implemented is tied directly to television rights. ESPN owns the playoff through 2025. Having multiple network partners is likely to increase the overall value, but whether that can happen before the end of the current deal is unclear.

Then there is the Rose Bowl, one of the most valuable properties in sports. Think of the Rose Bowl as a winter vacation spot with a mountain view in Southern California that the Big Ten and Pac-12 are not eager to share any more than they already do.

“I am concerned that if everyone brings their Christmas list to the meeting and has to have everything on their Christmas list, we'll have an unhappy Christmas morning as we make decisions,” Southeastern Conference Commissioner Greg Sankey told AP before Wednesday's meeting.

The 12-team plan was designed to increase access to the playoff, which would in turn increase the number of teams playing high-stakes games late in the season.

The proposal called for a selection committee to pick the six best conference champions plus six at-large teams, regardless of conference affiliation.

With 12 teams, the four top seeds would get byes, and teams 5-12 would play at home sites in mid-December, possibly as soon as the week after conference championship games.

That extra tier of games creates potential issues such as teams playing during finals and schools in cold-weather locations needing to spend millions of dollars to winterize stadiums —- some of which have little chance of ever hosting a playoff game. There are also health and safety concerns about players —- unpaid players —- participating in as many as 17 games in a season.

Cutting down to eight helps address those issues — but which eight?

Automatic bids for as many as six conferences and two at-large spots doesn't work for the SEC, which history suggests could routinely place three or four teams per season into an open field of eight. It probably doesn't work for Notre Dame, either.

Sankey has said that any format that decreases the number of at-large bids from the current four would be difficult for the SEC to support. A format like that could conceivably leave teams ranked in the top eight — maybe even the top five —- out of the playoff for conference champions ranked much lower.

However, eight CFP teams without automatic bids is a nonstarter for the so-called Group of Five conferences. The American Athletic Conference, Mountain West, Mid-American Conference, Conference USA and Sun Belt already view the CFP as stacked against them.

“What's the point of doing this if you're going to leave out half of college football?” AAC Commissioner Mike Aresco said.

The whole point of going to 12 teams was to provide a solution to the access issue. So why not just stick with the plan? See above for concerns about that extra round of games, but there are other sticking points, the biggest of which could be the Rose Bowl.

THE GRANDDADY OF THEM ALL

The Rose Bowl has historically been viewed as a stumbling block in the evolution of college football's postseason. The Big Ten and then-Pac-10 didn't even participate in the initial iteration of the Bowl Championship Series, the Bowl Alliance. The Rose Bowl, with its grand stage and valuable New Year's Day time slot, was good enough.

Over the years, the Big Ten and Pac-12 ceded some access to the Rose Bowl and even some of its revenue. At a time when conferences are furiously competing with each other and in need of every last dime to do so, the Pac-12 and Big Ten aren't rushing to relinquish more Rose Bowl exposure and revenue.

Ideally, the Rose Bowl and its partner conferences would like an expanded playoff built around a traditional Rose Bowl, matching Pac-12 and Big Ten as much as possible and kicking off on Jan. 1 at about 5 p.m. EST.

Is that easier with eight rather than 12?

ESPN's current 12-year contract gives it exclusive rights to the College Football Playoff through the 2025 season, no matter the current format.

Is there a way to get around that exclusivity?

That's a significant question to which no one involved with the CFP has given a clear, public answer because the terms of the deal with ESPN are confidential.

The strategy for the CFP could be to offer some type of extension to the current deal to ESPN, maybe allowing the network to lock in the semifinals and/or championship game for six additional years in exchange for the right to bring the new inventory —- eight more games in a 12-team format —- to other networks for bidding.

Bringing an expanded CFP to market has become especially important to the conferences (Pac-12, Big Ten and Big 12) that currently partner with both Fox and ESPN. Those leagues have media rights deals of their own coming up in the next four years.

Hancock said if the goal for expansion is implementation by 2024, then issues need to be hammered out in the next few months.

“I think we're just answering questions,” Thompson said. “This is a very detailed if not complicated process that's going to take more deliberation, which we’ll do in Chicago.”