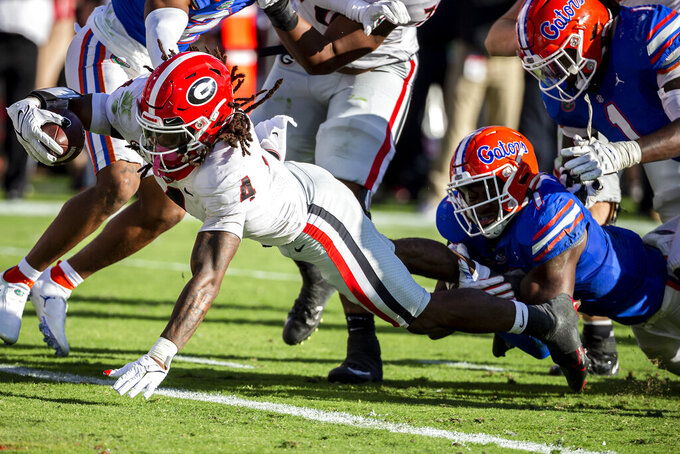 Georgia running back James Cook (4) stretches the ball across the goal line for a touchdown during the first half of an NCAA college football game against Florida, Saturday, Oct. 30, 2021, in Jacksonville, Fla. (Stephen B. Morton/Atlanta Journal-Constitution via AP)

—Felix Anudike-Uzomah, Kansas State, had four sacks and forced two fumbles to help lead the Wildcats to a 31-12 victory over TCU.

—Caleb Williams, Oklahoma, threw for 402 yards and six TDs and the No. 4 Sooners finally put together a complete game, rolling past Texas Tech 52-21.

—Kyren Williams, Notre Dame, ran for 199 yards and raced 91 yards for a TD early in the fourth quarter to help the No. 11 Irish hold off upset-minded North Carolina 44-34.

—Jake Bentley, South Alabama, threw four TD passes in the first half of a 31-13 win over Arkansas State.

—Jake Chisholm, Dayton, rushed for 157 yards and scored four TDs to lead the Flyers past Butler 38-31.

—Trae Self, Stephen F. Austin, threw for 346 yards and a career-high five TDs in a 41-27 win over Abilene Christian.

—Andrew Body, Texas Southern, accounted for 392 yards and five TDs in a 59-17 victory over Arkansas-Pine Bluff.

Kenneth Walker earned the right to stump for Heisman Trophy votes and humbly refused, shaking off questions about the coveted award as if they were linebackers trying to tackle him.

The Spartans trailed by nine at halftime and 30-14 with 6:47 left in the third quarter before rallying as Walker boosted his chances of being selected college football’s most outstanding player.

Facing adversity for the first time in more than a month, Ohio State showed off the mettle the Buckeyes believe they’ll need to get through the rest of a rugged Big Ten schedule.

TreVeyon Henderson ran for 152 yards on a season-high 28 carries and No. 5 Ohio State made just enough long plays and short field goals to hold off No. 20 Penn State 33-24.

The Buckeyes finally finished off the Nittany Lions on Noah Ruggles’ fourth field goal, a 26-yarder with 2:41 left to make it a nine-point lead.

92_Percent of his passes (36 of 39) completed by Mississippi State's Will Rogers to break a SEC record.

Raise a glass to Georgia’s defense. Or three, actually — one for each second-quarter turnover that turned the rivalry known as “The World’s Largest Outdoor Cocktail Party” into another lopsided affair.

The top-ranked Bulldogs and the nation’s No. 1 defense dominated Florida, scoring three touchdowns off miscues in a 12-play sequence that carried them to a 34-7 victory, their fourth in five years in the neutral-site game.

Georgia won its 12th straight since getting steamrolled in Jacksonville a year ago. The Bulldogs’ injury-riddled defense allowed 571 yards in that one, the most in coach Kirby Smart’s six seasons.

Georgia vowed to not let it happen again and responded with another demoralizing effort that might be their most impressive all season.

The Gators finally got on the scoreboard with 2:49 remaining, extending their scoring streak to 418 games. They have scored in every outing since getting shut out by Auburn in 1988.